The northern boundary of Yosemite National Park follows a ridge that runs east/west, and starts, on the west, with Tower Peak, and then continues eastward with Ehrnbeck Peak, Crown Point, Slide Mountain, the Sawtooth Ridge and Matterhorn Peak. Tower Peak can be seen, far to the south, from the Sonora Pass highway (Hwy 108).

An extreme telephoto shot of Tower Peak from Hwy 180, view to the south. 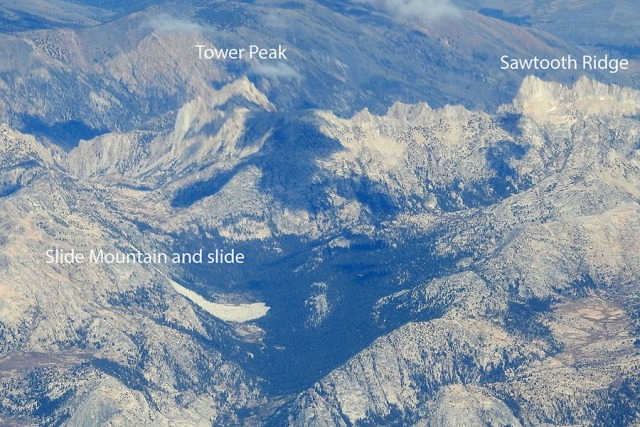 The Sawtooth Ridge, Matterhorn Peak and others to the west, seen from Bridgeport, CA. 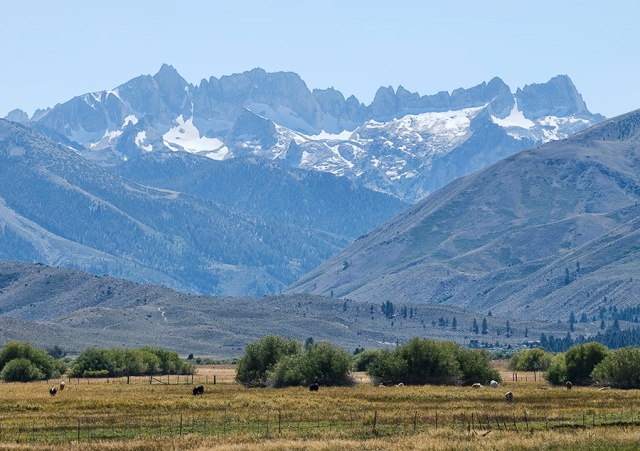 From L. to R.: Matterhorn Peak and Sawtooth Ridge

One can get a much closer look at these peaks from Twin Lakes, which is located at the foot of the ridge 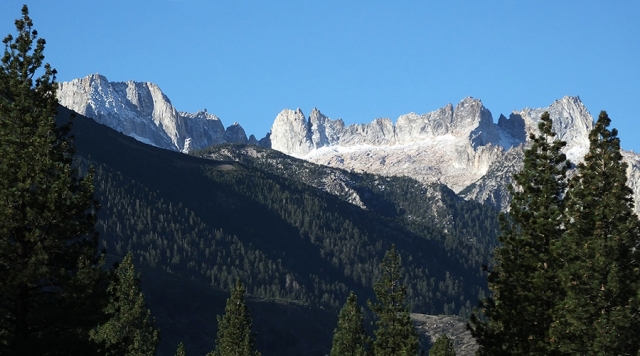 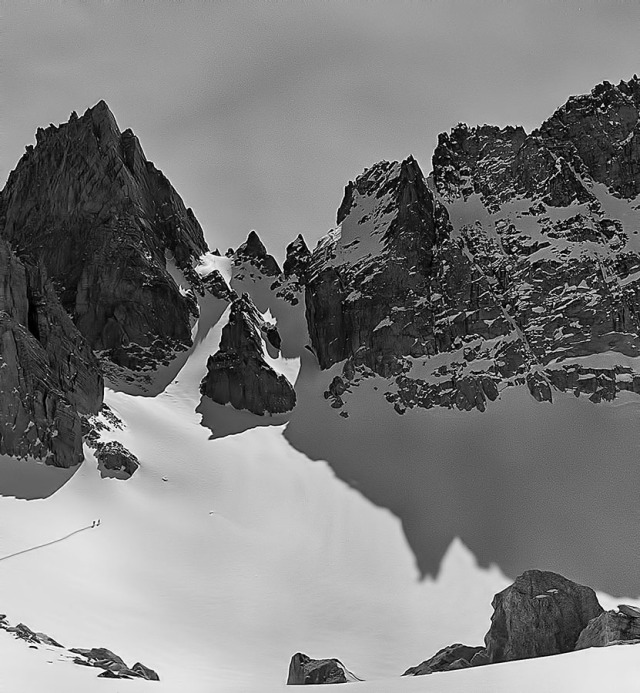 During the summer of 1971, I worked for the California Outward Bound School. We were headquartered at a mothballed Marine mountain warfare base, at Pickel Meadow, on the Sonora Pass highway. The base has since been reopened.

From Hwy 108, we followed the West Walker River upstream to the base of Tower Peak.

On the slopes of Tower Peak 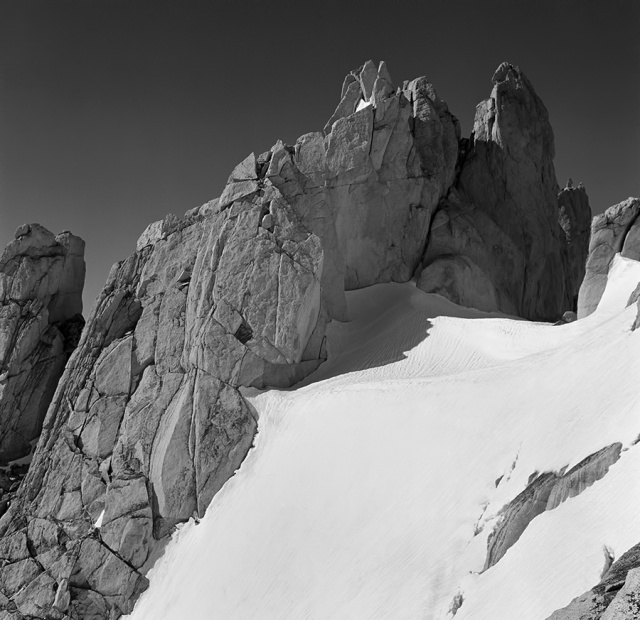 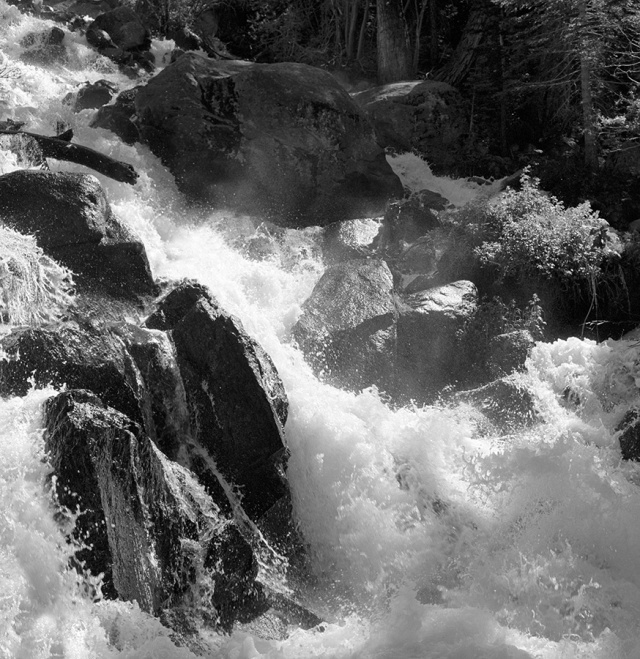 From Tower Peak, we moved eastward. 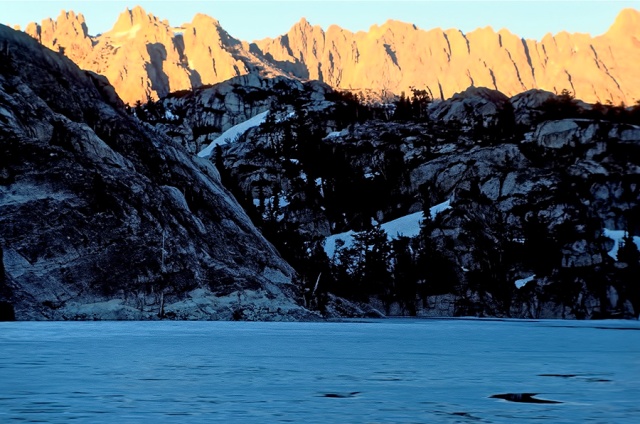 In the vicinity of Crown Pt. 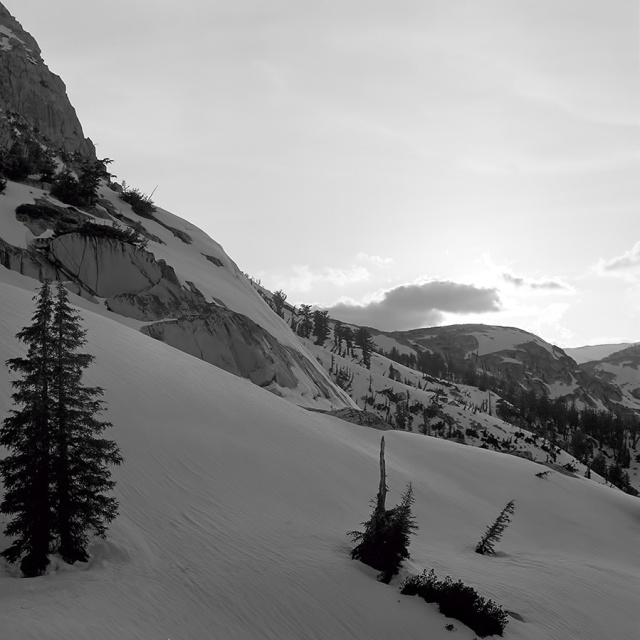 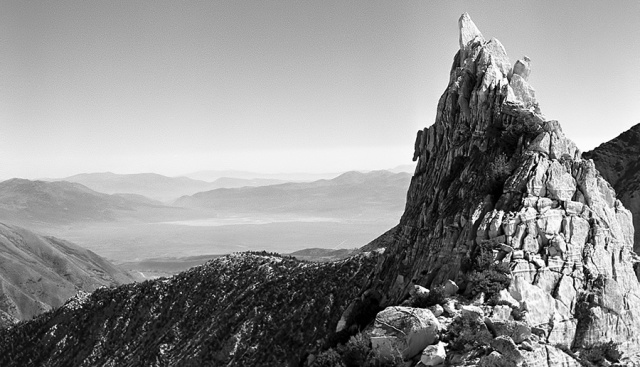 On the Sawtooth Ridge, with the Bridgeport Valley and Reservoir in the distance 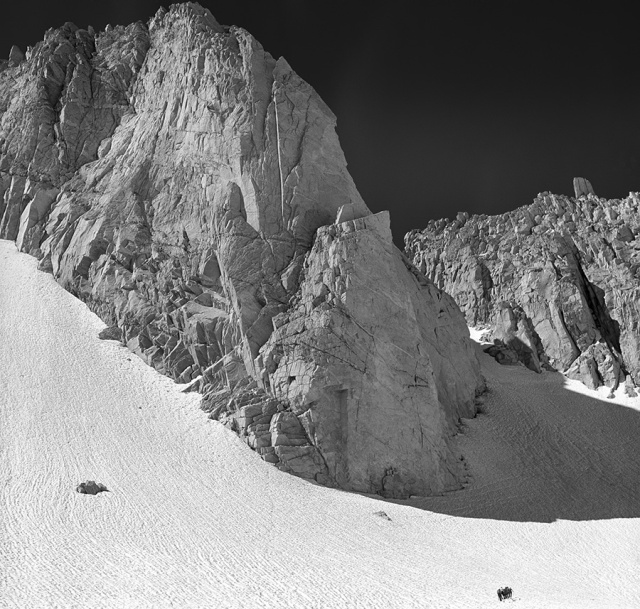 Matterhorn Peak, view to the north 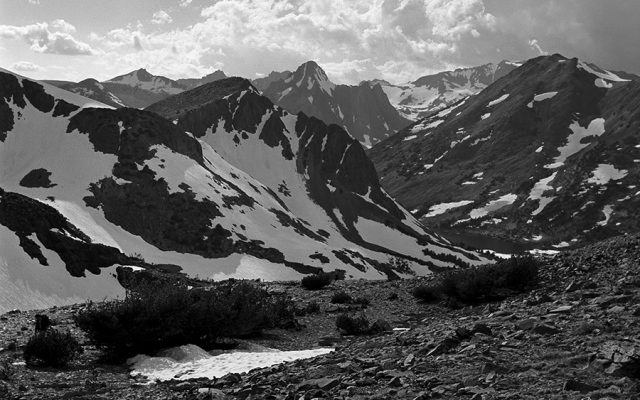 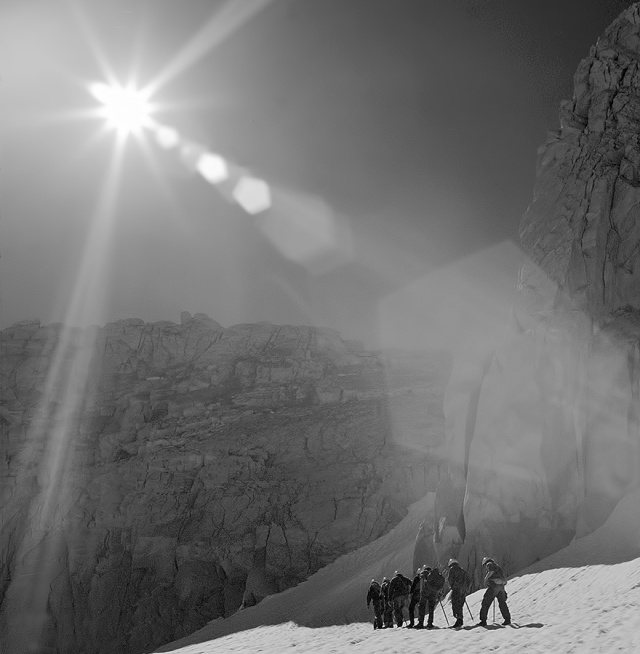 From Whorl Mountain, we headed down Matterhorn Canyon, to the south

From the mouth of Matterhorn Canyon, we headed east to the Mc Cabe Lakes and Mount Conness. 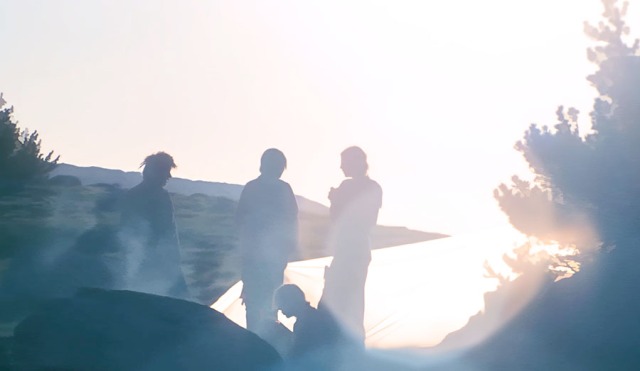 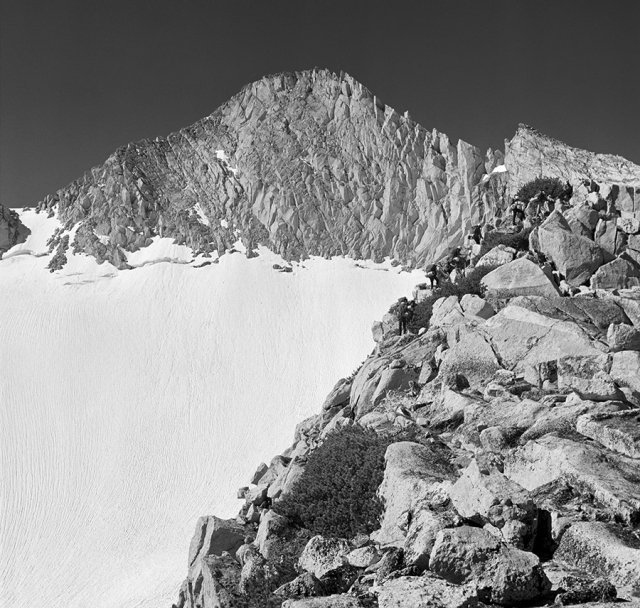 On the ridge between North Peak and Mount Conness (North Ridge), with the Conness Glacier below

North Peak (Southwest Airlines flight), view to the south. Mt Conness is just out of the photo, at top.

On the North Ridge of Mt. Conness

We next traveled south and east, to intersect the Tioga Road, near Tioga Pass. There, we picked up a resupply and continued south via Parker Pass Creek, from which we climbed onto the Kuna Crest at its northern end.

Traversing the Kuna Crest. Mt. Lyell and Lyell Glacier are seen in center. 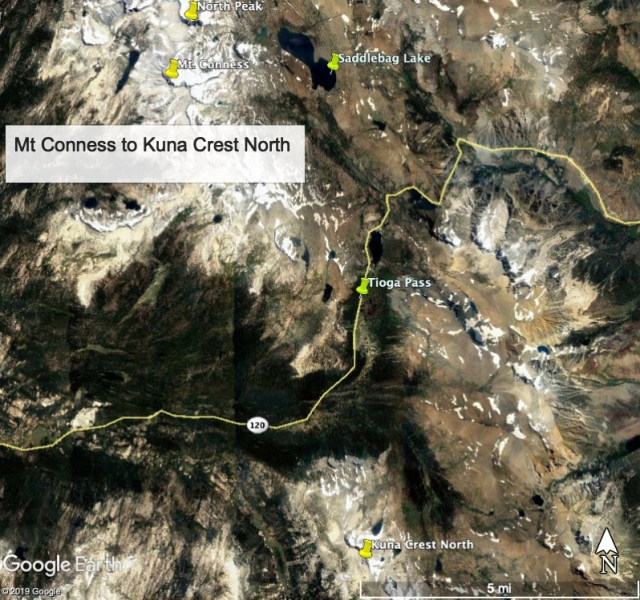 We descended the southern end of the Kuna Crest and headed for Mt. Lyell (13,114′). Mt Lyell is at the southern extremity of the Cathedral Range.

Side-trip to Donohue Pass. The Minarets Wilderness has been renamed, to the Ansel Adams Wilderness.

At the foot of Mt. Lyell

Climbing a snow chute to gain the summit ridge of Mt. Lyell

On the summit of Mt. Lyell. Banner and Ritter Peaks are seen to the southeast.

This climb ended the course. We had traveled extensively through Yosemite National Park, and seen very few others on the way. What a privilege! 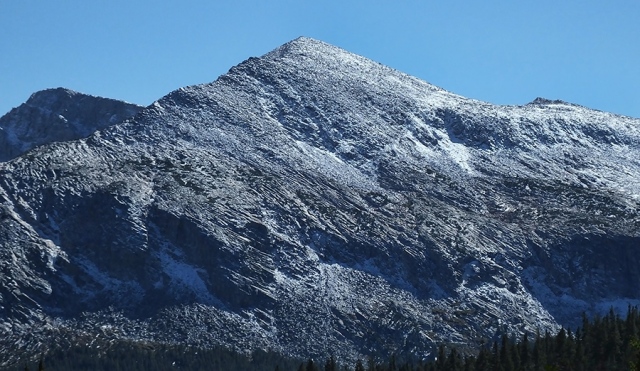 Mammoth Peak, at the northern end of the Kuna Crest, from the Tioga Rd. 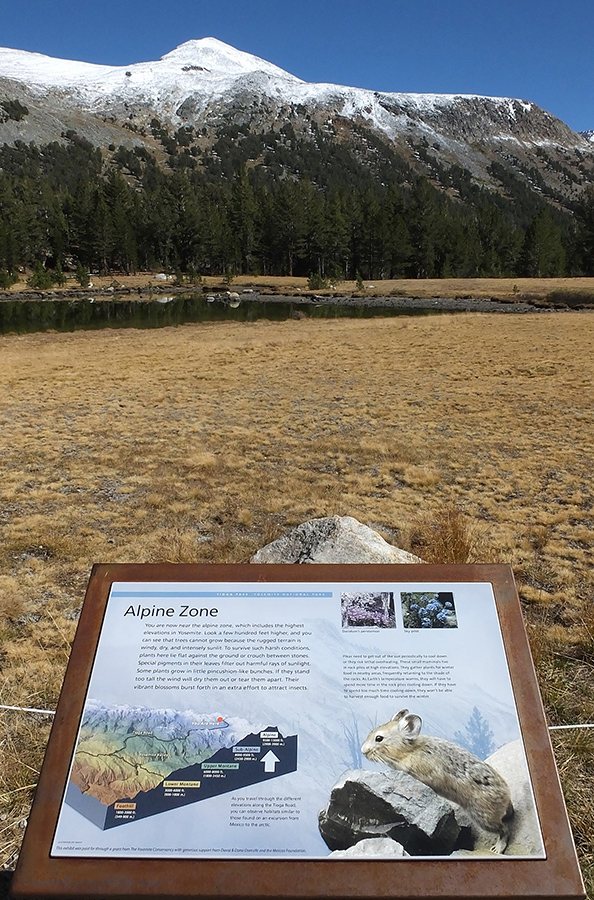 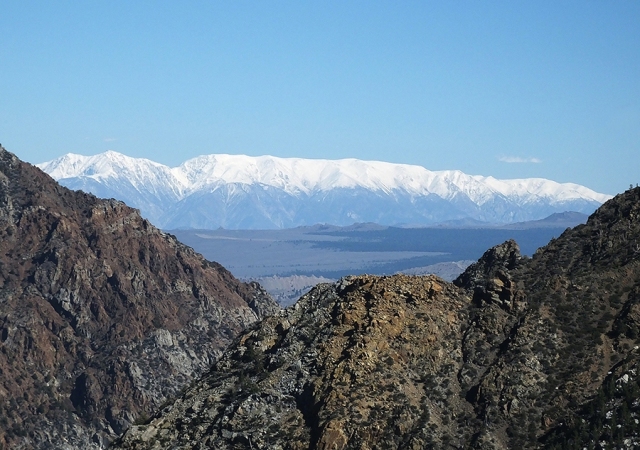 The White Mountains, from Tioga Pass 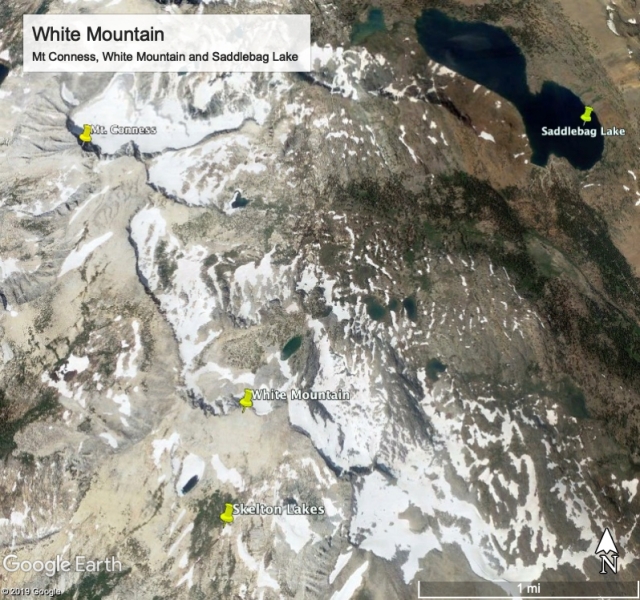 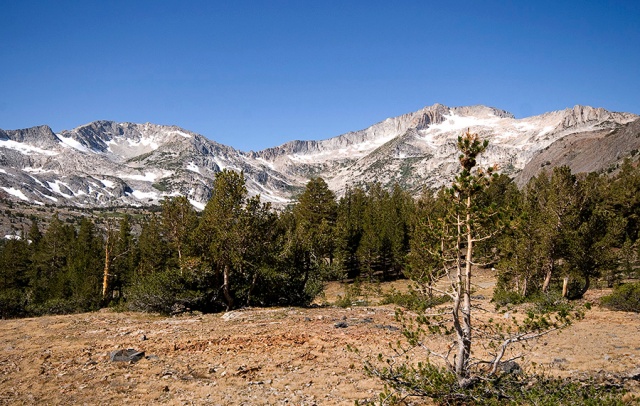 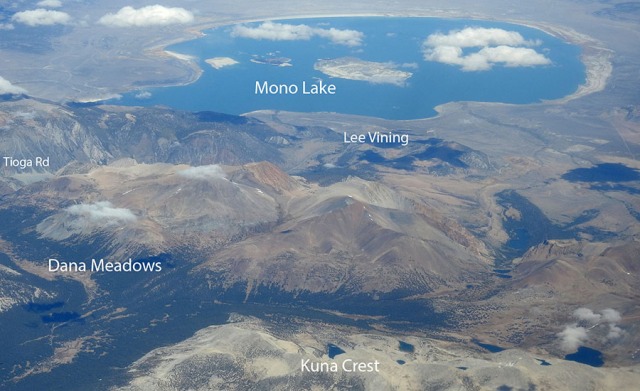 Western boundary of Yosemite National Park and Mono Lake, view to the east

View to the northeast, of Mt. Conness, White Mountain and Saddlebag Lake

same as above, but a wider view 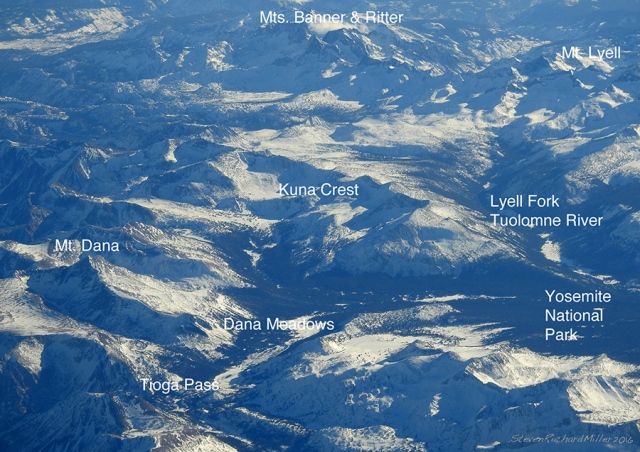 Kuna Crest, view to the southeast

View to the southeast of Yosemite NP and Ansel Adams Wilderness, to Mammoth Mountain Ski Area