The River Has No Right to Water

The Rio Grande Compact governs the distribution of its waters between the two above-named states, and Texas and Mexico. That agreement gives the lion’s share of water to the farmers of the San Luis Valley. Deliveries of water are accounted for by the year – how much you get and/or must pass downstream in a calendar year. Since the irrigators have no need of water during the winter, they let the river flow un-diverted through the Valley in the winter months. And what water passes downstream during the pre-irrigation months of the year is credited as a delivery to the downstream entities for that calendar year. With this credit in their back pocket, the irrigators can then divert to their heart’s content come summer.

What happens at the end of the irrigation season? The snowmelt is long past, and the river is low as it enters the San Luis Valley. And lower yet when it exits the Valley. Diversions at that time of year may leave precious little water in the river downstream of the diversion points. Here is the river in early September of 2011, at the Manassa Bridge, upstream of the Rio Grande Gorge, in Colorado. 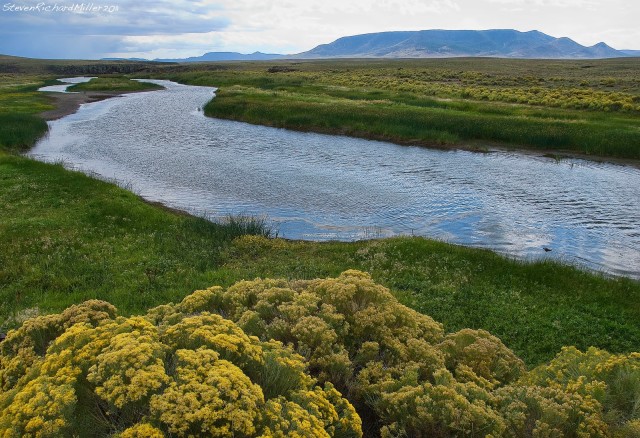 What you are seeing here is a tepid little creek, not the “Rio Grande” – although it is the Rio Grande. The flow is somewhere around 25 cubic feet/second (cfs). We waded across and it never got more than knee deep. Leaving so little water in the river at that time of year is standard operating procedure, since required deliveries for the year were made during the preceding winter months of the new year. And, BTW, this is what the river probably looks like right now, at the beginning of July.

So … what about this year, with its probable record low runoff? According to the Denver Post of June 25:  “The main stem of the Rio Grande probably won’t make it out of Colorado to New Mexico this summer, state water authorities calculate, let alone Texas and Mexico.”  They are telling us, in other words, that they are going to let the river dry up where it exits the Valley. Will they, at the same time, be diverting upstream in the Valley? Most certainly. They will be diverting all that remains of the river, every last drop of it. And, they are entitled to do so. They have met their Compact obligations with the deliveries made earlier in the calendar year.

I’m not mad at the farmers up in Colorado. They’re just trying to make a living. What I am mad about is the fact that the river has no right to water. Nowhere in the Rio Grande Compact is it stated that the river will not be allowed to dry up. There is no guarantee of a minimum flow to sustain the fishes, frogs, turtles, herons and riparian ecosystem. To repeat, the river has no right to water.

Fortunately for northern New Mexico, springs in the Rio Grande Gorge will, to some degree or other, replenish the river. Or, at least until they run dry. But that will not help those farther downstream. Not for the first time, the river has run dry in the vicinity of Socorro, upstream of Elephant Butte Reservoir. We are now in uncharted territory, and we’ll all probably be a lot sadder and wiser by the time this summer is over.