We started the day with Quartzite Falls Rapid. This rapid used to be called, more simply, Quartzite Falls, because it’s most notable feature was a low but gnarly falls that usually called for either a portage or lining of your boats. Why the name change? Well … to make a  long story short, in the late fall of 1993 some boaters carried dynamite into the Canyon and blew the falls apart. Here’s what it looked like before its demolition:

The verticality of the drop created a very severe “backwash” (aka hydraulic), which could and would trap those boaters foolish enough to run the falls and, on a few occasions, drown them.

Raft gets sucked back in, at Quartzite Falls, in low water. The stress on the boat popped a thwart. Note the guy at the ready with a throw-rope, on photo left.

This warning was painted on a slab upstream of the falls:

But you could, and we did, run the falls at VERY low water. 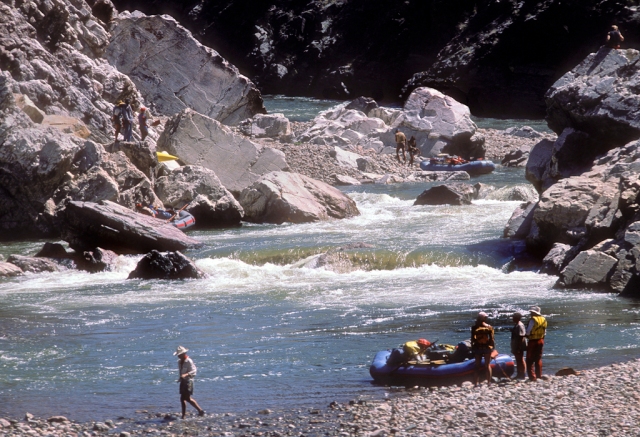 Back to Quartzite Falls Rapid in 2017. It was observed the day before that you could run the right-hand channel between a line of rocks (to your left) and the cliff on the right. This would carry you into the perfect position to take the drop straight-on. If, on the other hand, you approached by way of the main channel, the current would direct you into the left wall, requiring that you back away from that wall before setting up for the drop. This was more problematical, so we chose the line that had been observed.

Below: Video of Quartzite Falls Rapid, Mile 31.7. Britt is seen ahead of us.

Below: Video of Flo and Ethan in Quartzite Falls Rapid. They bump into the center rock, but no prob.

Immediately below Quartzite is Corkscrew Rapid.

Below: Video of Corkscrew Rapid, with Ethan/Flo and then Britt. This video was shot with my Coolpix P900, from the  cobble island that is located at the downstream end of the pool below Quartzite.

The narrowest spot on the river is found just below Corkscrew.

Below: Video of Britt and the quartzite monolith seen to his downstream side. Britt is proud of the fact that he ran Corkscrew without knocking his beer over. There is a small campsite amongst the fabulous quartzite rocks at this spot, Mile 31.9

Immediately downstream of this camp is Sleeper Rapid, Mile 32.

Below: Video of Sleeper Rapid

One of the last whitewater challenges on the river is making sure that you don’t broach against the cliff, at Cliffhanger Rapid, at Mile 34.3. Of course, we’ve done that for fun, in low water.

Below: Video of Cliffhanger Rapid, Mile 34.3

Broached at Cliffhanger Rapid … (photo taken on prior trip)

and flipped (photo taken on prior trip) 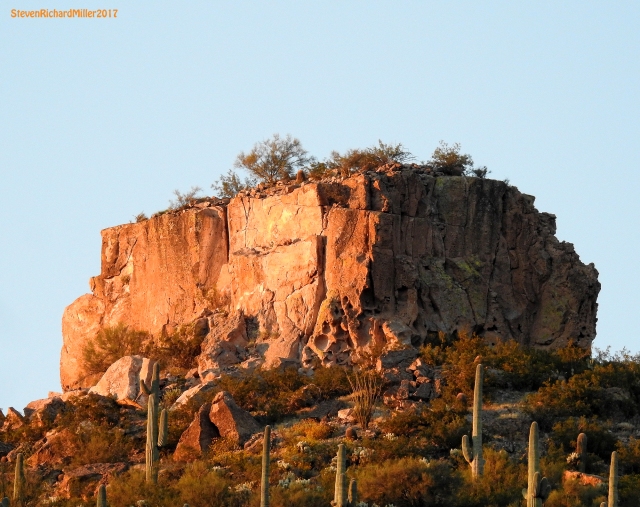 Our name for this little mesa is Bunny Butte, which stands above the mouth of Cherry Creek, at Mile 35.9.  It is made of volcanic ash, and has some steps cut into that soft rock, which steps can be found on the east side of the formation. 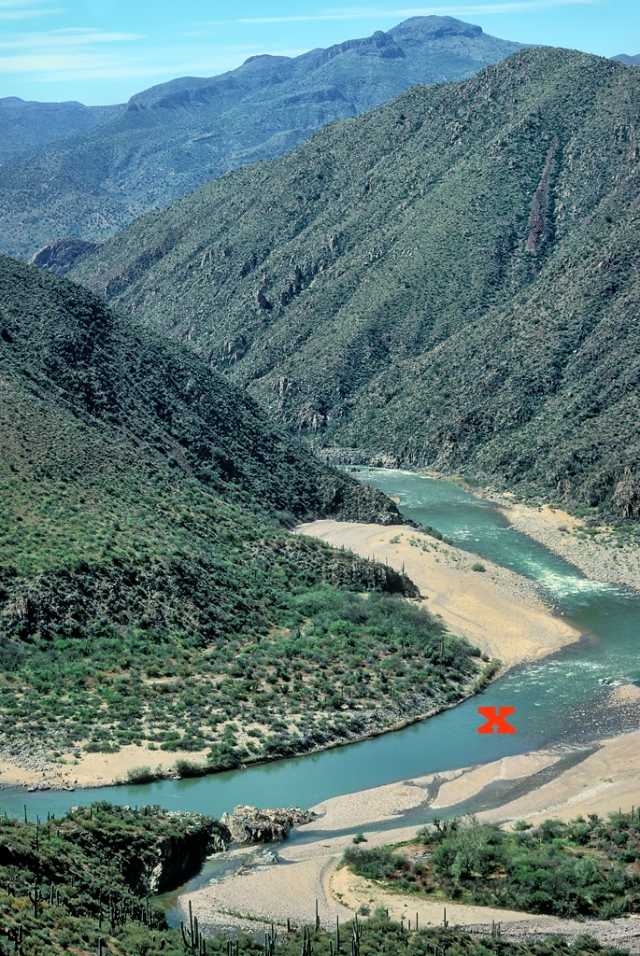 Seen from atop Bunny Butte, Cherry Creek enters on river-right, Mile 35.9. Cherry Creek Camp is seen on river-left. In this photo from 1995, note that the river channel at the red “X” is completely unobstructed.

Downstream view of the river channel at the point marked with a red “X” in the above photo. Formerly unobstructed, the river is now filled with islands, small channels and lots of vegetation.

Cherry Creek has forever been a favorite short hike, with cathedral groves of cottonwoods and sycamores, and lots of birds. But, we were cautioned that a flood had trashed the creek, making the hike a difficult prospect. So we took a pass on it. 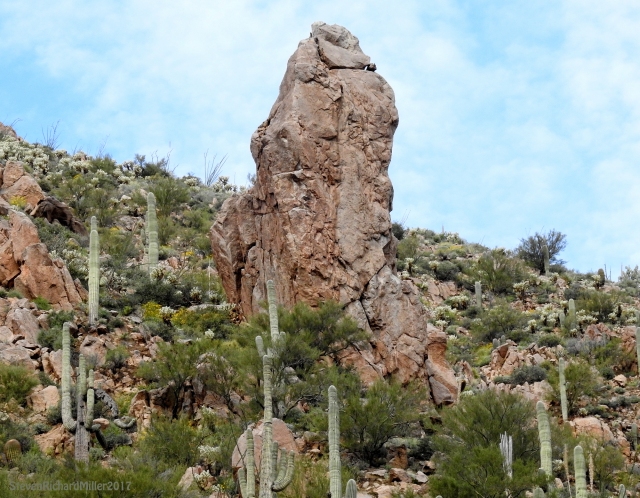 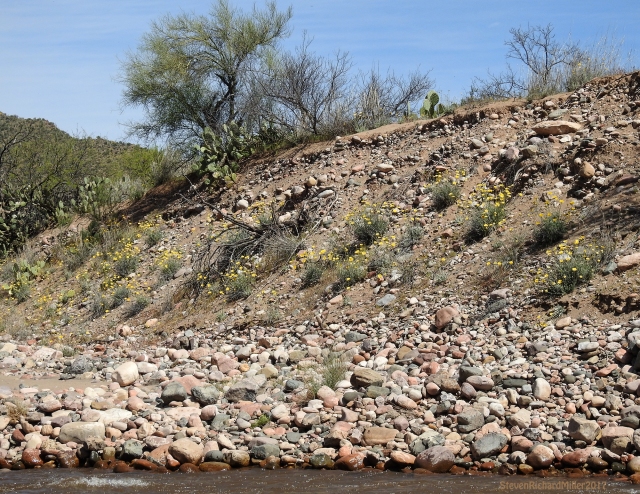 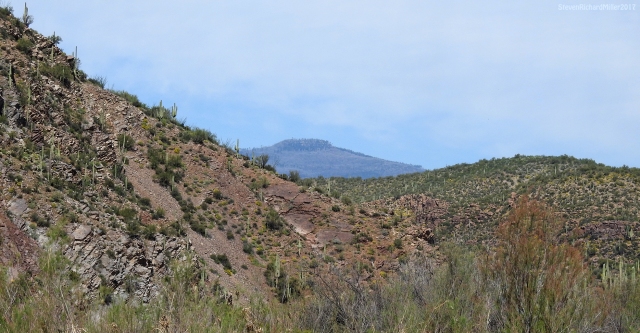 In the distance, the Sierra Ancha, which feeds Cherry Creek

The river again cuts through the White Ledges, Mile 40

Just downstream of Coon Creek, the Dry Creek Camp is actually located at the mouth of Chalk Creek, Mile 45.2.

We did 19.5 miles on this day, to position our last camp close to the take-out. This would provide us with an early start for home the next day. 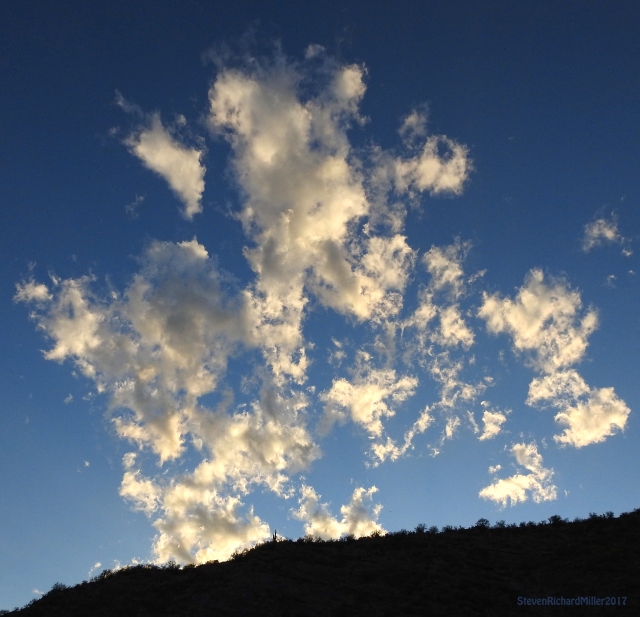 Hooded oriole, at our last camp

Our last morning, with 2 miles to the take-out. 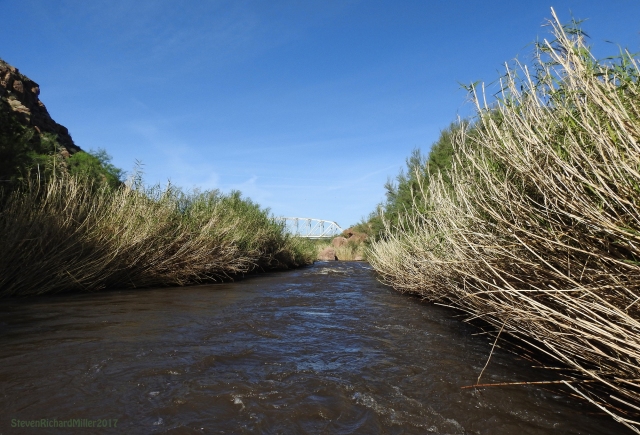 The Hwy 288 bridge, seen through the encroaching reeds, Mile 52.4

We got away from the take-out in mid-morning, and back home (Embudo, New Mexico) before dark, while Flo and Ethan returned to Phoenix and then California. It was another great trip on the Salt – certainly the second most amazing river in Arizona!

It can be assumed that, in the absence of preventative measures, tamarisk, reeds and cat tails will continue to take-over the riparian zone of the Salt River. Tamarisk can be controlled by the Tamarisk beetle, which has been introduced with good results on the Colorado River. I asked the USFS why they hadn’t introduced the beetle on the Salt. Their reply was that they were lobbied by AZ birding groups who saw the tamarisk as desirable habitat for birds. But the beetle will likely arrive on its own, one of these days. Otherwise, I’m guessing that only a massive flood is capable of tearing out the established tamarisk and reed, with the former the tougher of the two.