The Golden Ghost of the Rio Grande

Along with brown and rainbow trout, smallmouth bass and great northern pike, carp also are found in the Rio Grande. Lately, with the water very low and fairly clear, I’ve been seeing carp swimming slowly around in a few eddies. It helps to be high on the bank or roadside, and wearing polarized glasses.

Every so often, one accidentally hooks a carp on a Woolly Bugger or similar fly, and it’s always a surprise because they are much bigger than most of the other fish in the river, and can easily break a 4X or lighter tippet.. Yesterday evening, having spotted a number of large carp in an eddy, I decided to give them a try. After fishing dries for trout on the wade down to the position I had decided upon, I put on a long 3X leader and a fly I had tied years ago, for a trip to the San Luis Lakes, in southern Colorado. These shallow lakes are known for their populations of carp. The fly was called Carp Candy.

The fly is the essence of simplicity, being constructed of leech yarn, sili legs and a bead for weight, on a #8 long shank hook. My feeling is that the fly choice is much less important than the presentation. Anything buggy-looking should do

I stayed back from the eddy, and cast into the adjacent riffle, feeding some line out. The line straightened, and was then slowly carried into the eddy. When the line arrived over the spot where I had seen the carp, I began a slow retrieve, with the idea of keeping the fly on the bottom. Within 10 casts, I got a strong tug. My strategy had worked! The large and powerful fish went way into my backing, but I could pressure him because of my heavy leader. 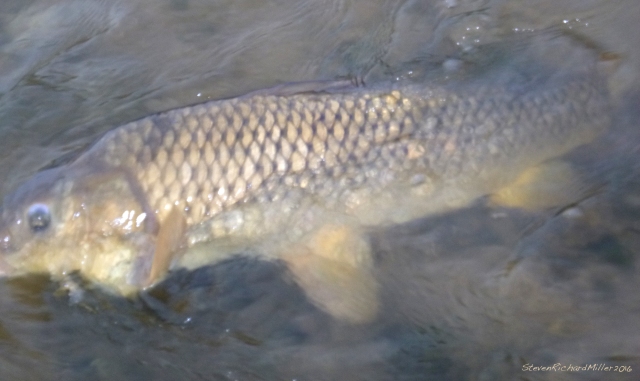 Not a great photo of the carp, but the best I could manage with the rod in one hand and camera in the other.

Why is the carp called the Golden Ghost? It’s a take-off of the name for the bonefish – the Silver Ghost. Sight-fishing for carp in shallow water resembles the same for bonefish – at least in the minds of those who specialize in it. Perhaps it’s an attempt to gain some respect for the carp, which is not, to my mind, a particularly attractive fish. Here’s what Wikipedia has to say about the carp: “The common carp or European carp, (Cyprinus carpio) is a widespread freshwater fish of eutrophic waters in lakes and large rivers in Europe and Asia. The wild populations are considered vulnerable to extinction, but the species has also been domesticated and introduced into environments worldwide, and is often considered a destructive invasive species, being included in the List of the world’s 100 worst invasive species.” The carp roots in the bottom, and muddies the water of otherwise clear-running streams, degrading the river ecosystem overall. Ah, the lowly carp!

I could not catch a second carp, and returned to fishing for trout. I caught this brown trout just a few yards away.