Christmas Island, 1997. Christmas Island has been a saltwater fishing mecca for decades, with bonefish its prime attraction. Kathy and I had been combining bonefishing and diving in the Caribbean for a while, and decided to do same at Christmas Island. We arranged our trip there with Frontiers Travel.

Christmas Island (Kiritimati, pronounced Kirisamass) is one of the Line Islands group and located at the eastern end of the country of Kiribati (pronounced Kiribass), which stretches across two thousand miles of the equatorial Pacific. At the western end is the island of Tarawa, which saw fierce fighting in WWII. In the vicinity of Christms Island, the International Date Line, which would otherwise pass to the west of the island,  jogs to the east and back again, to include Christmas Island in the same day as the rest of the country. It lies at approximately 10 degrees north latitude, and is about one thousand miles south of Hawaii. It is populated by Micronesian people.

One flies to Christmas Island by way of Honolulu, so we decided to spend some time in the islands beforehand, part of which would be in the company of Kathy’s folks, Raymond and Rainie. Kathy and I first did the popular multi-day hike along the Napali coast of Kauai, meeting-up with Kathy’s folks afterwards .

We all visited Volcanos N.P., on the Big Island, where Raymond and Rainie treated us to a helicopter tour of the active vent, which was extraordinary.

It was a three-hour flight to Christmas Island.

Loading up luggage and fishing rods at the Christmas Island airport 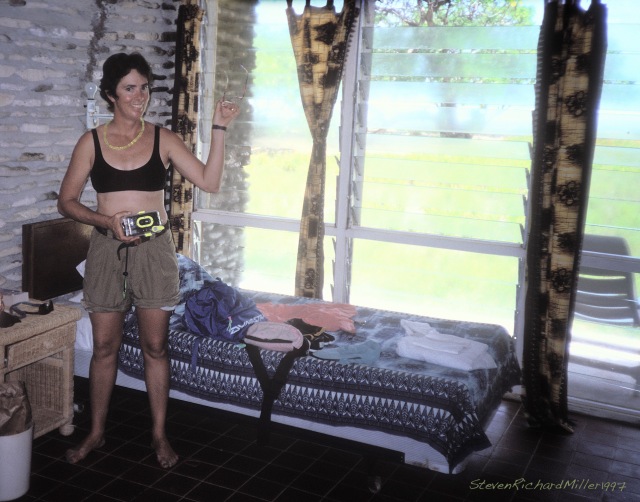 Kathy, in our cottage

We had the best cottage! The walls were made from plate coral, stacked like bricks. An ocean-side lagoon, with reef beyond, was right outside. But this proximity to the water led to big land crabs getting inside the cottage. They were a force to be reckoned with! 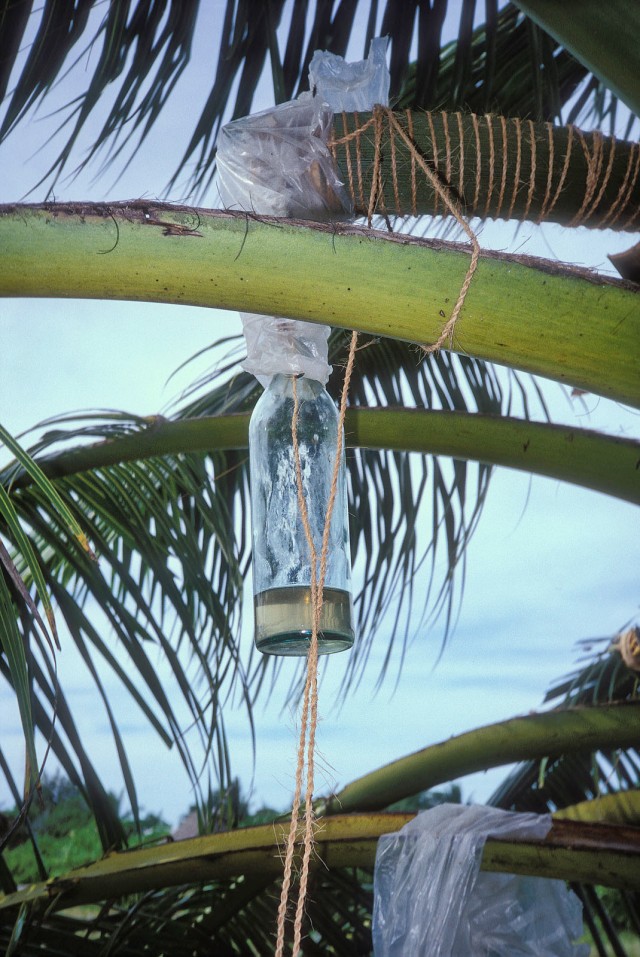 Collecting palm sap to make wine, outside our cottage 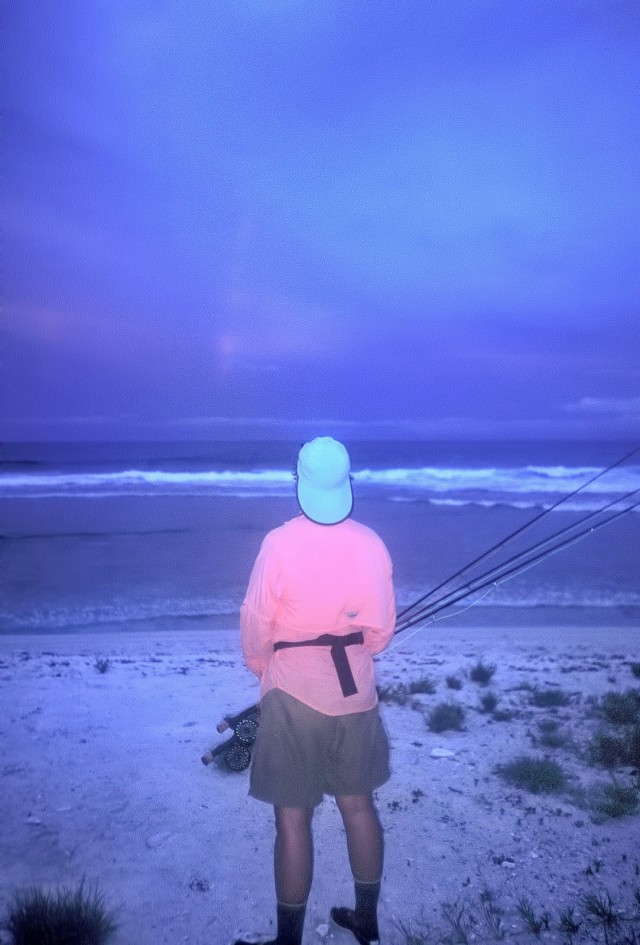 The lagoon and reef 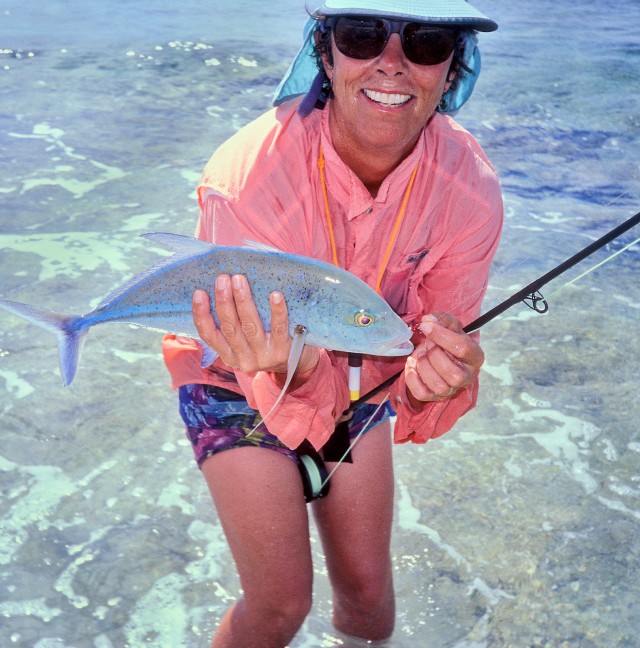 Kathy caught this Blue trevally in the lagoon, just steps from the cottage

I had brought a spinning reel to put onto my 11 weight fly rod, so I could cast lures to the the Giant trevally that patrolled the reef. I hooked a big one who ran against a lot of drag, and then cut me off on the coral of the reef top, which was barely covered. 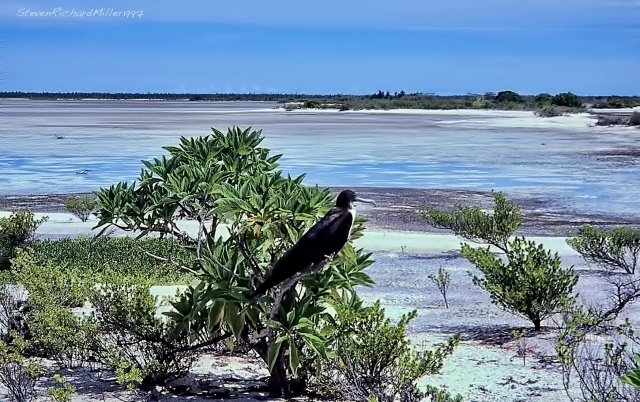 Frigate bird and flats beyond

The “lodge” was a former British military facility, from the days of atomic bomb testing. There were very many military vehicles and other stuff rusting away under the palm trees. The island is an atoll, with a huge central lagoon, and is 90 miles in circumference. 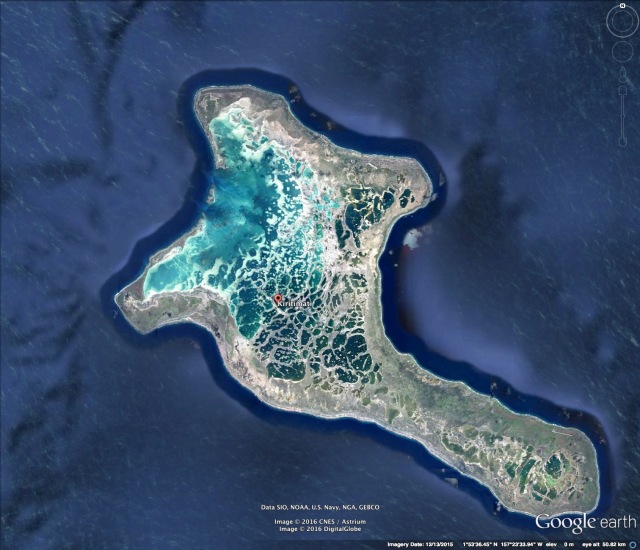 The bonefish were to be found in the lagoon, on the “flats” – large expanses of shallow water with a firm sandy bottom. The bonefish traveled on and off the flats with the tides. They could be spotted in the ankle to knee-deep water, as they cruised around looking for food, or as they tipped up and nosed into the sand. Our flies were meant to imitate, in an impressionistic kind of way, those food items – shrimp, crabs and whatever else

Our guide here, Iotebe, was much better at spotting fish than ourselves, of course. The guys in the boat were fishing in a channel of deeper water, for milkfish. They sang the entire time. I asked Iotebe what they were singing about – happy or sad songs? Happy, he said. 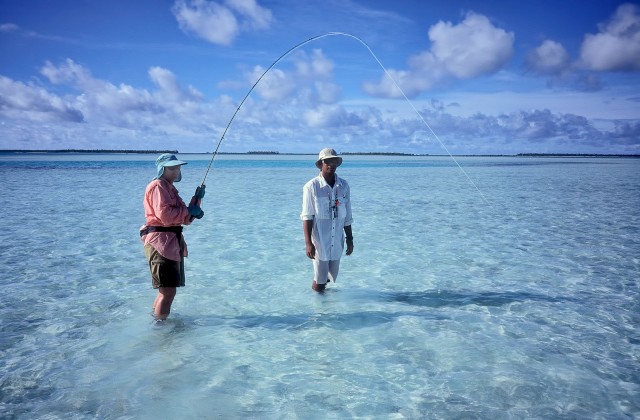 Look at that water! The flats are a magical place.

This bonefish went for a simple orange beadhead fly

We accessed different flats by road, riding in the backs of small pick-up trucks. The flats went on and on.

A larger bonefish. Bonefish are noted for the speed of their runs, since they are often having to out-run larger predatory fish.

The launch took us to isolated pancake flats

We also went diving, and trolled lures on the way to the dive locations. We caught giant trevally, the largest member of the jack family, which fight harder than any other fish you’re likely to tie into.

The outrigger dive canoe. It’s stern went under as we ran up the waves at the cut. 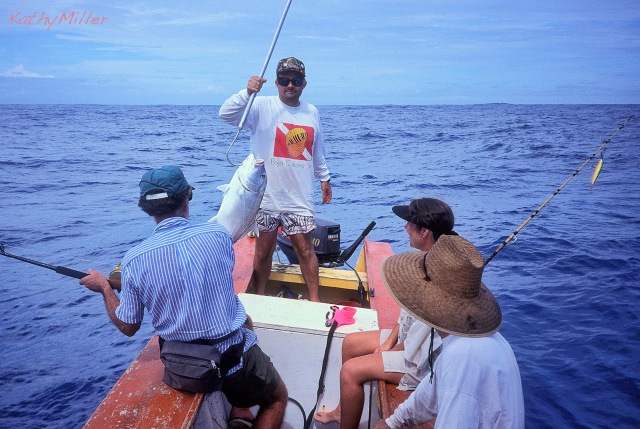 A “GT”, or Giant trevally

The diving was nothing out of the ordinary, as far the coral went, but very large GTs would swim right up to us, and give us a look-over. WOW! We also came upon a group of melon-headed whales, and jumped overboard to watch them.

When the weather brought big waves to the off-shore dive sites, we went shore diving on the lee side.

Between dives, I fished in the little cuts in the shoreline coral. Different species of fish grabbed my flies,  like this snapper,

and this Christmas wrasse (named for the island?), which may be the most psychedelically-colored fish I’ve ever seen. Sorry that the photo is out-of-focus, but you can still see what a fantastic fish it is. This wrasse took a large green popper.

Another walk to the flats

The vast flats. How cool is that! 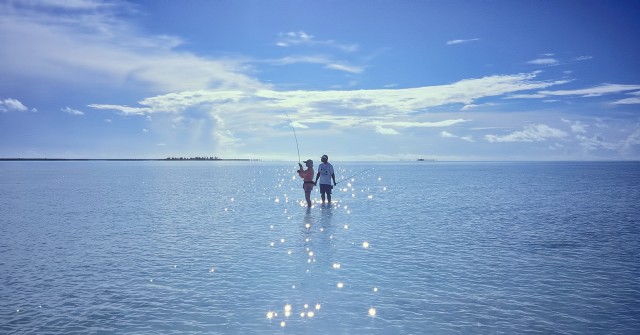 Kathy fighting a fish.  Iotebe carries my 11 weight rod, in case we spot a GT on the flats

Kathy, with a fish. Here we were positioned to spot fish as they swam up and out of deeper channels on the incoming tide.

Returning in the rain. The rain makes it almost impossible to spot fish.

And I caught fish, too. This could be my biggest bonefish ever! I caught it on the same fly Kathy was seen using, in an earlier photo. 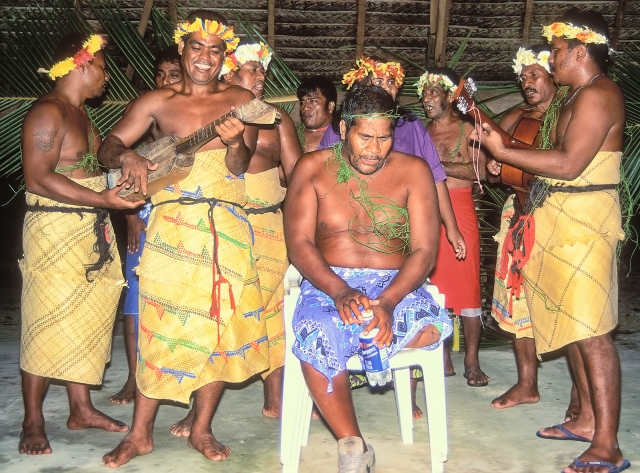 On our last night, we were treated to some entertainment and a 80 lb. GT grilled over charcoal. The man seated in the middle lost his lower leg from the bends. The islanders dive for tropical fish, and don’t always pay attention to the dive tables that tell them when they need to come up. This unfortunate guy was pushed around in a wheelbarrow by his friends. The local dive company had a recompression chamber brought to the island at considerable expense, but couldn’t maintain a supply of oxygen for it.

Christmas Island was certainly one of the best fishing destinations Kathy and I have ever visited, with not only world-class bonefishing, but two or more species of trevally and other fish to catch. We would love to return, but we better do it before I get too feeble to spend a day out on the flats!