I can’t remember why I chose Stowe for my third ski-bum winter. It wasn’t a great choice. The skiing generally sucks in the East, and that winter was no exception. Rain storms were followed by severe cold snaps, until you could see the grass through the ice. The steeper of the two mountains, Mt. Mansfield, was closed part-way through the winter, because the icy conditions made skiing it too dangerous. So I got to ski on Spruce Peak, instead. It was normally so cold at Stowe, that the lift attendant would give you a heavy blanket to drape over yourself for the duration of the chairlift ride. 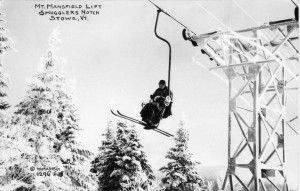 A local skier, by the name of Marvin Moriarty, would set slalom courses (or try) on a lower run of Spruce Peak. Slalom poles were then bamboo, and were stuck into the snow without the aid of a drill or other implement. Under these boiler-plate conditions, this resulted in Marvin breaking about one in three poles. He had a temper, and would hurl the broken poles into the woods with a curse, and then try again. When he got a course up, I would watch him ski it. He left deep chatter marks in the ice, a testimony to his strength. He was a rough and tough local, who was turned down by the US Ski Team because of his temper and love of fighting. His mother ran a knitting shop (which persists to this day), and produced what became an iconic ski hat – the three-peaked Moriarty hat.

I went through a succession of these hats. Mrs. Moriarty used a kind of wool that was as hard as steel and never wore out. The old lady would do custom hats, and I got one made out of variegated wool that I left in a car in Austria, while hitch-hiking. Damn, I liked that hat! My folks, who summered near Stowe, treated me to a Moriarty ski sweater, which I still wear, and I probably have a Moriarty hat stuck somewhere in a box.

My first employment in Stowe was at Skinger’s, a small ski lodge on the Mountain Rd, run by Connie and Joe Skinger.  Joe Skinger was a gold and silversmith, who invented the “slalom ring”.

I, of course, no longer have the ring he gave me. Joe was an unforgettable character, and always going on. In anticipation of the summer, he would complain of it’s “goddamn green”, for instance. He is now immortalized in Wikipedia:

I left that job to work in town, at The Whip, the bar that was attached to the Green Mountain Inn. The Inn is at the main crossroads in town, and I got a room a couple of blocks away in a crappy old building on Main Street. My sociopath friend, Dan McG, was also in Stowe, and may have been the reason that I chose Stowe, in the first place. It later occurred to me that he got pleasure from getting me to do things that, in hindsight, were very questionable! Some years after, he turned up in New Mexico, claiming to have found a miracle cure for bad eyesight from an Indian tribe in Mexico, where he also had a share in a gold mine. Of course, he talked me into introducing him to some potential investors in Santa Fe, who did invest and who got bilked. Dan was very good-looking, very suave, and very persuasive. He was a very good con man. He no longer comes around, I’m happy to say, but on our last visit with him, he cooked supper for Kathy and me, and ended up the evening talking me into giving him a “loan”. The loan, of course, remains unpaid, and I tell this story for it’s educative value.

At the end of the season, I left Stowe for New York City, where, not long after, I embarked on the SS Serbija, a Yugoslavian freighter bound for Tangiers, Morocco. This ship (or this line) was the one favored by the beatniks for a cheap trip to Morocco, where they could legally consume hashish. I, on the other hand, was going to Europe, to climb in the Alps.

The following post chronicles my trip to Morocco and beyond: