Kathy and I had yet to ski in Europe, although I was familiar with the Alps, having spent two seasons climbing in France, Switzerland and Austria a few decades prior. I knew for sure how much great terrain was available there. The only question was, where to go to get the very best skiing? My friends Linde and Lito did not have to think long to answer that question – Verbier! Nor did they have to think at all, to come up with a hotel – it was their favorite, the Hotel de la Poste.

Kathy and I would be joined by Kathy’s daughter Laina, who was doing graduate studies in England at the time. Verbier is in the French-speaking part of Switzerland (or Suisse), in the Canton of Valais, not far from Geneva. The train station is located directly beneath the Geneva airport, making the connection a simple matter. The train from Geneva follows the northern shoreline of Lake Geneva, and then goes south, up the Rhone Valley and into the mountains. We switched trains in Martigny, at the point where the Rhone Valley turns east. The valley separates the two major ranges of the Swiss Alps – the Bernese Oberland to the north, and the Pennine Alps to the south. The former is known for such peaks as the Eiger and Jungfrau, while the latter is known for the Matterhorn and Monte Rosa (the highest peak in Switzerland and second only to Mt. Blanc in Europe). Verbier is located toward the western end of the Pennine Alps, and not far from the French border. 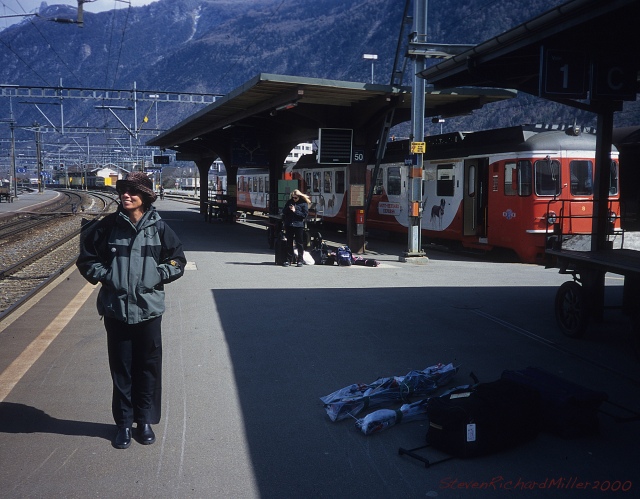 Kathy, at the train station in Martigny 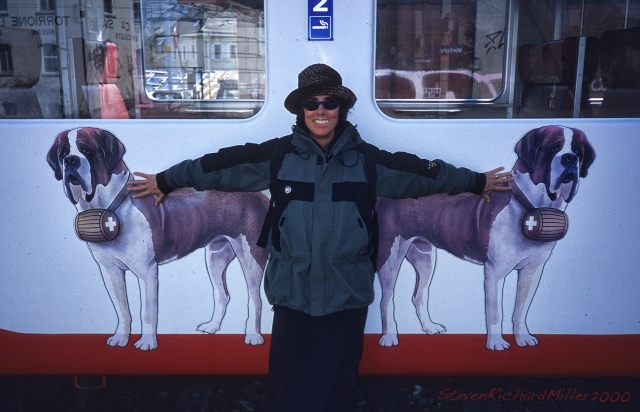 In Martigny, we switch to this train 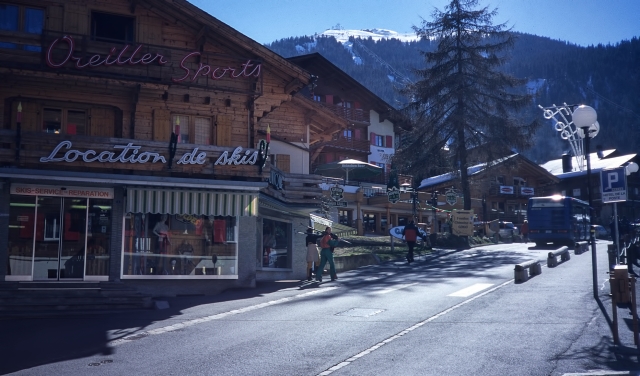 In Verbier, at the Hotel de la Poste, with Oreiller Sports across the street. The first tram can be seen rising above timberline.

In Martigny,  we connected with a train that ran directly up a side valley to Le Chable, a small town in the valley bottom. Verbier sits on a bench above the valley, and a short bus ride delivered us there. The Hotel de la Poste is located right in the center of town, and a short walk from the base terminal of the tram. We had a reasonably-priced package there that included breakfast and dinner.

Digression on raclette: Speaking of dinner, one of our dinners at the hotel was raclette, a regional cheese dish. In the classic  version, half a wheel of cheese is placed next to the fire, with the cut face exposed to the heat. As the cheese melts, a teaspoon-sized (or so) amount is scooped into a small dish and brought to the table, where you consume it with a small boiled potato and cocktail onion. Then it is washed down with an ounce of the local white wine. You continue until you are incapable of eating anymore. At the hotel, an electric heater was used to melt the cheese, but back in 1965 I had the pleasure of partaking in the classic version, at a mountain restaurant that sat at the very foot of a peak that myself and Lito Tejada-Flores (in the company of the Englishman Chris Bonnington and the Scot Tom Patey) had just climbed – the Miroir d’Argentine. End of digression.

Kathy and I presented our letters from PSIA at the ticket office, which got us a very good price on a 7-day pass, and then we went skiing! The map below shows most of the interconnected peaks, valleys and lifts. It’s a huge area. The difference in altitude between town and the high point of Mont Fort is just over 6000′. 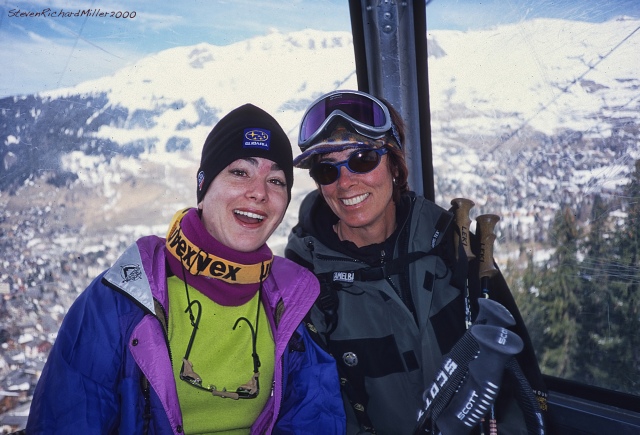 The first tram, to Ruinettes

The “Funi Space”, the second tram, to Attelas

Attelas, at the end of the second tram ride, is a junction point, with lifts and runs coming and going from all sides. From there, you can take a tram to the summit of Mt. Gele, or ski off one side to the Lac des Vaux or the other side to La Chaux. The L’Olympique restaurant is located there. 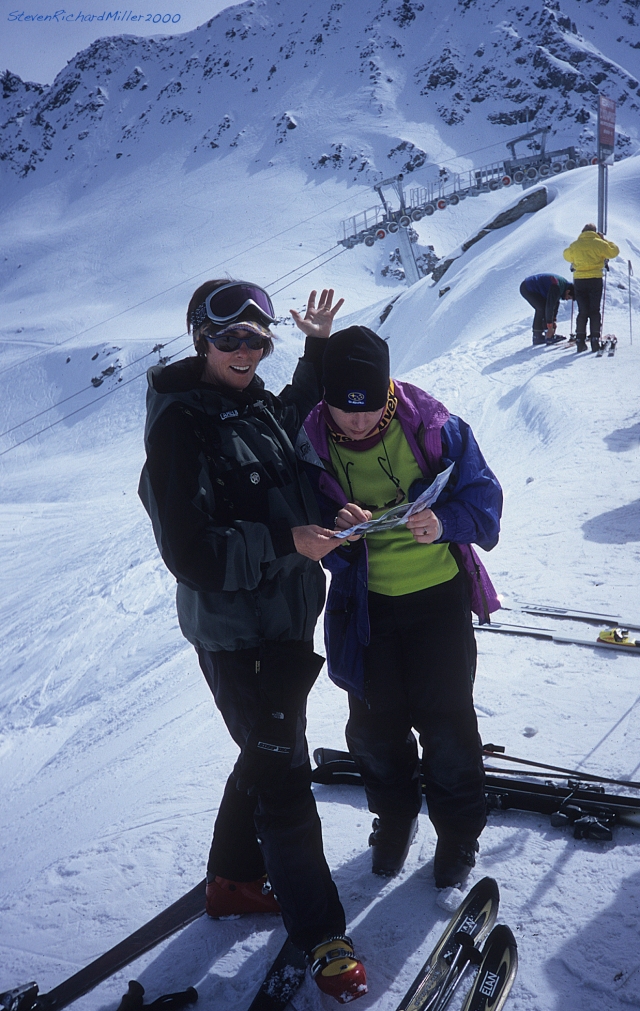 We’re at Attelas, at the end of the second tram ride, and consulting the map. Behind Kathy and Laina is the basin of Lac des Vaux, and the Lac des Vaux lift #1 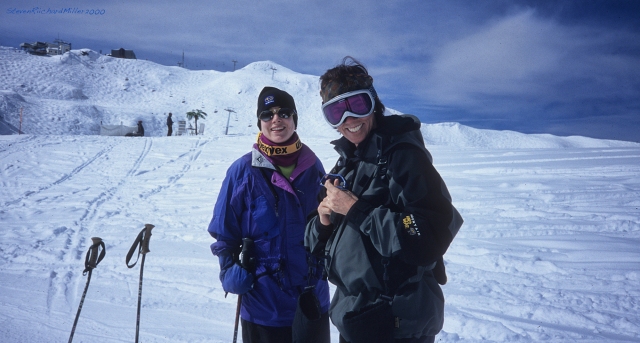 We skied down into Lac des Vaux. Attelas can be seen on the ridge beyond. Also a palm tree, that you’ll see at the end of the post.

We returned to Attelas and skied down the other side to La Chaux. The top terminal of the Mont Fort lift is identified, along with the Bec des Rosses. The latter is the venue for extreme skiing contests, which descend the face in shadow. The Cabane de Mont Fort is also identified. It’s a great lunch spot, and is used for an overnight by ski mountaineers doing the Haute Route. The farthest lift to the right is Le Jumbo, which goes to the Col des Gentianes, another (and higher) junction point.

Here, from La Chaux, is a view to the west, of the Mt. Blanc group, in France

This is Le Jumbo, which takes you from La Chaux to a big saddle called the Col des Gentianes 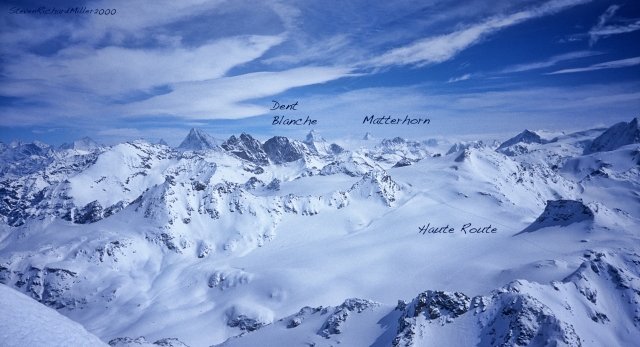 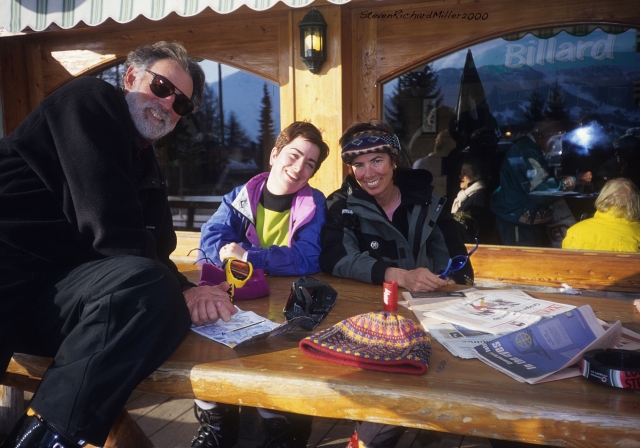 In town, at the end of the day

Base terminal of the Mt. Gele lift, at Attelas 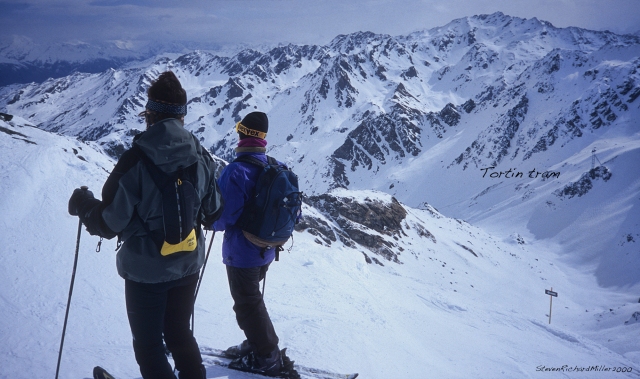 At the summit of Mt. Gele, and about to descend  the Tortin side. The Tortin tram (identified) returns you to the Col des Gentianes. 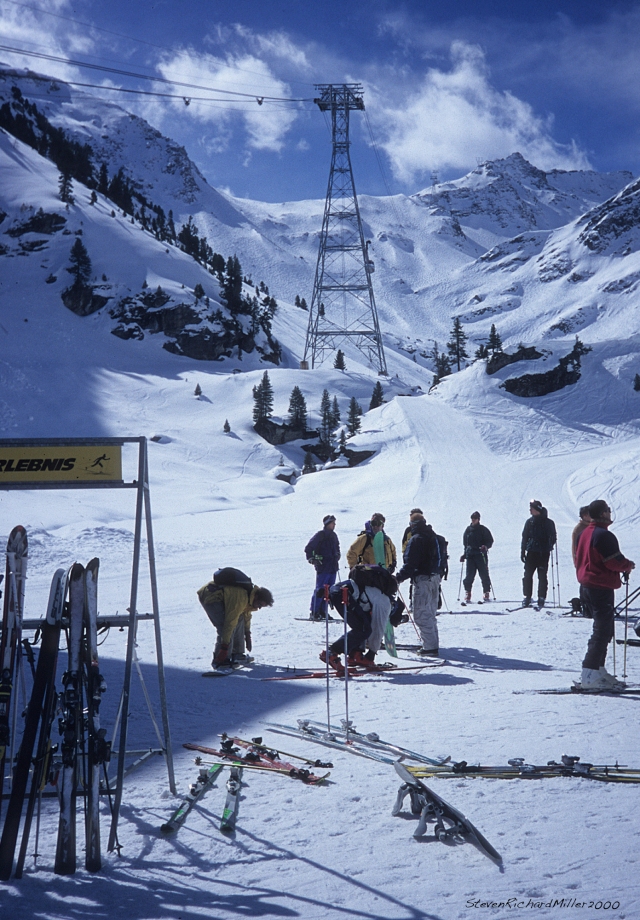 At the base of the Tortin tram. The Col des Gentianes is beyond the skyline ridge.

From the base of the Tortin tram, we descended to Siviez, and then ascended the far side of the valley to Combatseline. In this photo, up valley is to the left. Mt. Gele and the Col de Chassoure are identified. From the base of the Tortin tram, one can take a gondola up into the Chassoure basin, to the Col de Chassoure. From there, one can ski down the other side to the Lac des Vaux, re-connecting with the rest of the ski area, via Attelas. 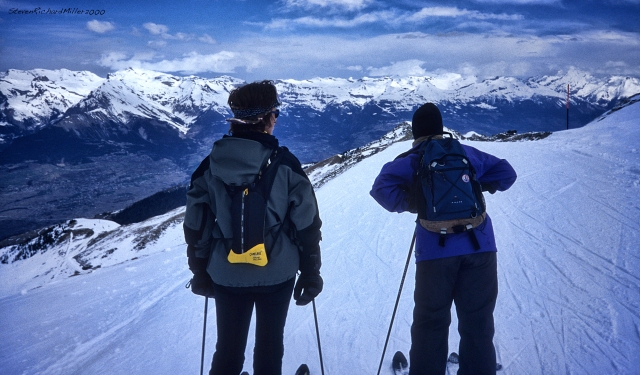 From Combatseline, the Rhone Valley and Bernese Oberland

From Siviez, we returned up valley to Tortin, rode the tram to the Col des Gentianes, and then descended into La Chaux to the Cabane de Mont Fort, for lunch.

Lunch at the Cabane de Mont Fort. We had a local fizzy white wine and a cheesy baked dish called a “croute”. Very tasty!

The days all blend in, as you ski travel around this vast area.

Back to La Chaux, on another day. This lift returns you to Attelas and L’Olympique restaurant. 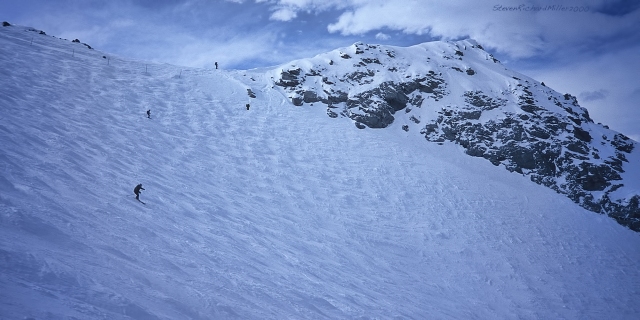 And back again to Mont Fort

Skiing the steep face below the top terminal at Mont Fort

Lower slopes of Mont Fort. At photo left is some exposed ice of the Mont Fort glacier. 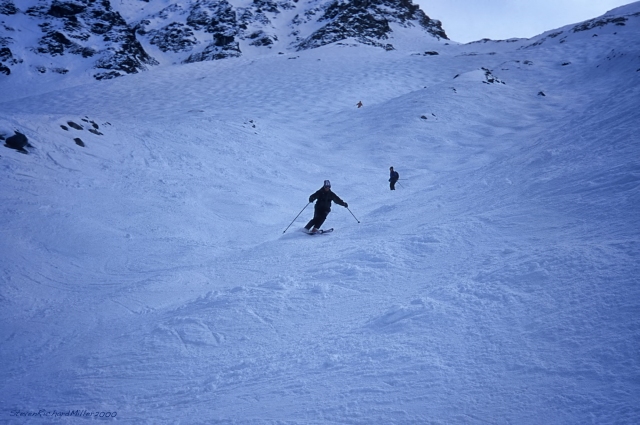 Skiing the very broad slopes of Tortin, from the Col des Gentianes

Taking a break at the base of Tortin

Riding the Chassoure gondola, up and to the right from the base of Tortin 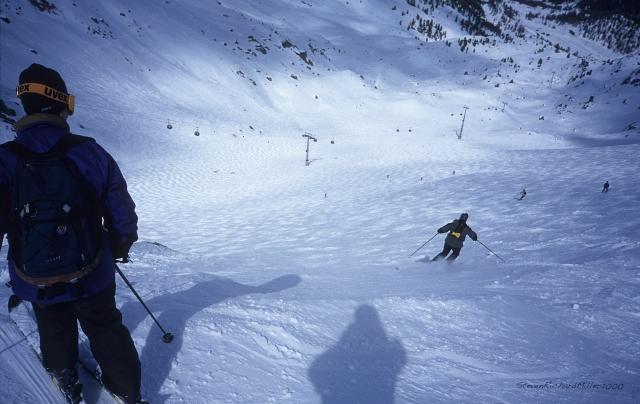 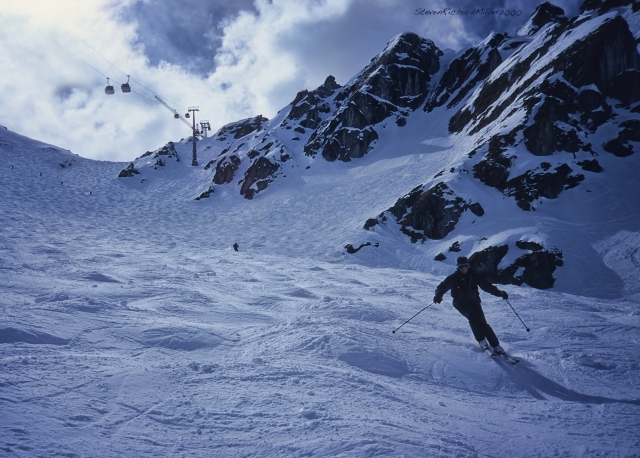 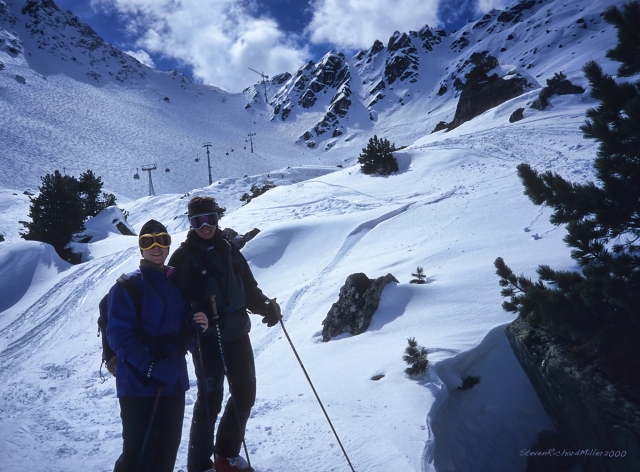 Near the bottom of Chassoure

And then it snowed!

Powder! La Chaux. The top terminal of the Mont Fort tram is seen on the far skyline.

La Chaux, with the Bernese Oberland on the other side (north) of the Rhone Valley

Looking down at the Col des Gentianes from Mont Fort. Seen between the three lift terminals is a large restaurant, with very good food, and a big deck that’s perfect for sunny days. From the Col des Gentianes, descent into La Chaux is to the left, and descent into Tortin to the right. The square shadow in the foreground is that of the top terminal of the Mont Fort tram (just above our position). On the horizon, to the northwest, are the Dents du Midi, with Martigny hidden below the clouds.

The Mont Fort tram is seen in the upper left. This vantage point is just below the Col des Gentianes, on the way to La Chaux

The slopes of Mont Fort, from the tram

Mont Fort, and yet more powder. Look, we’ve got it all to ourselves. 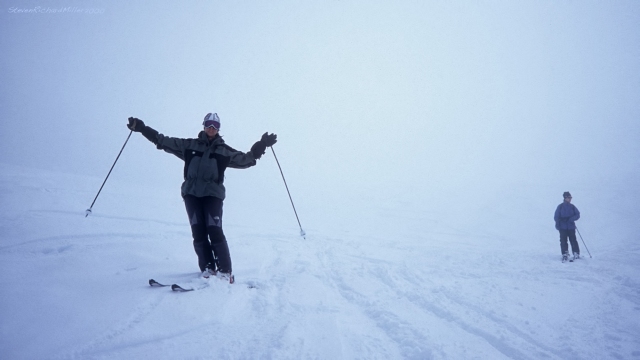 On another day, we went into Chassoure and found fog. We got vertigo and had to sit down and wait it out! 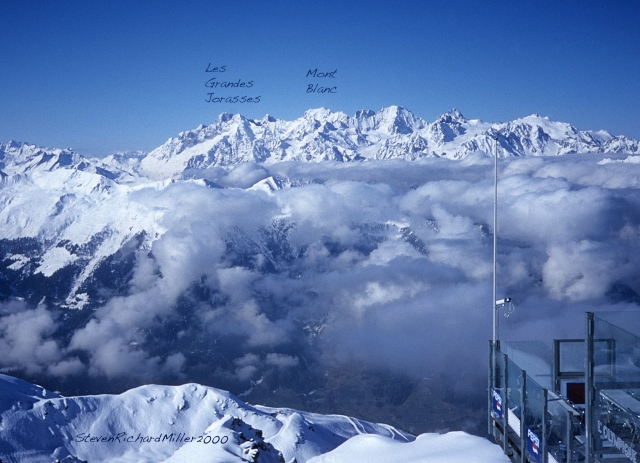 View to the west from L’Olympique, of the Mt. Blanc group

Skiing a steep slope off Mt. Gele, to the top of the Chassour gondola 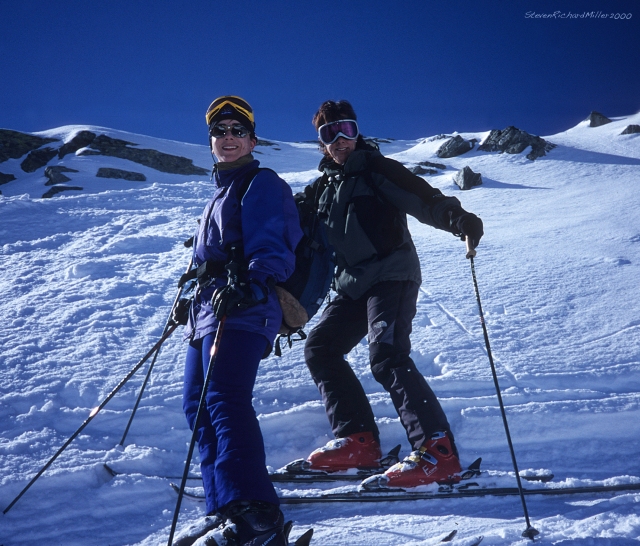 Another trip down the Tortin side of Mt Gele

From the summit of Mont Fort, skiers are seen on the Haute Route, heading out across the Glacier de Grand Desert, in the direction of Rosablanche, the low peak at the far side of the vast glaciated basin. A week after our trip to Verbier, a group of skiers on this stretch was caught in a violent windstorm, which killed them all.

On the summit of Mont Fort 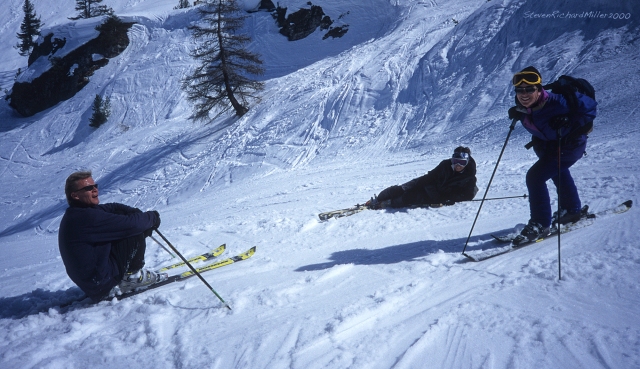 Skiing in Chassoure with Yanne, a Frenchman engaged to the daughter of the Hotel de la Poste owners.

Yanne took us to Chez Dani, off in the woods on the way back to town. There we enjoyed some “eau de vie”, which is a brandy distilled from the local William pear.

On the balcony at the hotel 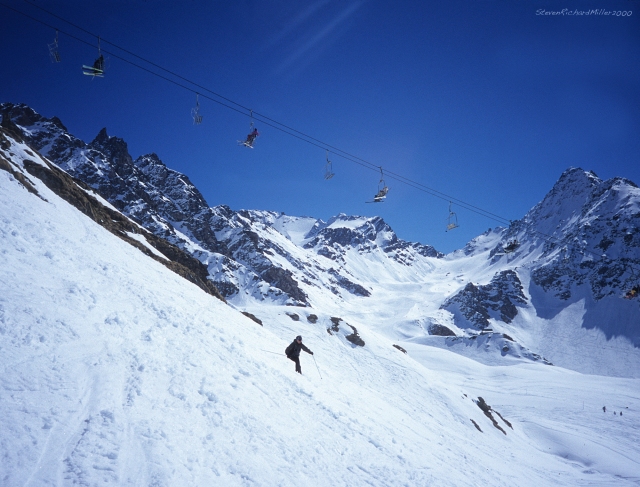 From La Chaux, view to the southwest, of the Grand Combin

Bec des Rosses, from La Chaux. The face in shadow is used for extreme skiing contests.

West-facing side of Tortin, view of Mt. Gele 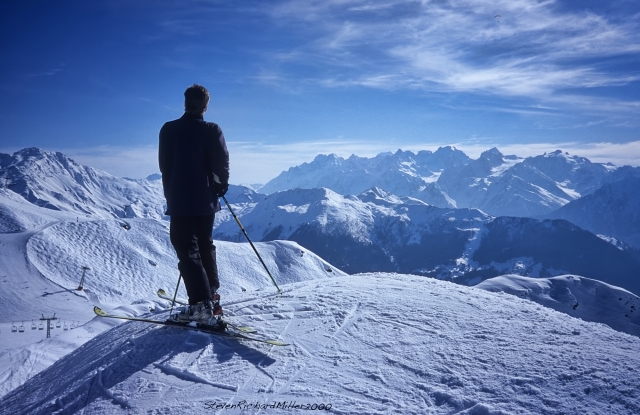 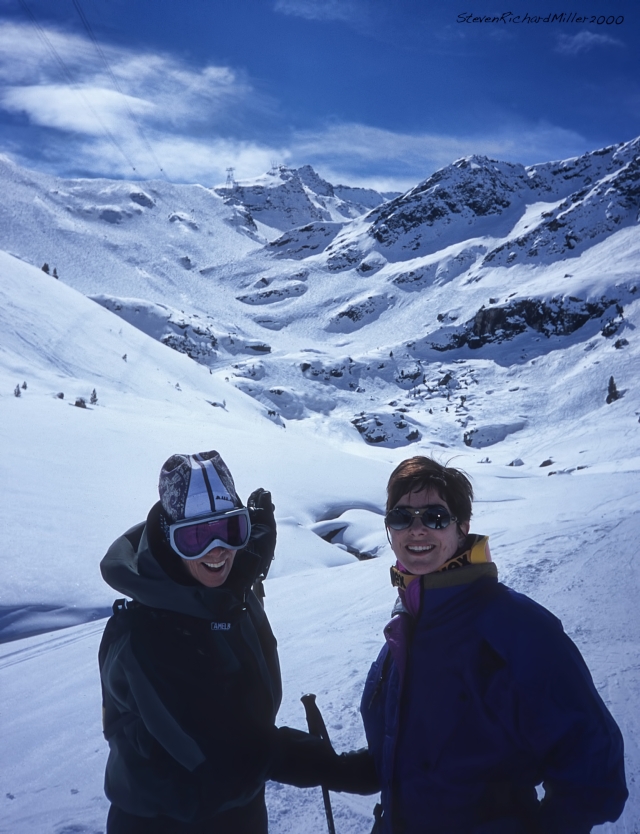 The palm tree at Lac des Vaux, with Yanne

That’s it … the high points of a week of skiing at Verbier. It’s hard to imagine it getting better than that!