In 1955, my parents, my Aunt Etta and myself  left New York City for a multi-week trip to the western National Parks and the West Coast. I was fifteen at the time. We traveled in a brand-new black Dodge, which never gave us a moment of trouble. My father could, for the rest of his life, recall every stop we made on the trip. He called himself the Pathfinder, and I inherited his talent for geographic recall.

I have just finished scanning my father’s photos from this trip, so as to complete this post. I had initially put up the post without recalling that I now had the slides in my possession. These Kodachrome transparencies have become etched by time, but still constitute what I consider to be a museum-worthy collection – the classic Western trip of the last mid-century. I have taken the liberty, with this selection, of cropping, bringing horizon lines to level, sharpening and adjusting exposure. We begin with the Corn Palace, in Mitchell, SD.

Next was the Badlands, a town called Kadoka, and, of course, Wall Drug. We stopped to fish a small lake in the Black Hills, and continued to Mt. Rushmore. We entered Wyoming, and passed through the cowboy town of Gillette, on the way to Buffalo. Buffalo was just a crossroads, with a General Store painted white with black spots to resemble a milk cow. It was on the eastern flank of the Bighorn Mountains, and surrounded by lush wet meadows. We began our climb into the mountains. Ahead of  us was a white patch on a mountain side, which I identified as snow. My Aunt Etta said it couldn’t be snow, it must be sand, since it was summertime, and “what did I, a fifteen-year old, know anyway?”. It was, of course, snow. We crossed over Powder River Pass and came to Meadowlark Lake. Fishing from the shoreline, I caught some trout, and the lake and surrounding mountain scenery was, for me, everything I had imagined it would be. “This is it, this is the real thing!”, I said to myself. It was the mountain West, and I was thrilled!

Meadowlark Lake. Me and trout

We then descended through the rocky slopes of Ten Sleep Canyon, on the western side of the range. This descent, the first of its kind on the trip, scared my Mom and Aunt Etta.

Driving north from Wyoming into Montana, our first big destination was Glacier National Park, situated along the Canadian border, in the far north of the state. 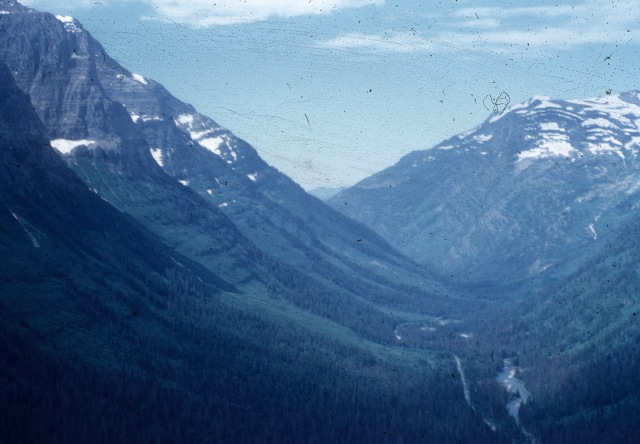 View of the McDonald Valley, from the Going to the Sun Highway, Glacier NP

Many Glaciers Hotel and Swiftcurrent Lake

We stayed at the Many Glaciers Hotel, and my Dad and I rented a rowboat on Swiftcurrent Lake, to go fishing. He hooked a big one, but lost it right at the boat. I got a close look at it, as it came up, jumped and arced back into the water. It was a huge rainbow, broader than the boat’s oar, with a wide bright-red stripe down its side.

Swiftcurrent Lake. Dad and me

We left Glacier, passing Hungry Horse Dam on our way south to Yellowstone.

At Yellowstone, we stayed at Lake Lodge, probably in a cabin. Not far from the Lodge is the Fishing Bridge, which spans the Yellowstone River at the outlet of Yellowstone Lake. It was quite a scene.

And people were catching fish – hefty and colorful Yellowstone cutthroats.

Digression on the Yellowstone cutthroat: The stretch of river spanned by the bridge happened to be the spawning grounds for the cutthroats that lived in the lake, and this fact ultimately led to the closure of the Fishing Bridge to fishing. Outdated NPS literature points out that, after the closure, one could still watch the trout from the bridge. This is from the NPS website:  “Overfishing for cutthroat trout here contributed to their decline in the lake. The trout also spawn here. For these reasons, fishing is prohibited from the bridge. It’s still a good place to watch trout.”. I say “outdated” (above) because you can no longer even watch trout from the bridge, and this is why – beginning in the last half of the 1990s, the Yellowstone cutthroat began to disappear from Yellowstone Lake and river. Why? Well, sometime around 1995, lake trout were illegally introduced into the lake by a party or parties unknown. Lake trout are the top predators in lakes where they have been stocked, and the introduced lake trout ended up eating the better part of the Yellowstone cutthroats in the lake! The NPS is now engaged in an effort to reverse that loss, by systematically netting and killing lake trout. We’ll see what happens. In any event, when Kathy and I last visited Yellowstone, in 2010, there wasn’t a soul to be seen on the bridge; nor did we see any fish. And we fished the lake from the shore, with no luck. Here’s the last Yellowstone cutthroat I caught in Yellowstone Lake, in 1994.

And here’s one of the last Yellowstone cutthroats I caught in the Yellowstone River, also in 1994.

Just downstream of the Fishing Bridge was a rowboat livery, and my Dad and I went out to try our luck.

My Dad and myself, Yellowstone River, 1955 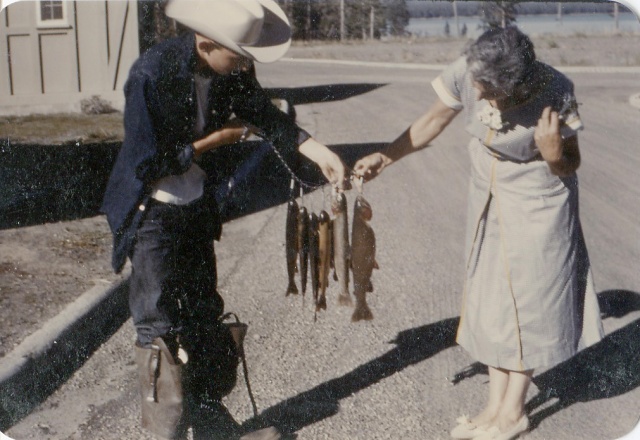 Pretty good fishing, huh? I don’t recall our tackle or bait – probably worms. The Lodge was required to cook the fish caught by guests at a nominal cost. I remember the dinner. It was very tasty. And then, of course, there were the other attractions of Yellowstone. What an extraordinary place! Over the years, first myself, and then Kathy and myself, have spent a lot of time in Yellowstone. 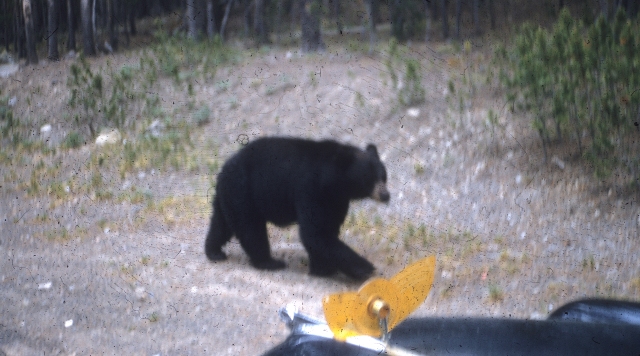 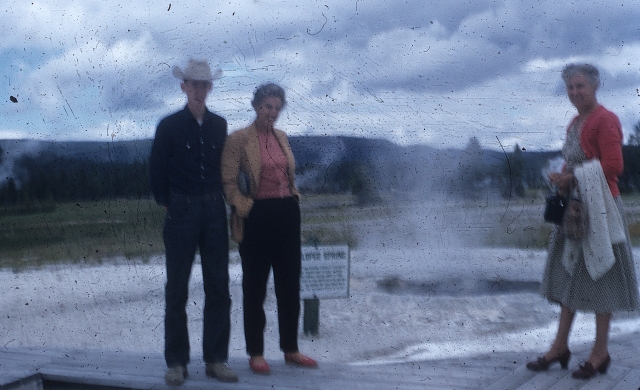 Geyser basin. Me, Mom and Etta.

We next drove a short distance to the south, to see the Tetons. It was another “WOW!” experience, and I’ve since stood on many Teton summits. 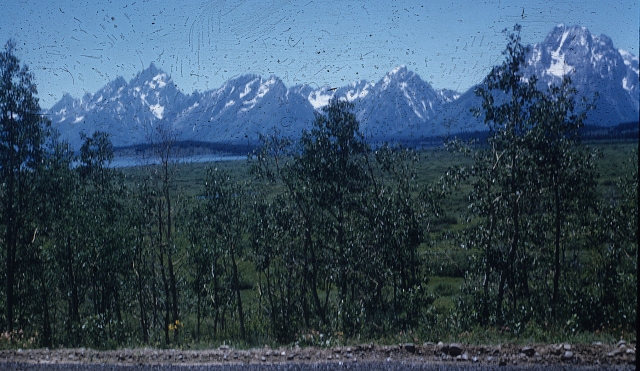 The Tetons, with Mt. Moran on the right and the Cathedral Group on the left

The Tetons. Mts. Teewinot (left) and Owen (right). The Grand Teton is hidden from view, with Jenny Lake in the foreground.

From the Tetons, we headed west to the Columbia River and Crater Lake.

Bonneville Dam, on the Columbia River 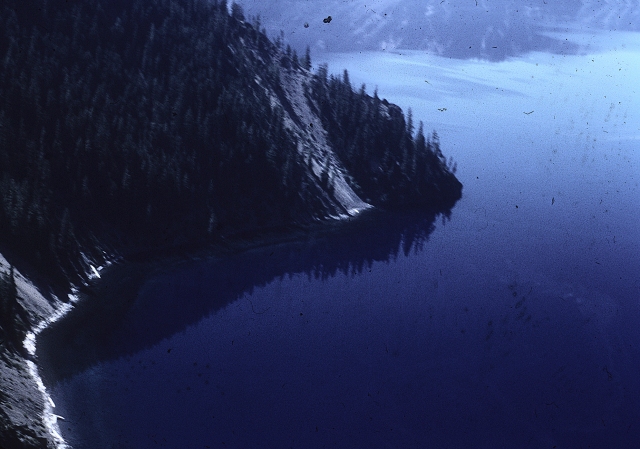 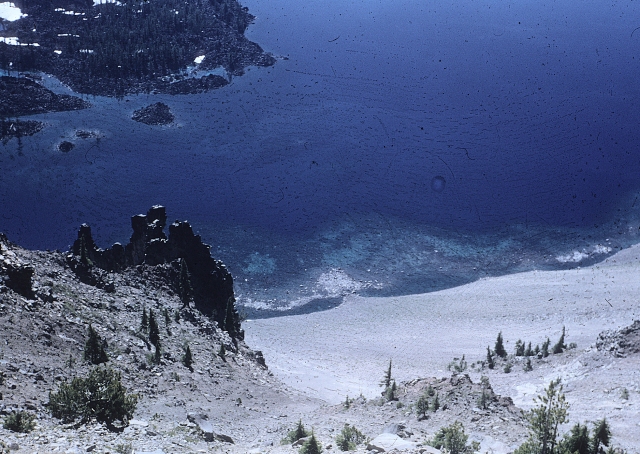 From Crater Lake, we drove south, to Lassen NP, in California.

Mt. Lassen and Lake Helen. Etta, me and Mom.

I returned to Lassen in May of 1959, to work for the summer at the Manzanita Lake Lodge. 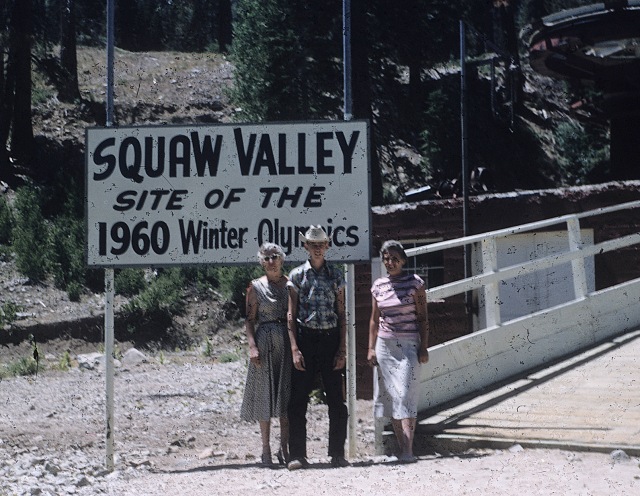 Squaw Valley, before the Olympics

My Mom and Aunt Etta were too scared to remain in the car when Dad decided to drive down one the steepest streets in San Francisco. Then it was on to Yosemite!

From the Valley, we watched the Firefall. Sorry, but they don’t do that anymore. 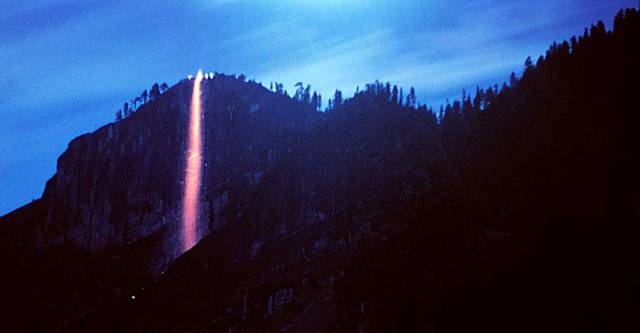 The last time I saw the Firefall was when I was bivouaced at the top of the Ahwahnee Buttress (straight across the Valley from the Firefall), after climbing it with Mike Borghoff, in 1964

Yosemite Falls. On the right is Yosemite Point Buttress, which I climbed in the early 60s with David Hiser. 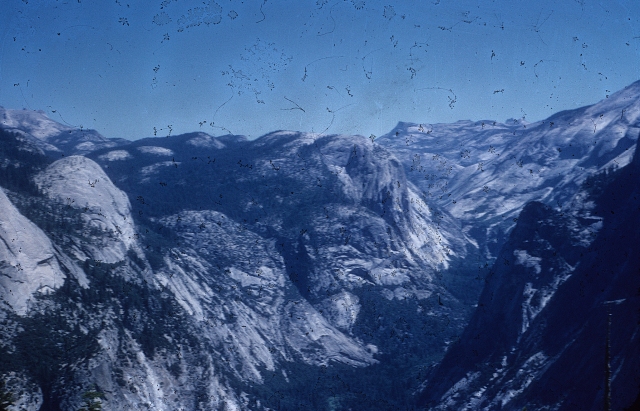 Sequoia, Yosemite. Me (who clearly didn’t want to hold hands), Mom and Etta 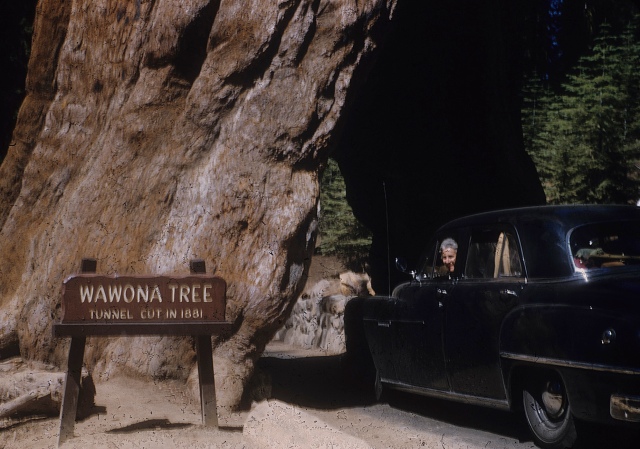 Wawona Tree. Me and Mom 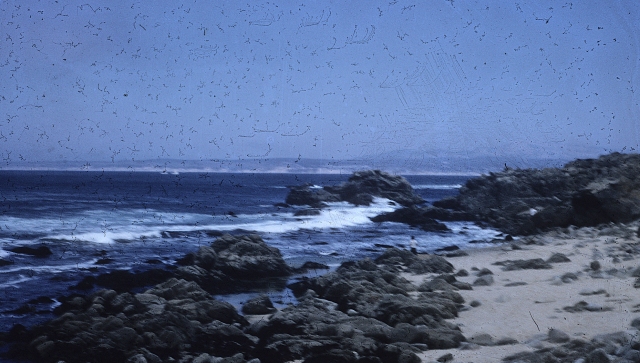 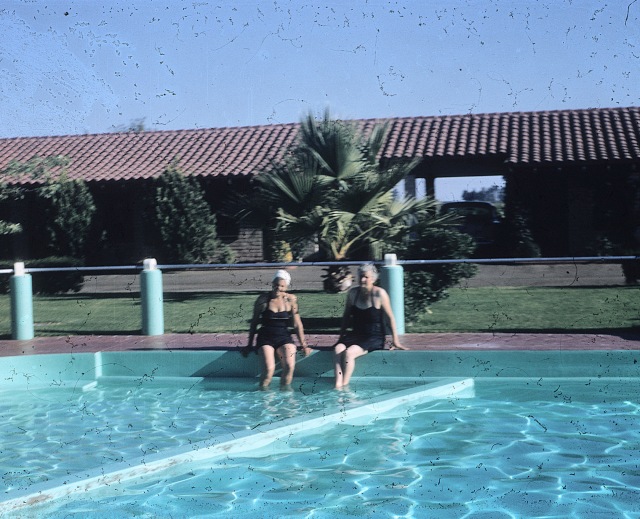 The smog in LA was so bad that it made your eyes burn. It was yellow. I recall we visited the La Brea tarpits, while there. And … it was now time to head east, but there were still plenty of sights to be seen, on the way. Of course, we had to hit Las Vegas. A distant relative who lived there demonstrated to us how you slip the maitre d’ a twenty to get a good seat for the show.

After Las Vegas, our next stop was the North Rim of the Grand Canyon, where we stayed at the Grand Canyon Lodge. At a dance in the evening, I met Dorothy R., a young lady from Utah. After a while, we left the dance and followed a trail that led towards the rim. It was a full moon. As we approached the overlook, we could see the lights from the South Rim, 10 miles away. The trail ended at a curved railing, with the Canyon dropping away into inky blackness on all sides. Without a word, we turned to each other and kissed. It was the first open-mouth kiss of my life! 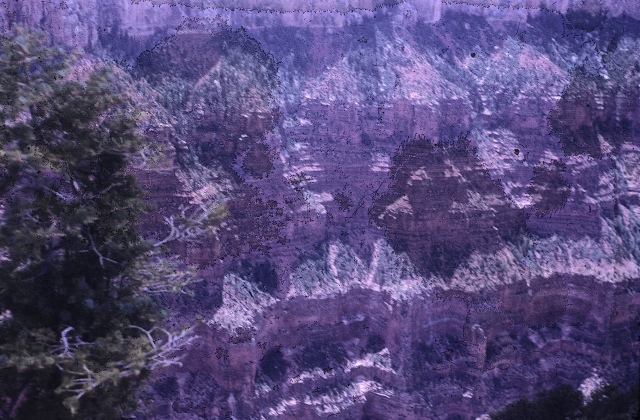 The trail to Bright Angel Point, on the North Rim, 2010

We left early the next morning. Deer stood chest-high in the mist that filled the meadows, while only the heads of the wild turkeys stood out. Subsequently, I have spent (before, and then with Kathy) the equivalent of years in the Grand Canyon – both on foot and rafting the Colorado River.

We then drove north to Bryce Canyon NP. 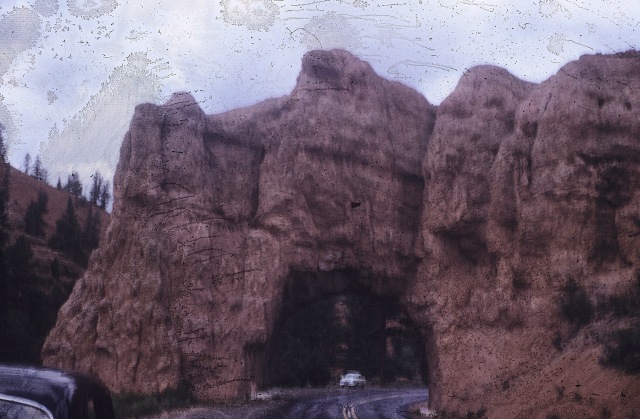 And then east to Colorado. 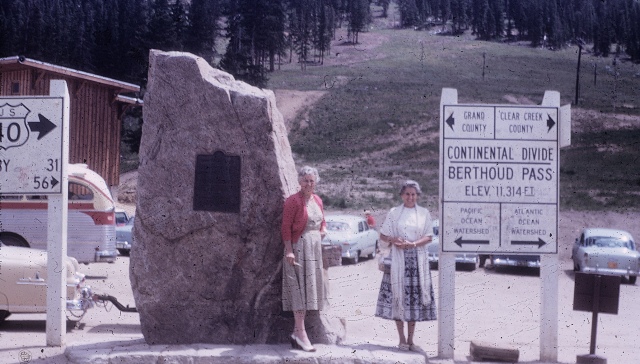 Berthoud Pass, on Rt. 40, where I later (1960) skied, while working at the nearby resort of Winter Park

My maternal grandfather, Morris Schwartz, was a union printer at the New York Times. I believe it was the case that he asked that we visit the Union Printers Home, in Colorado Springs, which we did.

Garden of the Gods 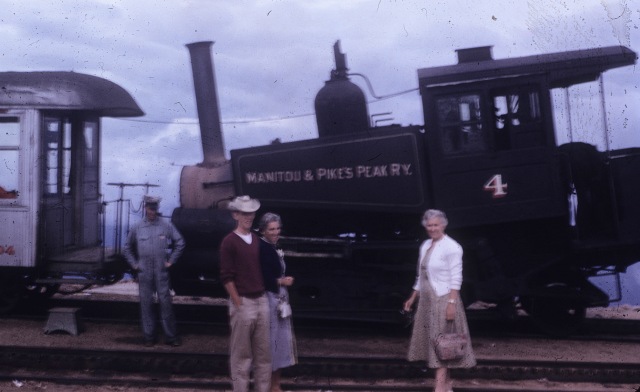 In Manitou Springs, my folks bought me a pink striped cowboy shirt, with pearl buttons. I wore that shirt for years!

We headed home from Colorado Springs. Need I state that this trip was to have a great influence on me? I knew that I must return to the West at the first opportunity. I don’t remember anything of my next, my sixteenth, summer, but the following summer saw me back at Glacier Park, working at the Glacier Park Lodge, in East Glacier.

Being seventeen (and not eighteen), I had to lie about my age to get the job. But I could wait no longer – I had to get back to the West! As it indeed turned out, our trip “Out West” propelled me in a direction that I rarely, ever after, veered from –  to live in the Mountain West and make my living in the outdoors. Thanks, and thanks again, Mom and Dad!