I had heard of this wonderful river – the largest in Central America – that ran through the tropical rainforest between Mexico and Guatemala. One attraction was that it had Mayan ruins that were difficult or impossible to otherwise visit! A group of us from Santa Fe decided to run it, and left the snow behind for points south.

We arranged to travel to Mexico City with the Santa Fe Bridge Club, which was going there for a bridge tournament. The trip was under the leadership of Jim Dunlap, who ran a Mexican bookstore in Santa Fe. Jim was a Mexican tour guide extraordinaire, and had chartered a club car for the train trip. During the stop in Monterrey, Jim managed to purchase more steak for the group. How he did that we could not imagine. We parted company in Mexico City and got on a third class train to Palenque, which was at the complete other end of the spectrum from the club car. The Mexican passengers bought raw pulque through the train windows at the many stops, and the train got dirtier as we went, with the toilets overflowing down the aisle of the car. With very great relief we got off the train at Palenque and rented hotel rooms. One room had a large tiled shower/toilet, which came in very handy, when we returned from our first meal in town and shortly began to experience simultaneous explosive diarrhea and vomiting. Aah, the third world …

We first visited Agua Azul, a gorgeous limestone river somewhat resembling Havasu Creek in the Grand Canyon. Then we visited the ruins at Palenque, and there picked up a guide, Victor. One our party, J.R., had more money than the rest of us, and decided to hire Victor for the river trip, after Victor had said that he “knew” the river (which was, of course, not true). We couldn’t afford to hire a truck for the long trip to the riverside, so we started out first by bus, and then began hitch-hiking. We got picked-up by a truck carrying a load of cement, which took us to Crucero Bonampak (Bonampak junction). We got there at night and caught a few hours sleep until a doble-traction (4-wheel drive) truck picked us up and drove us the remainder of the way to Frontera Echeverria, at the river. We bivouaced until dawn, when we were awakened by the howler monkeys. The driver had dropped us off short of the river and we then had to carry all of our stuff about a mile to the actual riverbanks.

We named our boat, a Udisco, after Victor and I wrote that name on the boat with a felt-tip pen. Then we loaded up and pushed off. Our first stop was on the Guatemala side of the river, because J.R. wanted to see if he could find some bottled water at a house that sat atop the high bank. Bottled water was, of course,  not available, but we bought some armadillo burritos for lunch, and got tepescuintle to go. Tepescuintle is the Mayan name for a rodent called a paca.

We arrived at the ruins of Yaxchilan for that night’s camp, and had spaghetti with tepescuintle. The ruins were spectacular. We camped the next night on a sandbar and suddenly heard a loud roaring. It was a hard rain hitting the jungle foliage. Next, we camped upstream of the Budzhila waterfall, and later realized that we had gotten poison ivy while exploring around the falls. We came on our first whitewater, a big rapid whose actual size was hard to judge from upstream. It knocked us around, but we stayed upright. Then we entered the canyon stretch of the river.  In one of the canyons, where the river narrowed considerably, we encountered large whirlpools that grabbed us and spun us around. The canyons continued most of the way to the end of the trip, at Boca del Cerro, near Tenosique. From Tenosique, we took a bus to Veracruz and flew from there to Mexico City. In Mexico City we slept the night on the marble floor of the terminal and then flew to Juarez, where it was snowing as we de-planed. 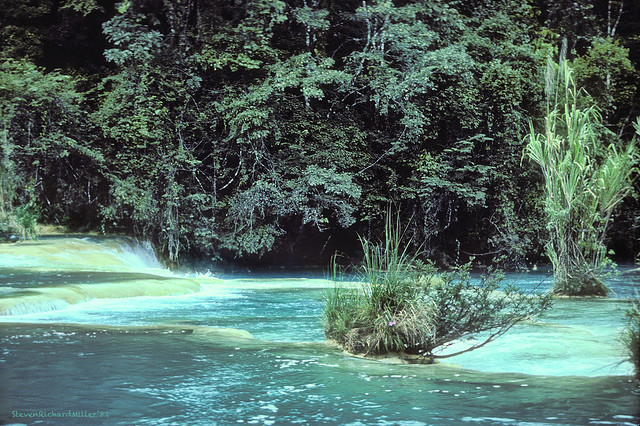