“Camps” #18 and #19 were the two nights spent at the Hotel Villa Madrid in Celendin, which is a thoroughly pleasant  town. On the Plaza were an ATM, a pharmacy and a cafe (“El Rincon del Gato”) that sold good coffee (coffee concentrate mixed with hot water) and blended fruit drinks. What else could you ask for?

The Plaza and a mototaxi 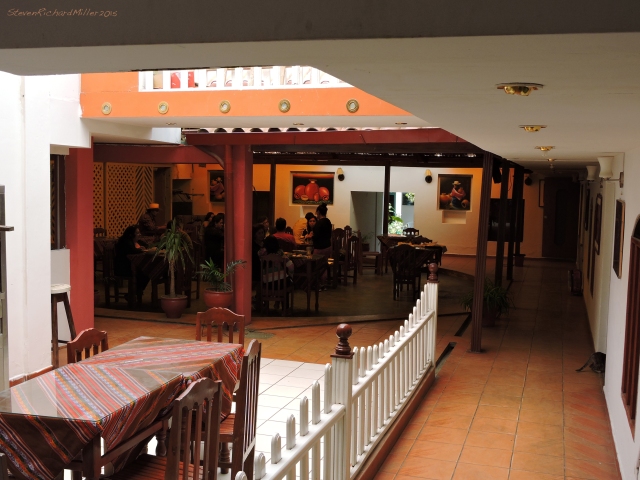 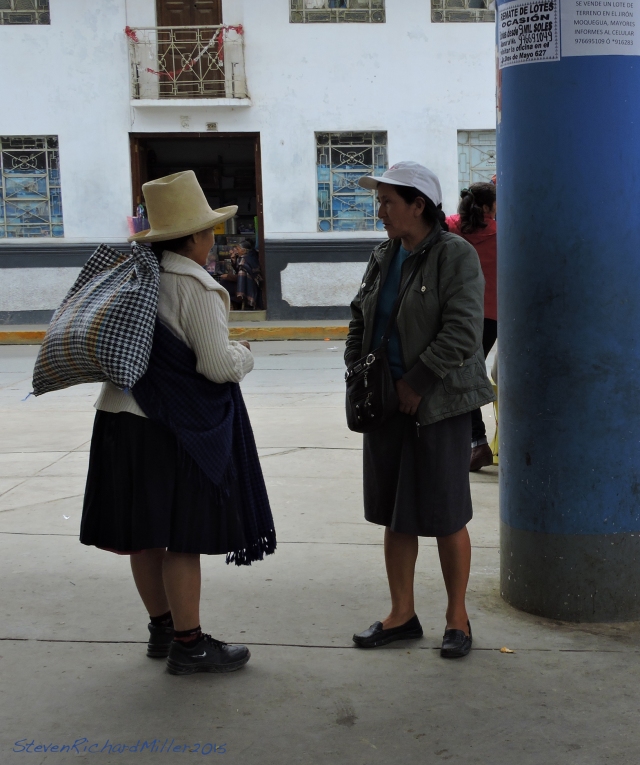 Women at the Mercado 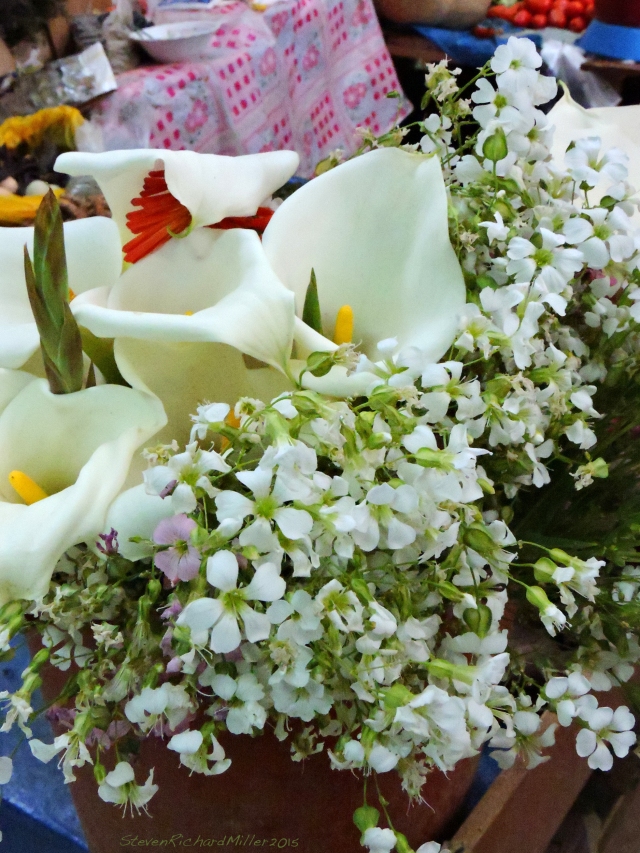 Flowers for sale in the Mercado 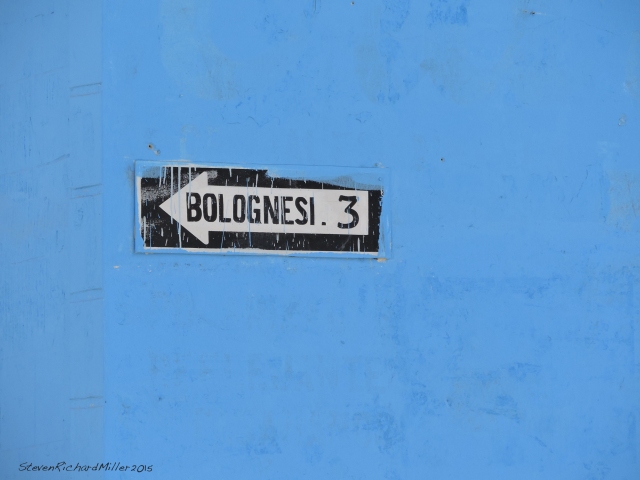 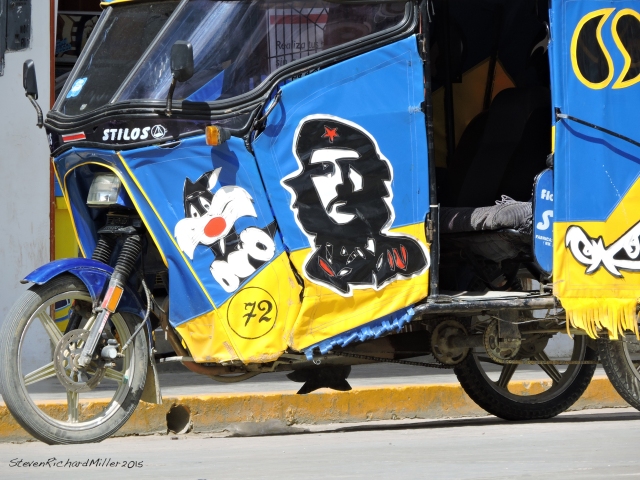 We returned to the river and were packing the resupply items into the boats, when Barba got a call from Pedro, who was still gone. Pedro had been obliged to go to Cajamarca to pick up the replacement raft – but guess what!?!  A kayak, not a raft, had been sent from Trujillo! I found this news to be very disconcerting. We had had two rafts destroyed so far, and not for lack of talent on the part of those rowing them. The floor of the raft that Kathy and I were using was failing, and we were obliged to run it soft. We would, in any case, send CJ’s raft back, which would leave us with three rafts. If another raft were to be disabled or destroyed we would be in a fix. On the spot, I declared that I was ready to quit. I took the phone and told Pedro that. “What if we lose another boat?”, I said to him. “Well, we’ll deal with that if and when it happens”, he replied. In any event, since Kathy, CJ and Britt wished to continue, I backed down. Pedro had given us a talk at the beginning of the trip, in which he had stated that, when circumstances were not to our liking, his response would be: “It is what it is”. And so it was. We then started to figure out how to lighten the loads, which included getting rid of one large cooler, extra food, some back-up gear and more. We set off without Pedro in mid-afternoon, with CJ rowing the cataraft. He would follow in his kayak. 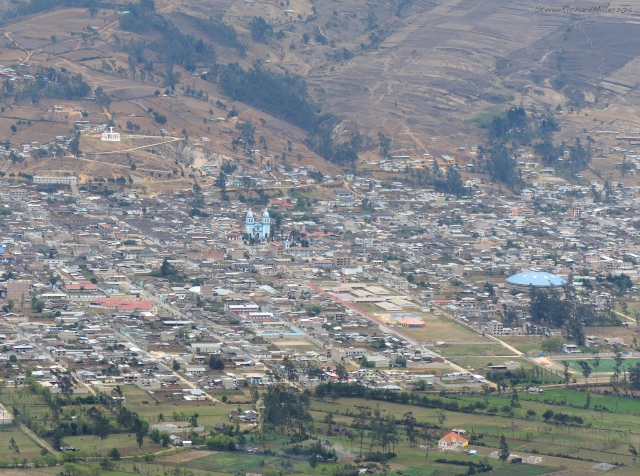 View of Celendin, as we leave on Day 20 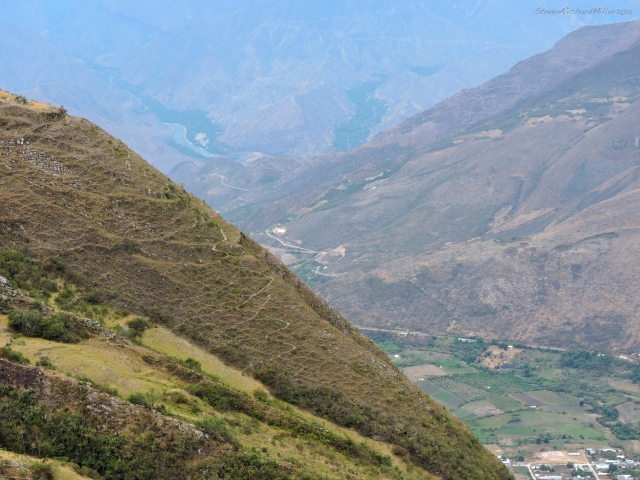 View to the river

View upstream and the highlands across the canyon

View downstream and the highlands across the river

Chacanto was not a particularly attractive town

Lunch in Chacanto. Left to right: Kym, Artie and Nate

The three that had gone to Leimebamba – Kym, Artie and Nate – had enjoyed that town and the ruins at Kuelap. Nate had seen a Sword-billed hummingbird at a feeder at the KentiKafé in Leimebamba, which café receives a glowing review in the Lonely Planet guidebook. It was a town that I had hoped to visit, but we never made it. 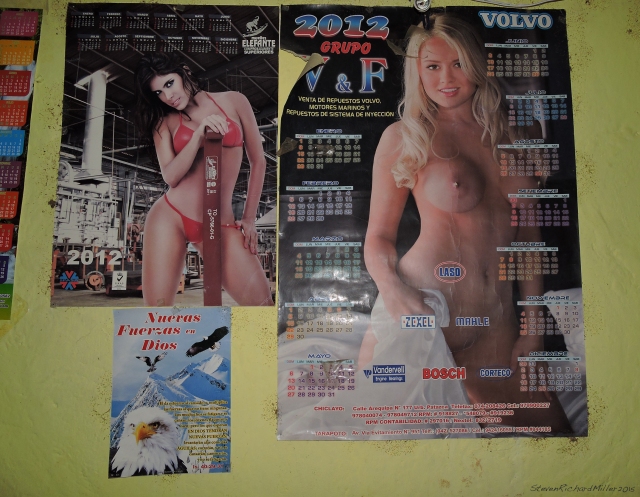 Calendars in the restaurant

Balsas Rapid (III), from the bridge

Barba and a swimmer, in Balsas (just downstream from Chacanto). It was Sunday, and lots of people were down by the river.

Folks relaxing in a boat, in Balsas. Moments after I took this photo, everyone in the boat pulled out their cell phones and photographed us.