We camped upstream of the Yesojirca Narrows on the first night of our trip (not counting our camp the night before at the gravel pit). It had rained that night and was still raining and cool in the morning.

Kathy is at the oars as we prepare to leave Camp #1. It was chilly and we were all bundled up.

We had been told about the considerable excitement that the Narrows had provided on the preceding trip, where the first boat had failed to stop and scout the rapid. That boat had bridged (got stuck sideways between the opposing rock walls of the Narrows), causing two of the following boats to flip as they ran into and got stopped by that bridged boat.

We ran a Class III rapid, Villao, before arriving at the Narrows scout.

Pedro stands by with a throw rope, to ensure that all boats make the eddy, and not run the Narrows without first scouting it. It continued to rain, hence the water spots on the lens in the following shots. Then it’s our turn to enter the Narrows. 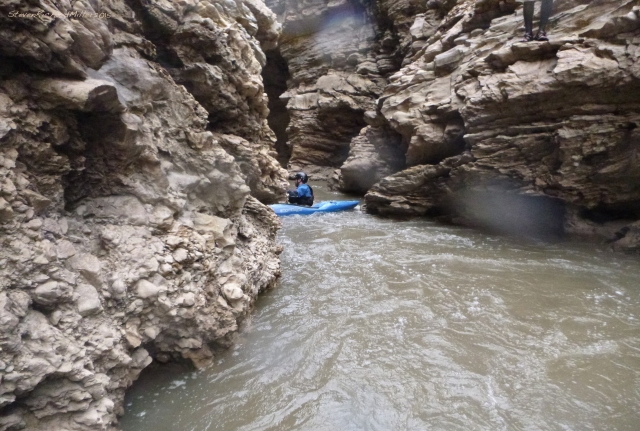 We eddy-out above the most constricted part of the Narrows, where Nate tells us that the cataraft had been cut while maneuvering through that spot. Nate is seen, with rock in hand, hammering away at the offending spur of rock. 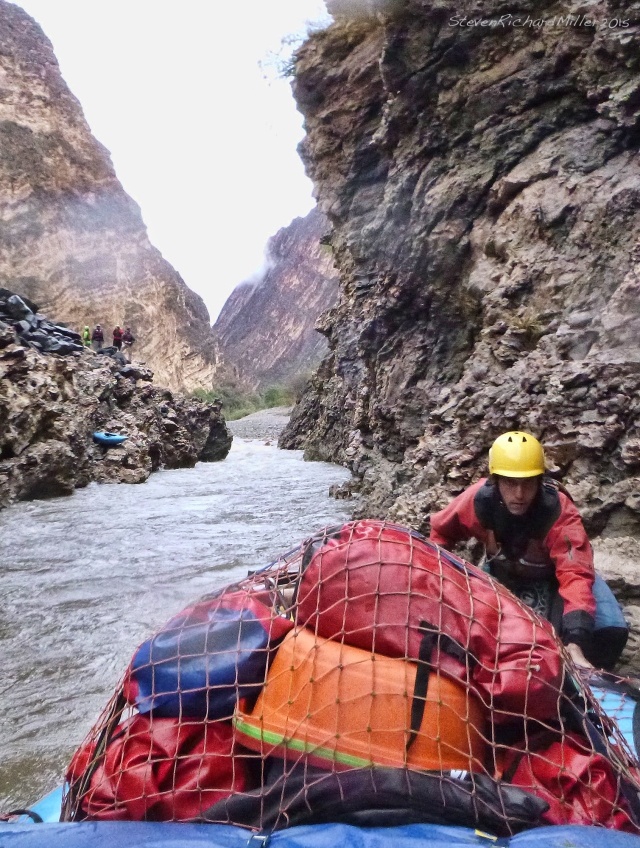 Barba helps us get through the constriction 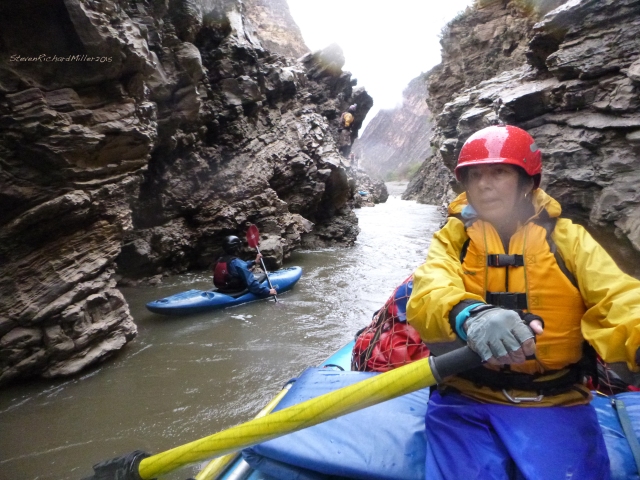 We’ve passed through the constriction, and look back upstream

CJ enters the Narrows, in fast current … (Kathy Miller, this and following 3 photos)

and bounces off the left-hand wall. 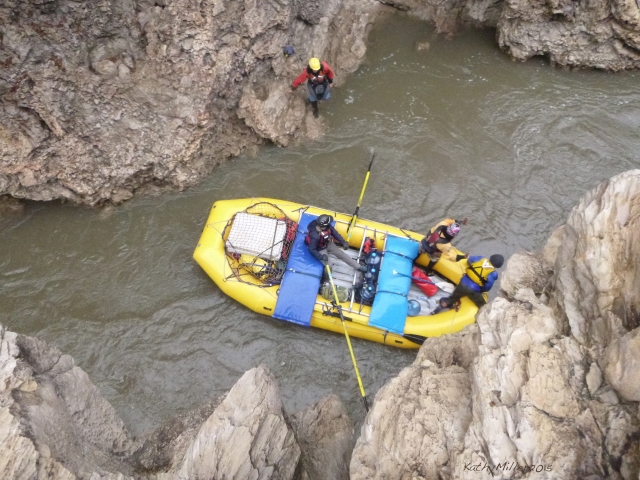 With Barba to her side, and Pedro and Zacarias up front, CJ starts into the very constricted part of the Narrows.

Fortunately, there is little current at the constriction, allowing for a very careful easing of the boat between the sharp limestone rocks 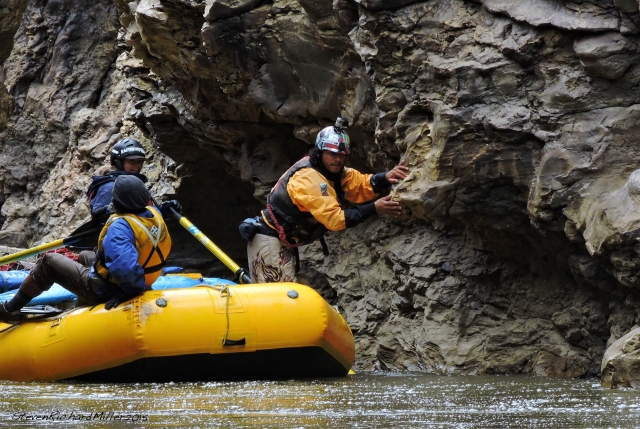 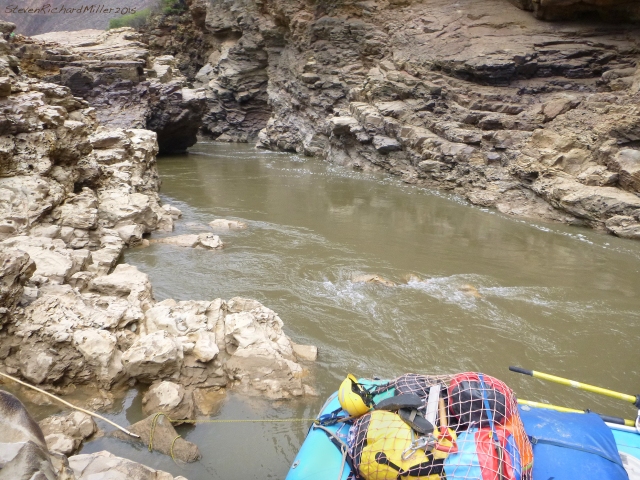 Upstream view to the exit of the Narrows

Fluted rock at the exit of the Narrows. The cataraft was repaired here, and during that time, we saw a pair of Andean condors circle above. 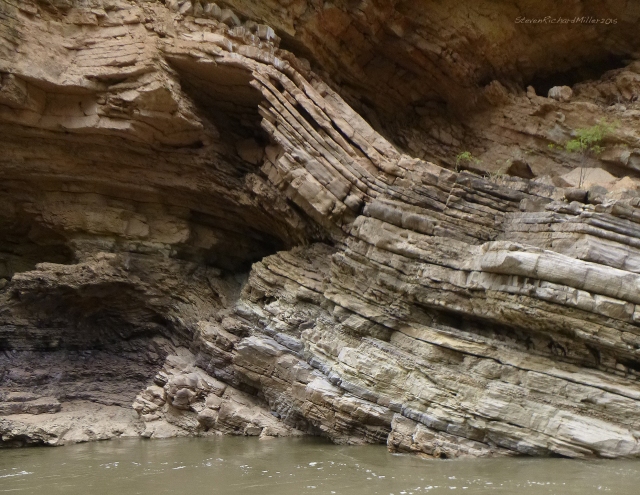 Folded limestone strata at the exit to the Narrows 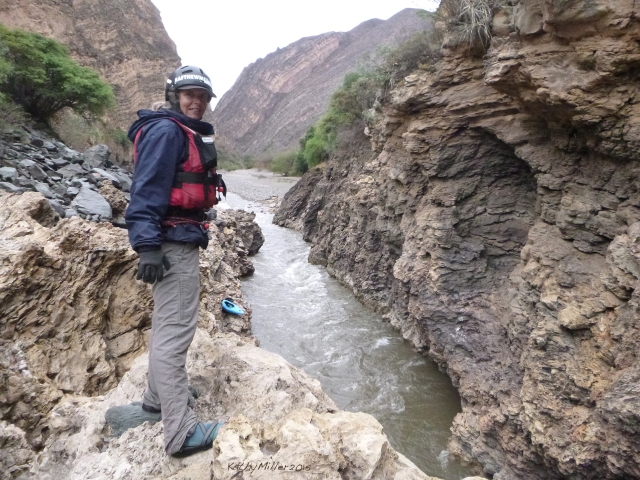 CJ, atop the Yesojirca Narrows

Like rivers elsewhere, trash is found along the banks of the Rio Marañon, and much of it consists of plastic bottles and containers. While many of us, in the United States, make sure that our trash gets to the dump, this isn’t happening to the same extent (or at all) along the Rio Marañon and its tributaries, where trash is often dumped down a bank and into the river, for lack of a better disposal method. In our first week or two on the river, every riverside bush and tree was festooned with scraps of plastic that had been caught-up on their thorns and branches. This trash load, which had been deposited into the river by the upstream riverside villages, lessened as it was strained-out and as we floated downstream into a less-populated canyon. 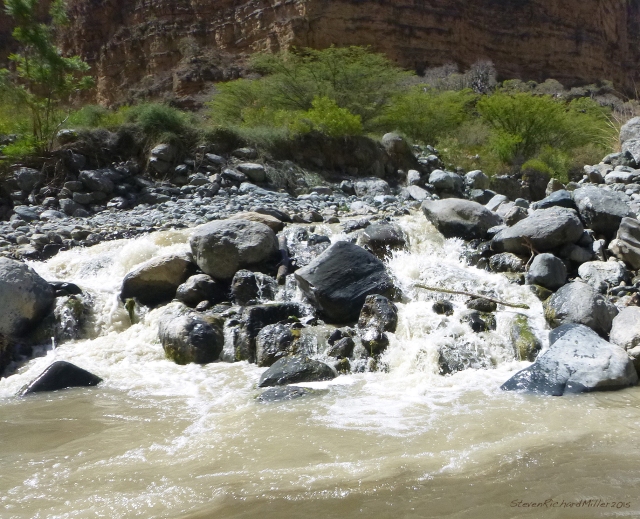 Entering on the right, one of the many creeks and rivers tributary to the Rio Marañon 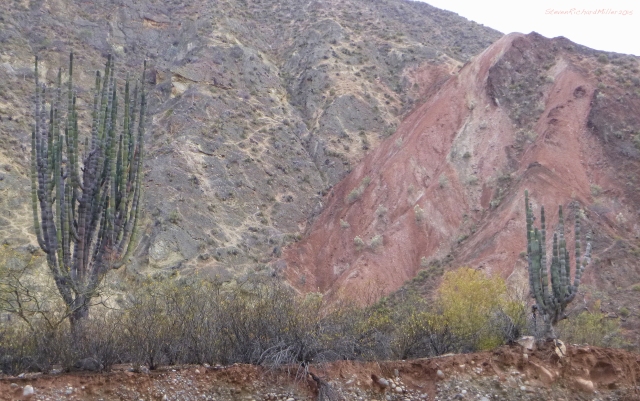 Cacti and a colorful hillside

An extreme fold of the rock strata

Villages were often located on or close to ridge tops, far above the canyon bottom, where springs and spring-fed creeks were to be found. Eucalyptus trees, an import from Australia, marked every village. Dry farming  of corn took place on the steep hillsides. Many of the villages were reached from the plateaus and ridges above by rough dirt roads, and most had electricity and cell phone transmitters. At night, we would see the village lights twinkling far off and high above.

A raft and fishing net

Movie of the confluence of the Rio Yanomayo, a good-sized stream which descends directly off of the Cordillera Blanca: