After spending the winter of 1961-2 ski-bumming in Stowe, Vermont, I returned home to New York with the intention of traveling to Europe, where I would spend the summer climbing in the Alps with David Hiser, afterward to travel south and east. At the passport office in Manhattan, I noticed some folks walking down the hall towards me, conspicuously arrayed in puffy light-blue down jackets. These unmistakeable items of apparel were Lionel Terray “duvets”, one of the few makes of down jacket then available to climbers in the US. 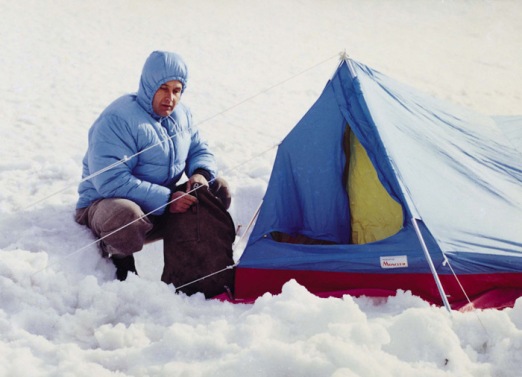 Lionel Terray, in his down jacket, Alaska, 1964 (Moncler photo)

Sure enough, they were some California climbers of my acquaintance. As it turned out, we were all taking the same Yugoslavian freighter to Tangiers, Morocco – the S/S Srbija. This was the line used by Jack Kerouac and other beats to get to Morocco, where they could hang out and smoke all the dope they wanted. 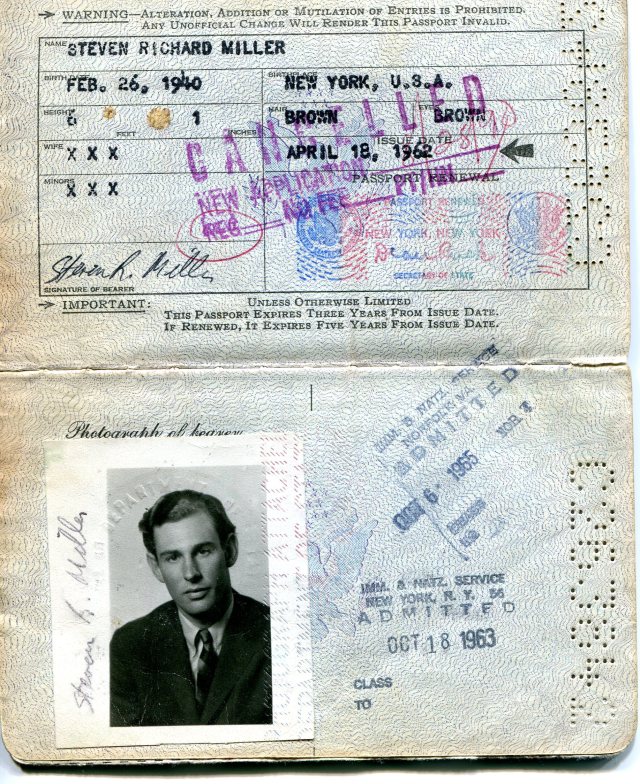 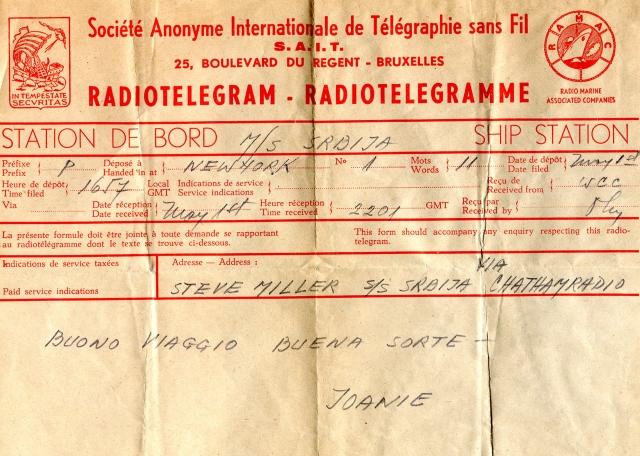 A cable from a friend arrived as we steamed away from New York, May 1, 1962

We had a good time on the crossing, watching for dolphins and drinking slivovitz. We smoked hash in Tangiers, and then I went on to Ceuta, in Spanish Morocco, to catch a ferry to Spain. 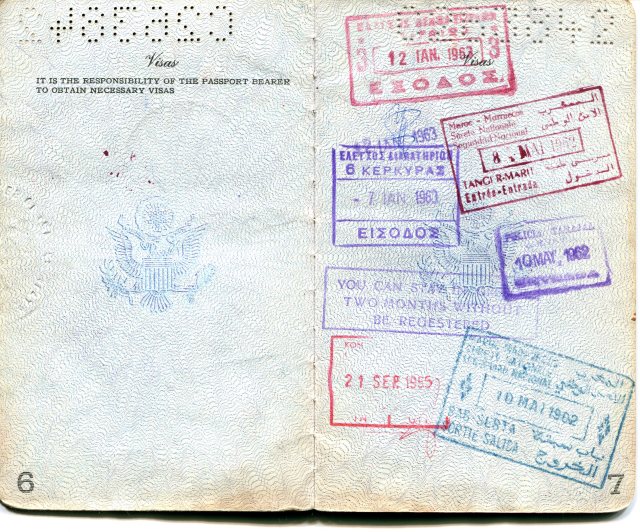 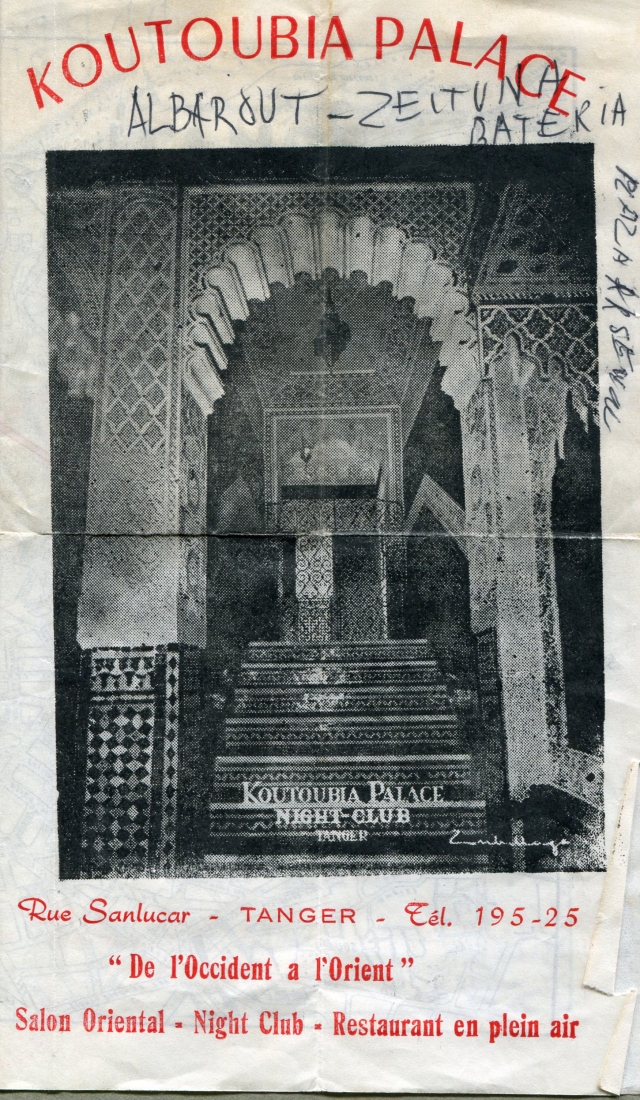 Tangiers! This is the front side of a tourist map.

From Algeciras, on the other side of the Straits of Gibraltar, I hitch-hiked north to Madrid, where I visited the Prado art museum, and bought a used bike and a fishing license. Earlier, I had asked my folks to save my postcards, to serve as a record of my travels. Here are the first of those:

At the Prado, Goya’s “Aqualarre” (postcard) 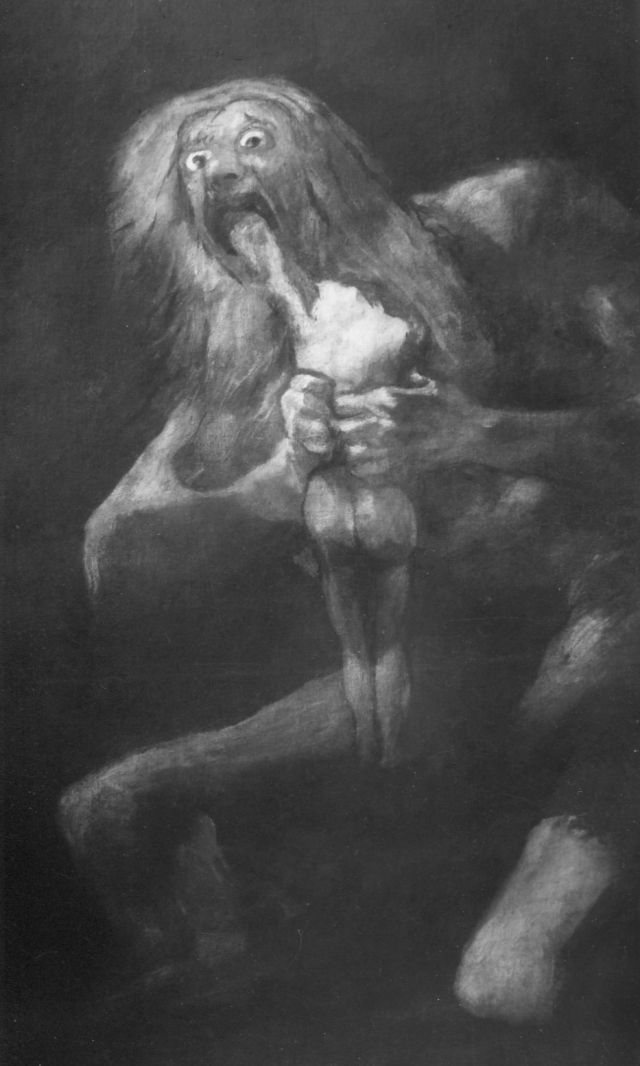 At the Prado, Goya’s “Saturno devorando a un Hijo”  (postcard) 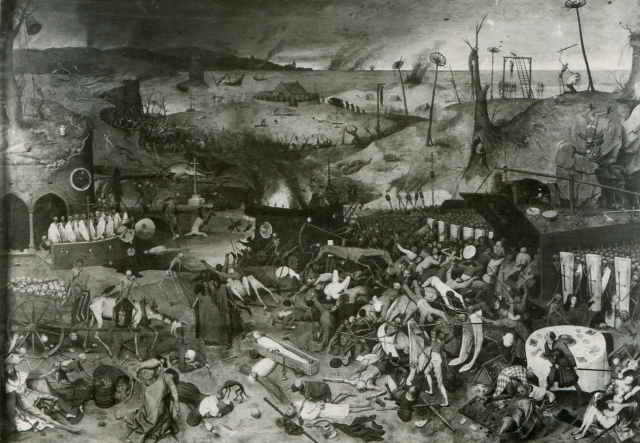 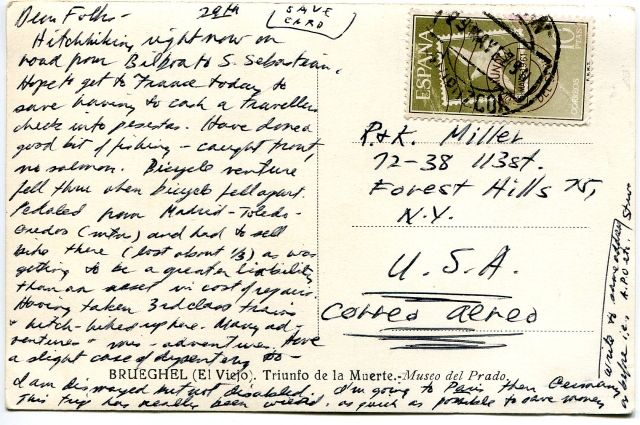 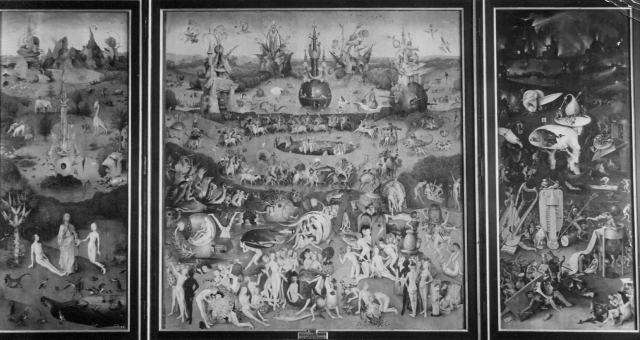 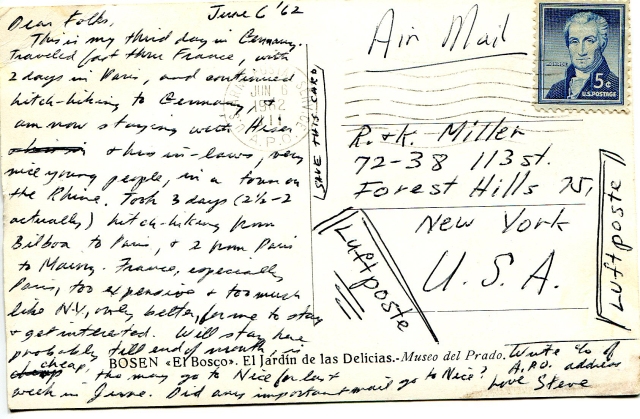 Backside of above postcard, mailed 6-6-62, from Germany 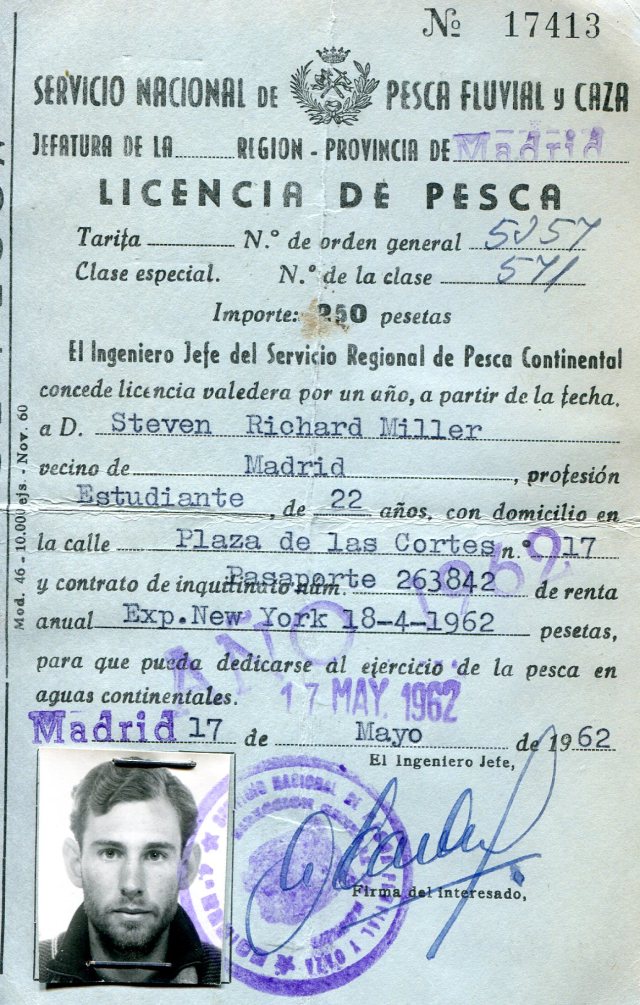 I left Madrid, now on the trail of Hemingway, who had written about parts of Spain that I wanted to visit – especially the Sierra de Gredos and the Rio Tormes, where he had fly fished for trout. I first pedaled south to Toledo. After obtaining lodging, I walked along the neck of land that connects the hill of Toledo to the adjoining mesa. To my right, the sun was setting. To my left, the full moon was rising. And both were positioned exactly on the horizon, 180 degrees apart. It was an unforgettable moment. A band was playing in the Plaza and I savored some of the local delicacy – marzipan. The following day I cycled to the west and arrived at the Parador de Gredos, housed in an elegant old stone building. There, I applied to fish on the Rio Tormes and, like Hemingway, caught some brown trout. As one might imagine, this pleased me no end! 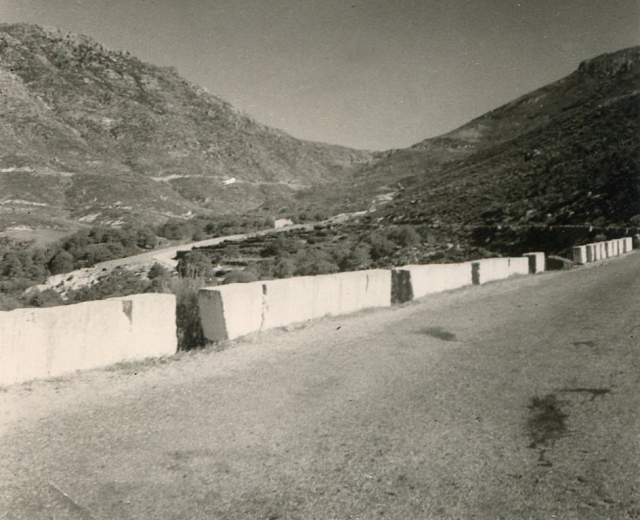 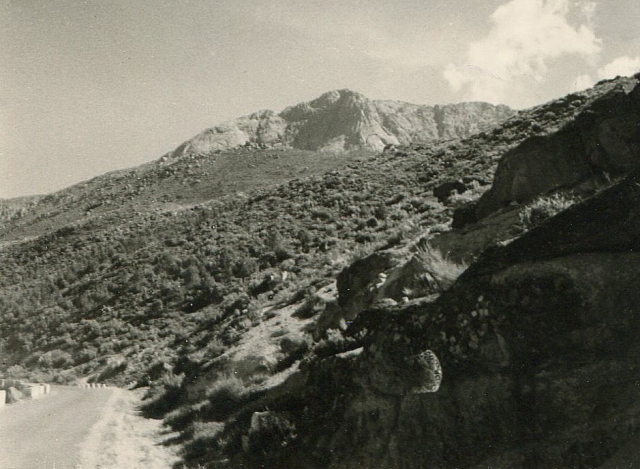 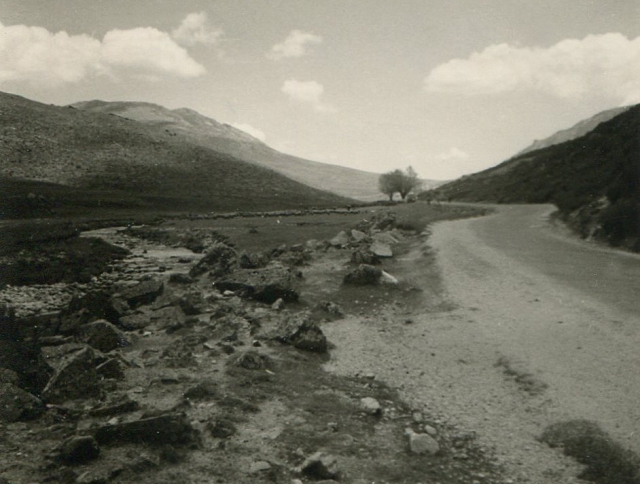 A “truchas” stream alongside the road 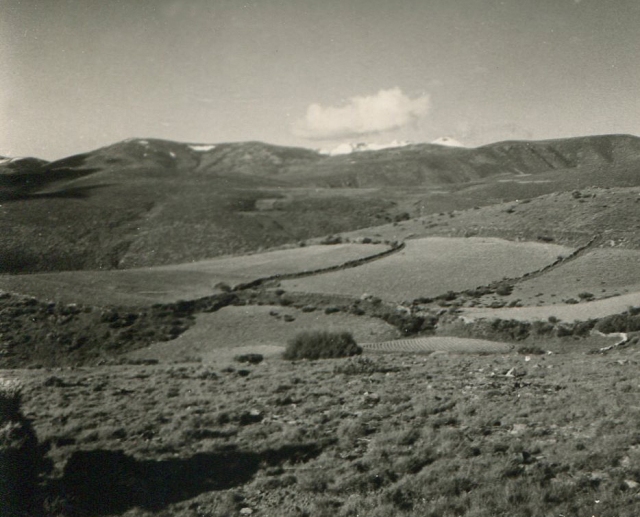 The Sierra de Gredos in the distance 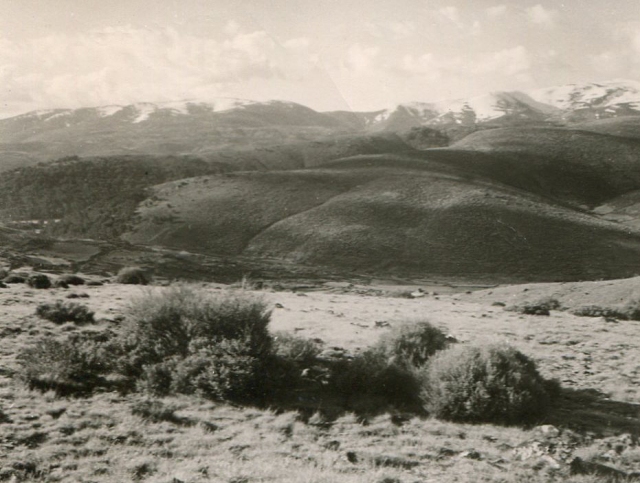 The valley of the Rio Tormes and the Sierra de Gredos 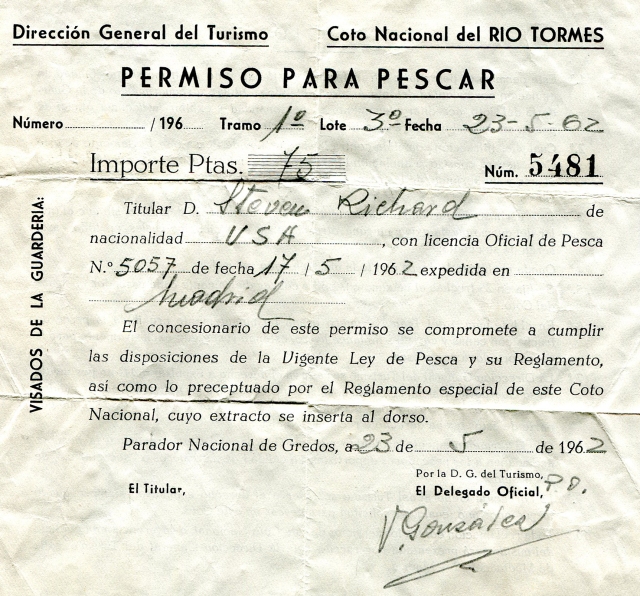 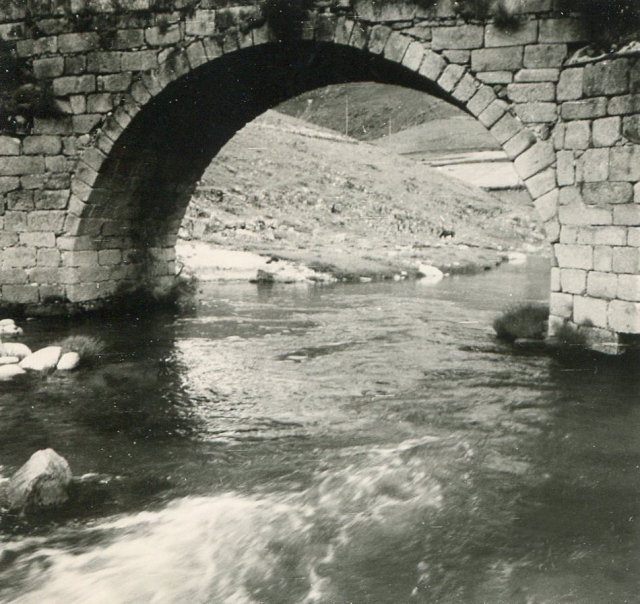 The bike was requiring constant repair, so I sold it to an employee at the parador and continued north by thumb and rail. My next destination was a river located along the north coast of Spain, the Rio Ason. 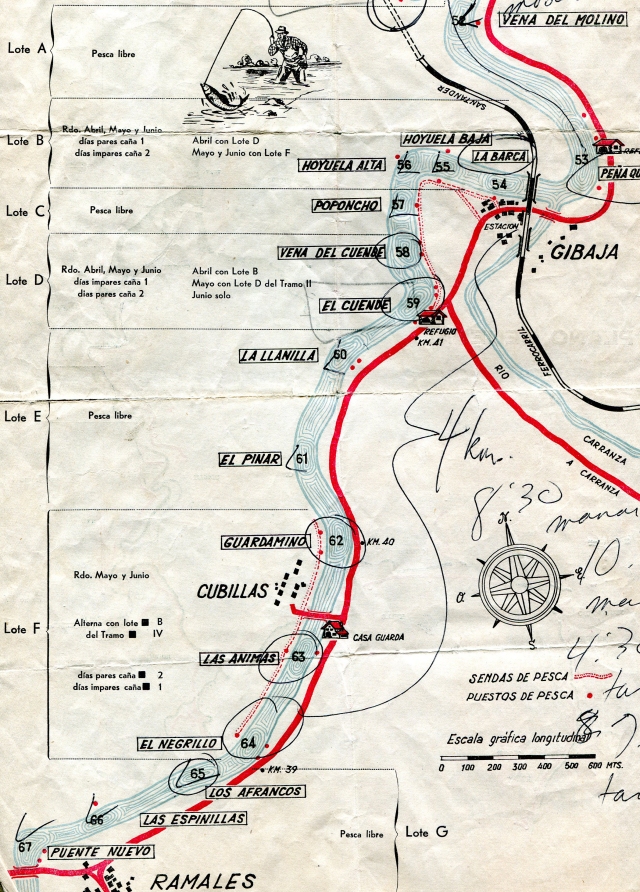 Fishing map of the Rio Ason 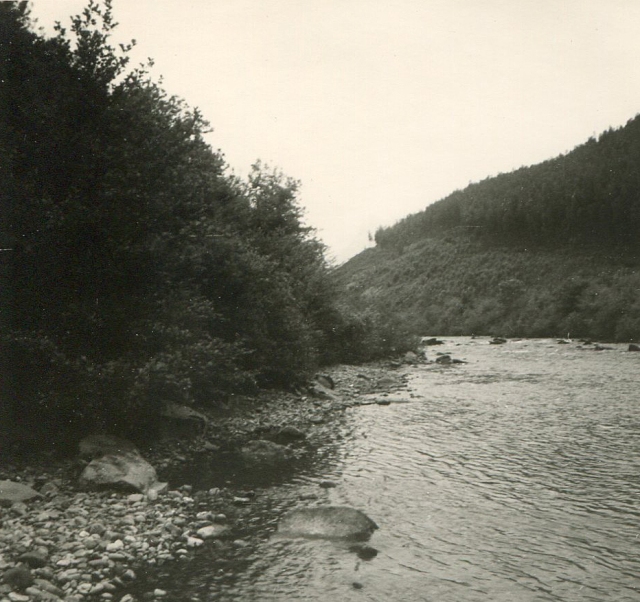 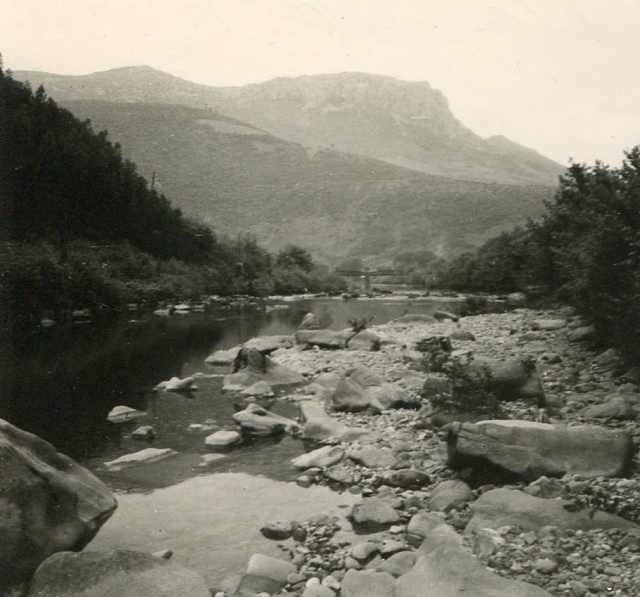 The Rio Ason, with the railroad bridge seen upstream 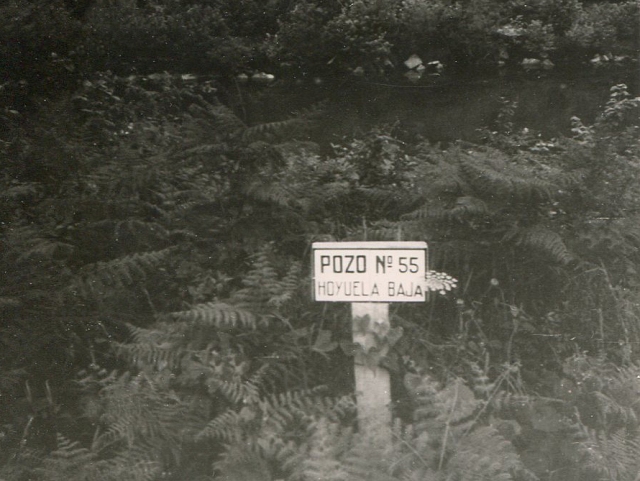 The Rio Ason was a salmon river, but I caught no salmon. It was probably the wrong time of year. I continued north into France, and on to Germany (as recounted on the postcard of June 6, above). There I met David Hiser, who was staying with his sister Marilyn and her husband, John Staples. John was a US Army chaplain, stationed at a base in Mainz. David’s girlfriend, Sara Jean Rittenhouse, was also around. 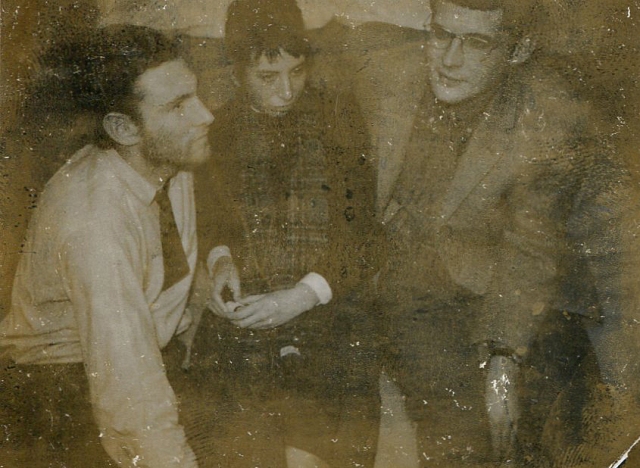 The next chapter concerns the beginning of my alpine summer, with some solo climbs in the western end of the Bernese Oberland: