Pyramid Lake, NV.  Apr. 17-19, 2015. The day after Kath returned from her visit to Cali, I got on a plane to Oakland. The plan was to spend parts of three days at Pyramid Lake with my son Ethan. We had last fished the lake in Dec., on which occasion we witnessed the catch and release of a 19 lb Lahontan cutthroat trout. We had the use, once again, of a friend’s Wrangler, and drove to Monument Beach on the afternoon of April 17. The photos seen in this blog are by Ethan and Steve Miller.

Here’s Ethan with a colorful male cutthroat, caught on a Bugger. The little blue thing seen at the bottom of the photo is a trailing foam beetle. 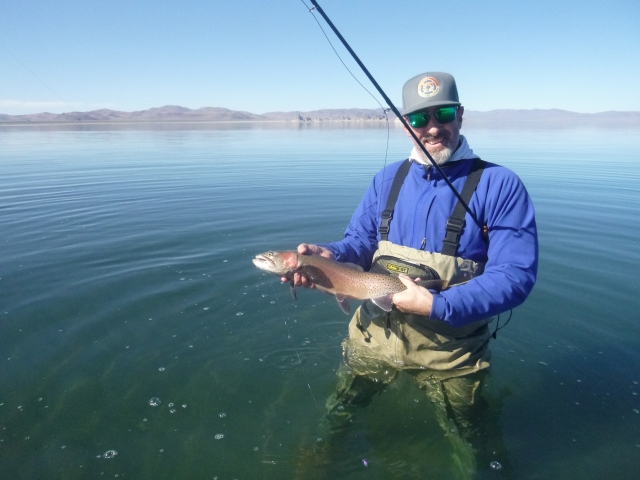 Ethan, with a typical size cutthroat, caught on a Woolly Bugger. The rod is a 9 weight.

We stayed at a Motel 6 in Reno, with a great breakfast place nearby – Jack’s Restaurant.

Me, with Eggs Benedict and a steak on the side.

One particularly effective Bugger was tied with “black” holographic tinsel wrap, which is actually black and other colors combined. This one has a tungsten conehead, but some prefer unweighted buggers. The sinking tip line gets the flies down, weighted or unweighted. 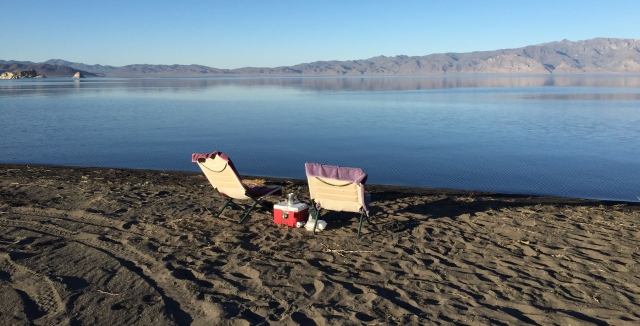 The good life at Monument Beach. Seen to the left are tufa pinnacles.

Ethan, with another nice cutthroat, taken 20 minutes after the fish seen above.

The cutthroats seen in these pix are the typical size caught. Occasionally, a larger (or much larger) cutthroat is caught. On the first day of fishing, a guy just up the line caught a 9 lb fish on his second cast, stripping a bugger. 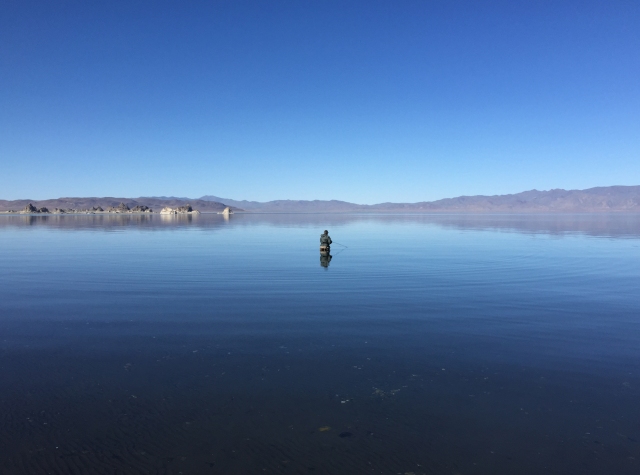 Monument Beach has an easily reached drop-off. The common wisdom has it that the trout like to cruise the drop-off. But we did see fish cruising in shallower water, coming right by us. I saw one that may have been 10 lbs, and another that was probably over 30 inches long. This latter fish took something off the surface after passing me by.

On our second day, we attempted to get a closer look at the tufa pinnacles, and turned off the main road at a spot identified as Washinton Rock. A jeep track led to the shoreline, which proved to be a mud bog. It is written that anyone who fishes Pyramid Lake more than a little is destined, eventually, to get stuck.

4-wheel drive vehicles can get stuck

It’s the front left tire that went way in

This part of the car is now resting on the chassis

So, Ethan starting walking to the south, towards a group of vehicles seen about two miles away, to either get their assistance or get within cell phone range. He succeeded at the latter, and enlisted the help of “Rez-cue”, the local Paiute Indian rescue service. After about an hour they showed up, and Vince hitched a long cable between us and his truck, and pulled us out while backing up.

Much chastened, we returned to Monument Beach and resumed fishing. 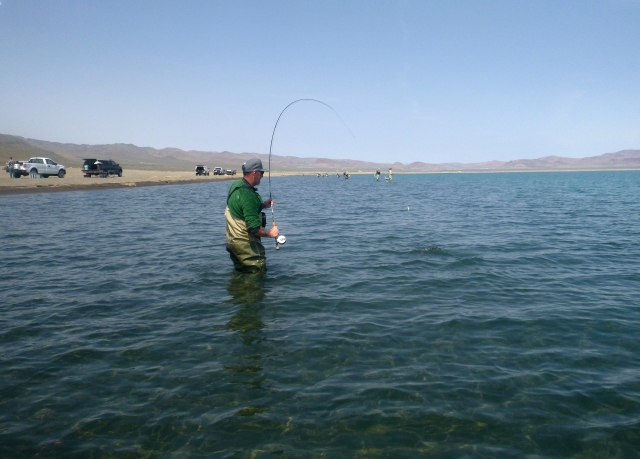 Arrayed down the shoreline are the latest thing in convenience, evolved from the original gizmo, a simple ladder. 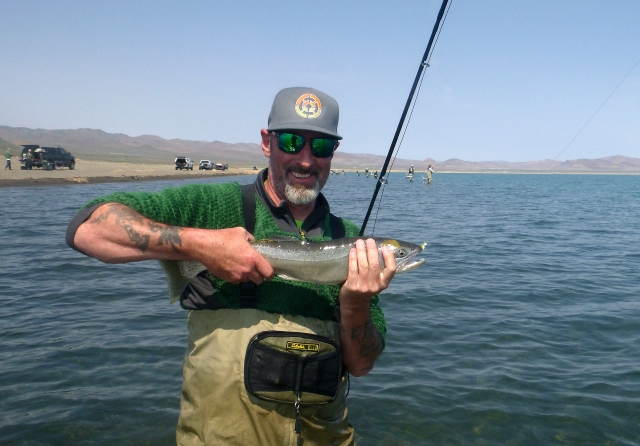 This trout took a white foam beetle, trailed behind a bugger

Being the weekend, lots of local fishers showed up, and brought with them their fishing platforms, complete with seats. Because throwing buggers on a 9 weight all day can be very fatiguing, many of the fishermen we observed chose to sit and fish with indicators. The usual rig below the indicator was a bugger or balanced leech, paired with a foam beetle, “Maholo” nymph or a so-called Chironomid midge pupa, extending (in this case) to about 9 feet below the indicator. The balanced leech is tied in such a way as to assume a horizontal position in the water. After looking at someone’s rig, Ethan announced that the balanced leeches I had tied were too big, so he tied on a smaller bugger with a rifling hitch, which leveled out the bugger. Although we both devoted some time to the indicator routine, only Ethan managed to land a fish in this way. His observation was that changing back and forth between one rod rigged for stripping buggers and another for indicator fishing was the way to go.

I caught this big jawed cutthroat on our last day, on a weighted  bugger

Pyramid Lake has a charm all its own, and provides plenty of opportunities for pleasant camping. You don’t have to commute between Reno and the lake if you don’t wish to. In fact, Ethan, his girlfriend Flo and two friends, have plans already in place for a camping trip to the lake in mid-May. Am I envious? You bet I am, but I’ll be hard at work in May. It won’t be until October 1, when the season opens, that Kath and I get to return, while on our annual road trip to California. 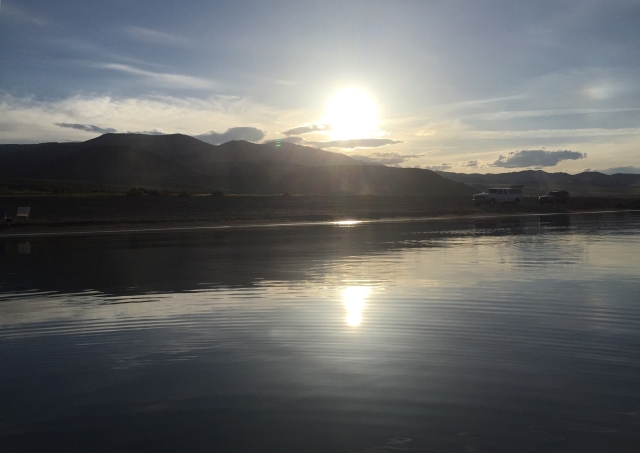