One can zoom across the Sierras by I-80. But it’s way more soulful, as my son Ethan pointed out, to cross via Tioga Pass. Since we were in no real hurry and had designs on certain locales on the eastern side of the mountains, we chose the latter. It was cloudy as we left the Bay Area, and it began to rain as we passed through Groveland. Then, as we drove uphill into Yosemite we began to encounter the aftermath of last year’s Rim Fire. Wow. That was a BIG fire! We left the burned portion of the forest further on, arriving at our evening’s campsite at Porcupine Flat. It froze that night, and the forest steamed in the morning sun. 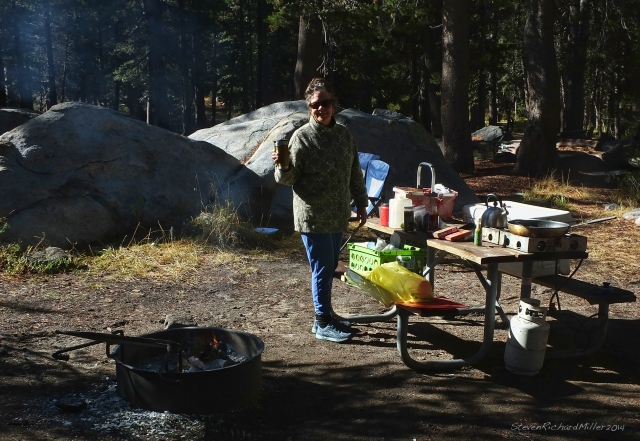 Not many miles beyond our evening’s campsite, we came to the spectacular Olmsted Point. This is a spot that always deserves an unhurried visit. On this occasion, we climbed the low-angle slabs of a small dome that rises across from the parking area. And we saw that the upper elevations had been blanketed by snow the prior evening. 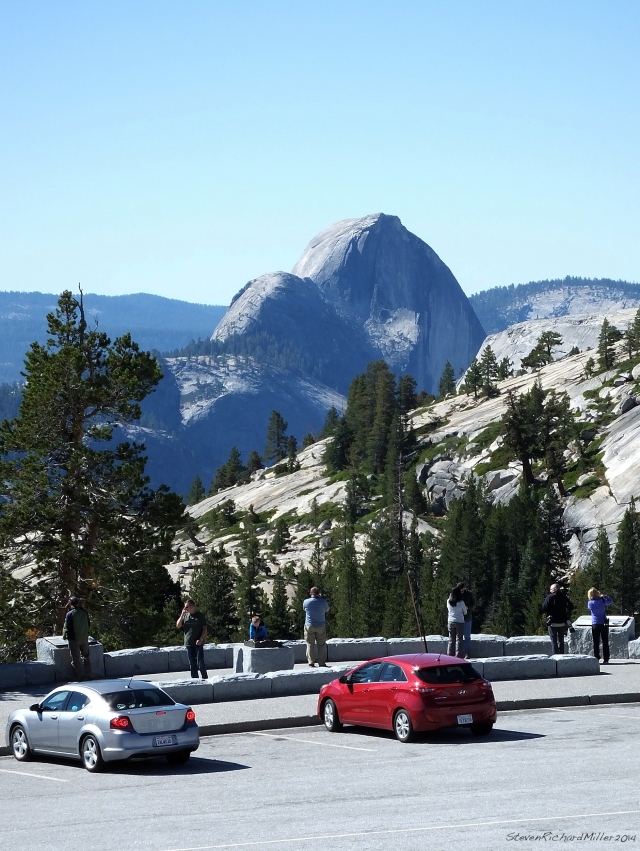 The Olmsted Point parking area and Half Dome 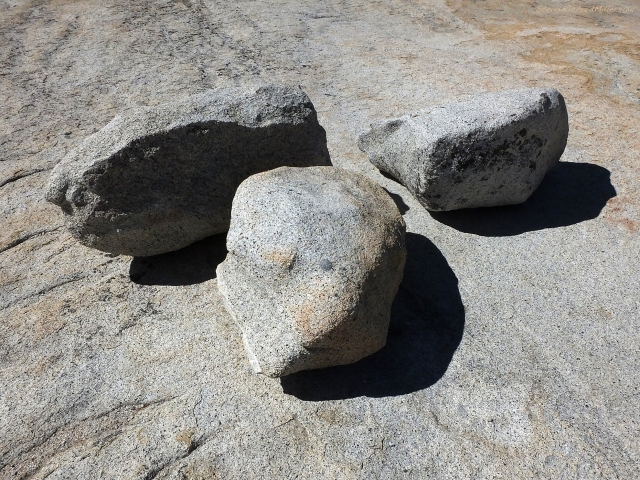 Olmsted Point, view of Tenaya Lake and Mt. Conness. On the left is the climbing area known as the Stately Pleasure Dome and the small dome to the right, Pywiack Dome, is another climbing area 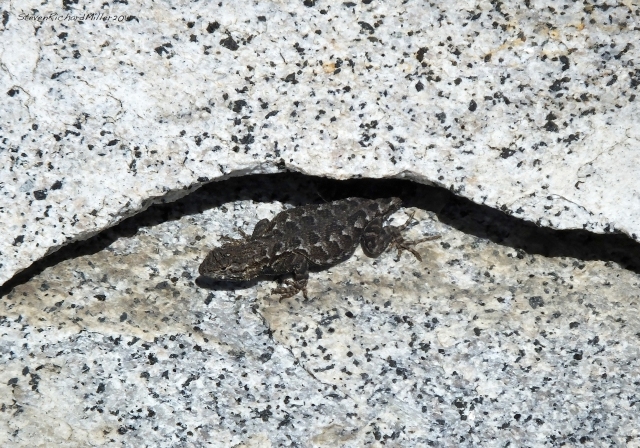 Lizard on the slabs 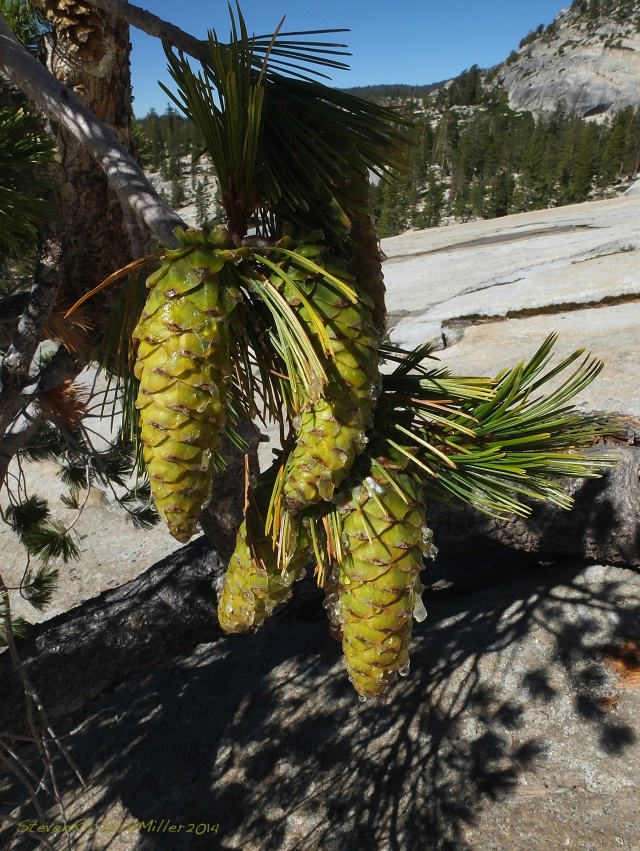 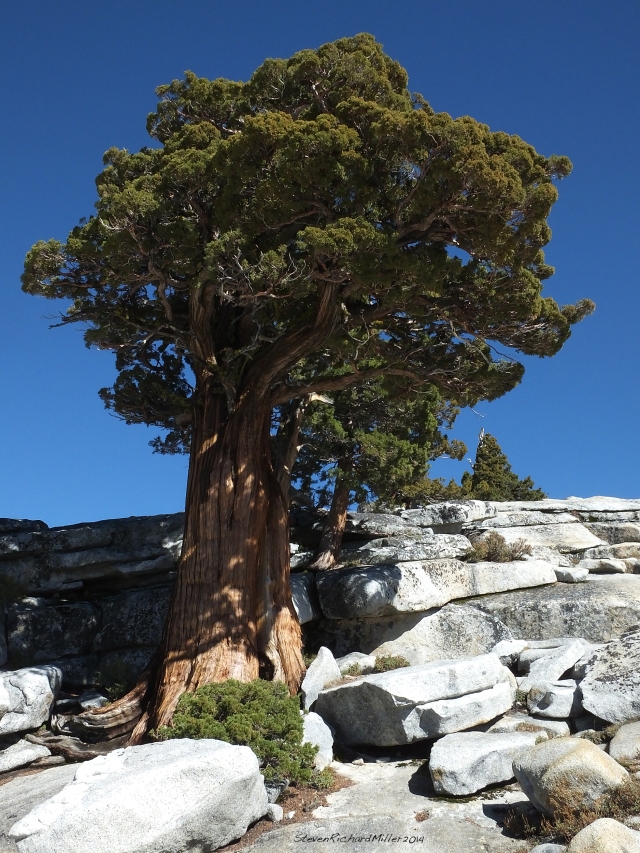 A gorgeous specimen of a Sierra juniper.

Telephoto view of the Stately Pleasure Dome, featuring the Great White Book route. To the right are the friction slabs of Pywiack Dome.

Tenaya Lake and Mt. Conness, from the slabs above the road

From Olmsted Point,  we drove about a mile to the base of the Stately Pleasure Dome and watched some climbing action, which included a free solo ascent of the Great White Book, and two climbers on a route just to the left of the former.

To the left of the Great White Book, two climbers on a friction pitch protected by bolts 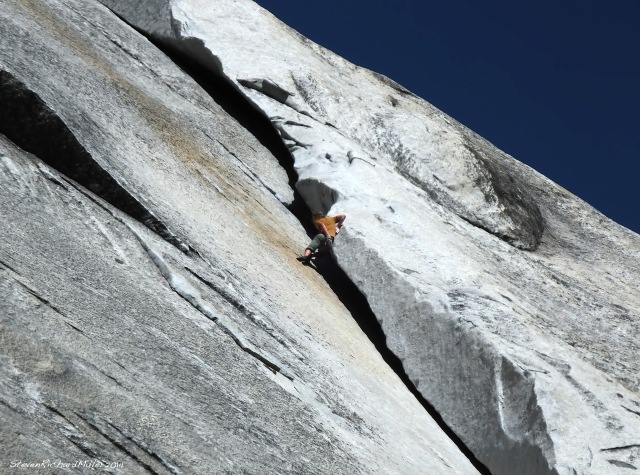 Climber free solos the Great White Book, which is considered pretty easy and which, in any case, doesn’t have any protection 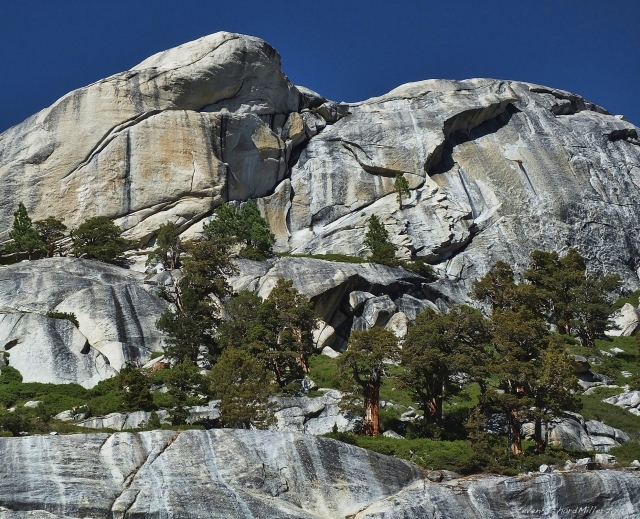 Cliff and trees opposite Tenaya Lake

A short ways further up the road is Tuolomne Meadows, another wonderful place. We climbed the low-angle slabs of Pt. 9163.

Tuolomne Meadows, at the base of Pt. 9163, a small low-angle dome located at the western end of the Meadows 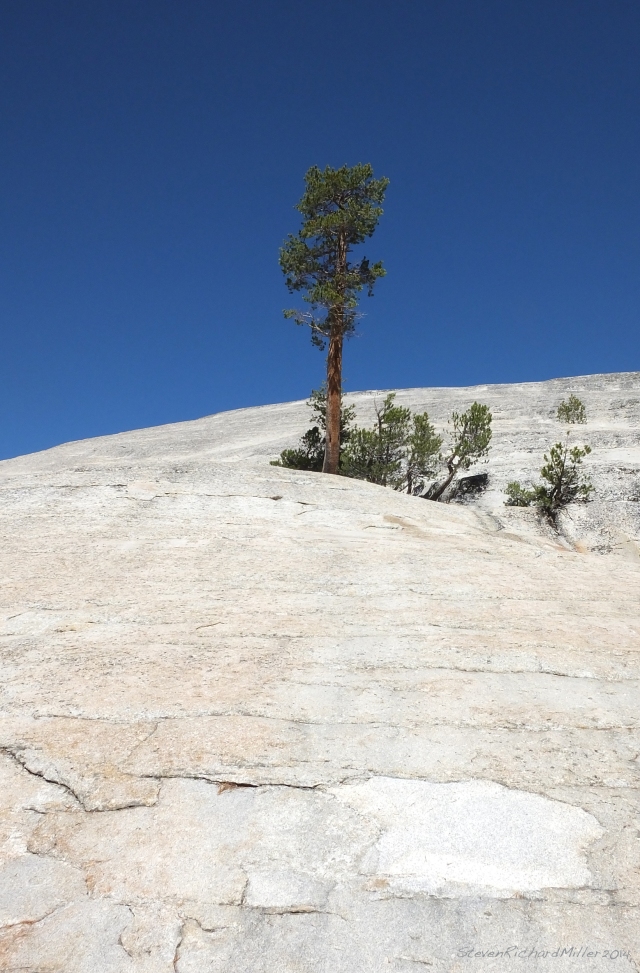 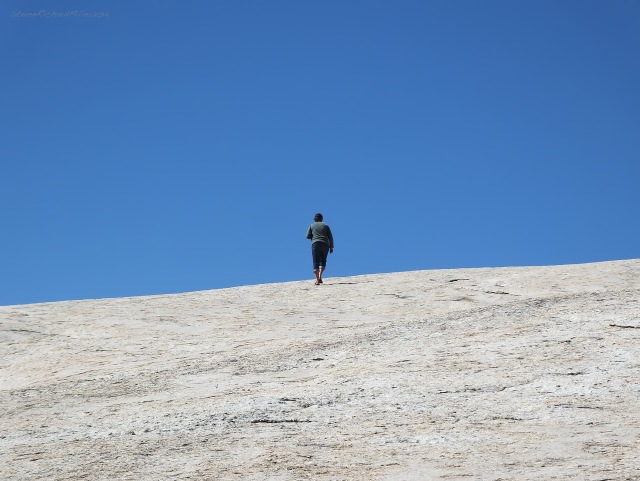 Glacial polish on a dome opposite Pt. 9163

Kuna Crest and the Meadows, view east from Pt. 9163

360 deg. panorama from Pt. 9163, by Kathy Miller. Using my new Fuji HS50EXR, this was achieved by a simple turning of the camera in a full circle. And, this shot didn’t employ a tripod, although a tripod would make it that much easier to get perfect horizontal tracking of the camera. 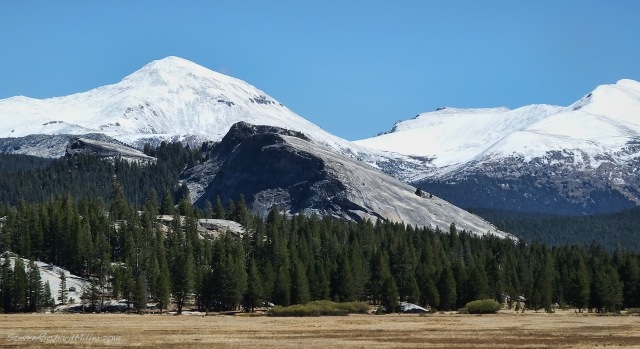 Lembert Dome, at the eastern end of the meadows

Mammoth Pk, at the northern end of the Kuna Crest, from the Tioga Rd. 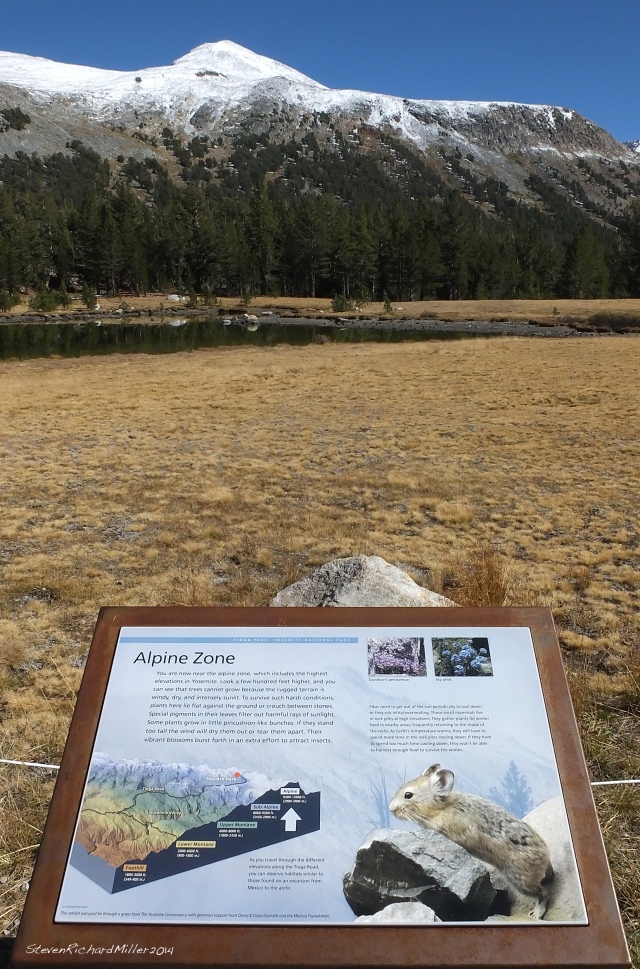 From Tioga Pass the road descends steeply to the east, and arrives at the village of Lee Vining and Mono Lake. When she was a child, Kathy and family boated on Mono Lake before it was robbed of much of its water by the City of Los Angeles. 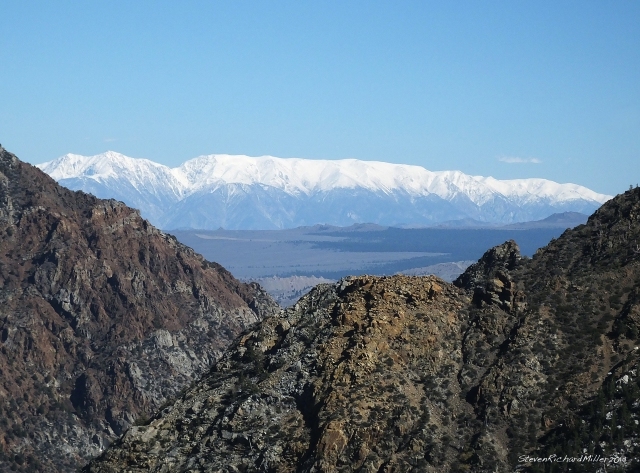 View to the east, of the White Mountains

Mono Lake and the White Mountains 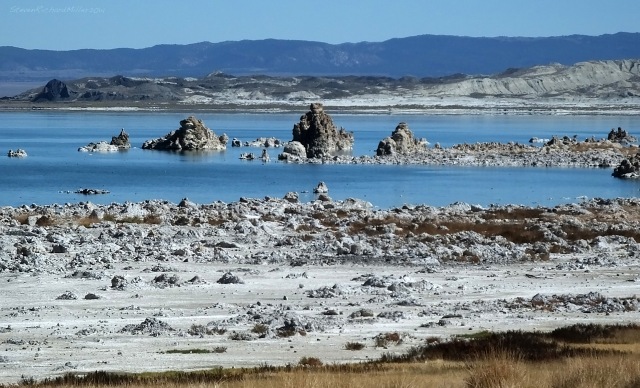 The story of saving Mono Lake

View to the south, of Mono Lake and the Sierras, from Hwy 395 on the way to Bridgeport

Bridgeport is another wonderful place – a town that hasn’t visibly changed over the number of decades that I’ve known it (starting in the early 60s). It sits at the eastern edge of a well-watered valley that is full of good looking beeves, with a magnificent view to the west of the peaks of northern Yosemite NP. At higher elevation, adjacent to the western extremity of the valley is Twin Lakes and the private resort of Mono Village, located at the upper end of Upper Twin Lakes. Directly above Mono Village rise Matterhorn Peak and the Sawtooth Ridge, which form the northern boundary of Yosemite NP. I’ve spent a lot of time in those peaks, both on foot and on skis. Having discovered Albert’s Butcher Shop on a prior visit, we returned, to purchase steaks and other meats. The Porterhouse steaks we purchased there were of an almost obscene thickness and size. The meat was expensive, but we were on vacation, after all! We had no difficulty finding a campsite for the evening, at the lower Twin Lake CG. We had big plans for the morrow! 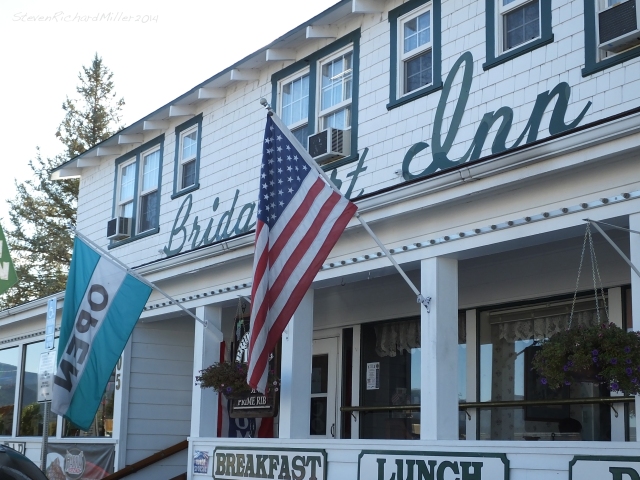 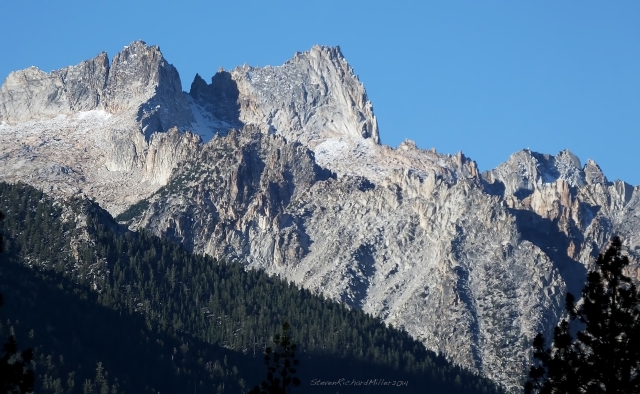 Matterhorn Peak (left),  and the Sawtooth Ridge, from the Bridgeport Valley

Our campsite at Twin Lakes, and a view of the Sawtooth Ridge

Part 8 is about fishing! It’s about the East Walker River and Pyramid Lake, NV. Don’t miss it!