Kathy and I have made a number of trips to S. Padre Island, near Brownsville, TX. The purpose of these trips was to fish the fabulously rich waters of the Gulf of Mexico and the Laguna Madre. We would make these trips in the fall, between our summer rafting season and the winter ski season. 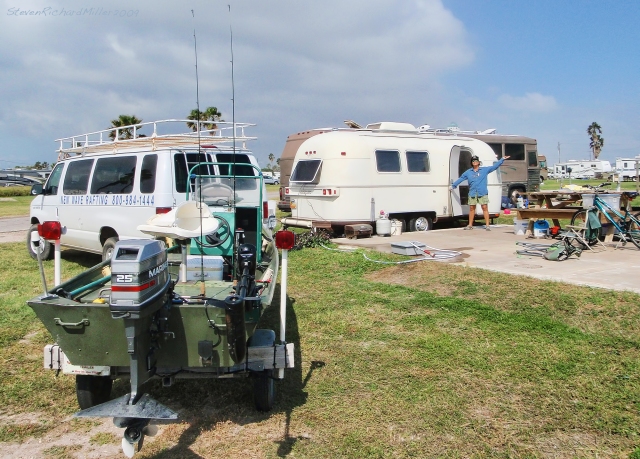 We’ve spent weeks at the Isla Blanca County Park campground, on the southern tip of S. Padre Island, or staying in a motel in the nearby town of Port Isabel. On days when we chose not to fish (often because of bad weather), we would go bird watching/nature walking at some of the parks and wildlife refuges in the area, which includes the Laguna Atascosa and Santa Ana NWRs, Gladys Porter Zoo and more. This area (both the Gulf Coast shoreline and wetlands and the Rio Grande Valley) is considered a bird watchers’ paradise, with seabirds, wading birds, ducks, raptors and songbirds, some of which can be seen in few or no other places in the US.  Migrations of butterflies also show up in the area. The Rio Grande runs through Brownsville, and  enters the Gulf of Mexico not far downstream. It isn’t very “grande” at the “boca”, called Boca Chica. And for a year or two in the early 2000s , it didn’t have sufficient volume to push aside the sandbars and make it to the sea.

Santa Ana NWR is located on the Rio Grande, upstream of Brownsville, and south of McAllen. 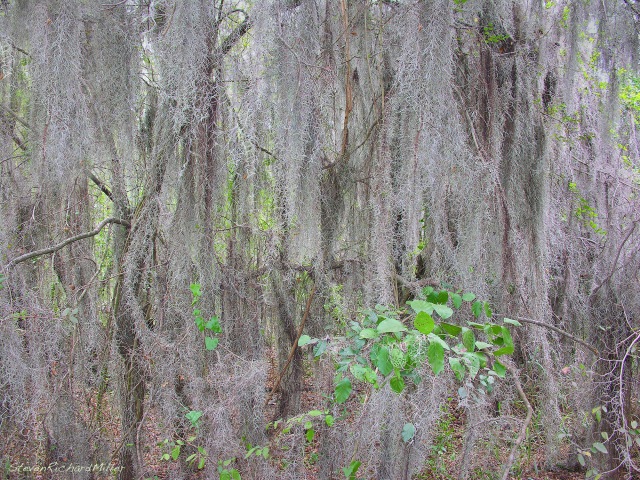 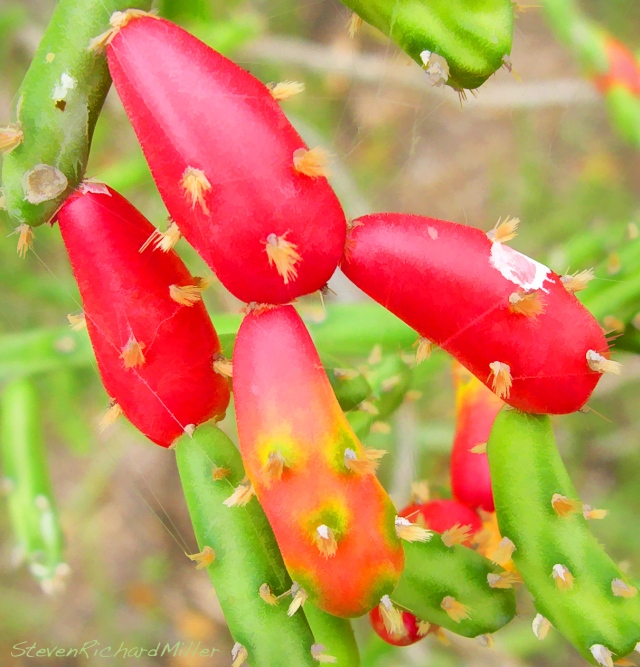 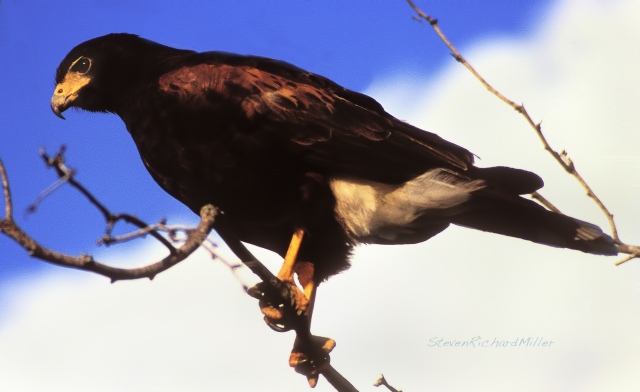 The Gladys Porter Zoo is located right in downtown Brownsville. 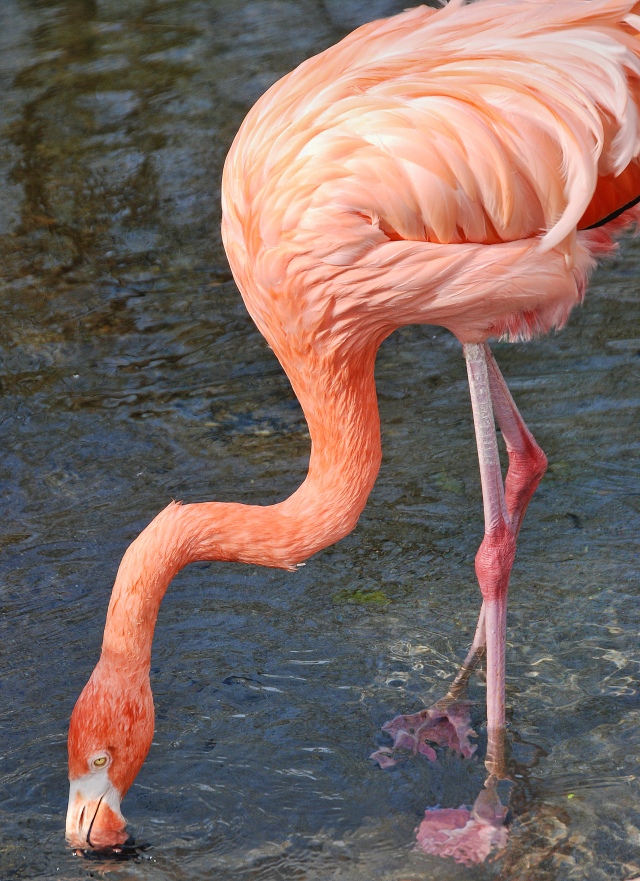 One can drive on the wet sand of the beach (on the Gulf of Mexico) from the city of S. Padre Island north, approximately 25 miles to where you are stopped by the Mansfield Cut.

Great Blue Heron, on the beach 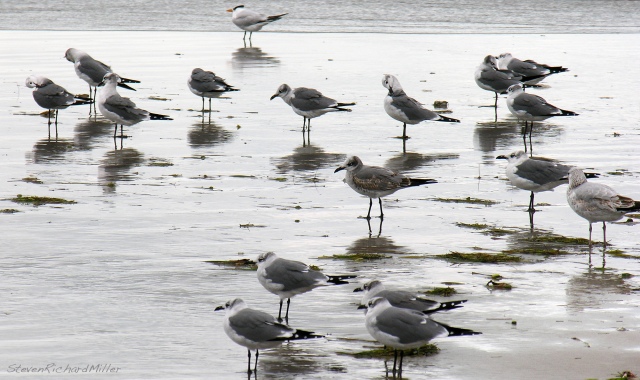 Laughing gulls and a tern

Laughing Gulls, facing into the wind, on the beach

Snowy egret, on the beach, next to the Mansfield Cut south jetty

There’s lots of bird and other life to be seen along and near the north jetty of Brazos Santiago Pass, which is where the southern end of the Intracoastal Waterway exits to the Gulf, and where shipping enters the Brownsville Ship Channel. The Isla Blanca County Park campground sits next to the base of the jetty.

The base of the north jetty is awash in storm waves

The USS Saipan Assault ship heads into Brazos Santiago Pass, on its way to Brownsville for dismantling

Pelicans looking for a handout at the Isla Blanca boat ramp, sunset view to the west

Sunset at the Oyster Bar

Dophins, in the Intracoastal Waterway at sunrise

The mouth (or “boca” in Spanish) of the Rio Grande is found 8 miles south of S. Padre Island. You get to the beach from Brownsville, and then drive a few miles down the beach, hoping not to get stuck in the sand. On our one occasion there, we had a four-wheel drive vehicle. The Rio Grande is disappointingly narrow and shallow where (and when) it crosses the beach and enters the Gulf. Shipping once used the Rio Grande to get to Brownsville!

Looking upstream at the Rio Grande at the mouth, known as Boca Chica

Looking across the Rio Grande at a lighthouse in Mexico

American avocets, brown and white pelicans, gulls and terns, on the Mexican side of the beach. The Rio Grande is seen in the foreground.

Brown and white pelicans, gulls and terns, on the Mexican side of the beach. The Rio Grande is seen in the foreground.

American avocets and black skimmers, on the Mexican side of the beach. The Rio Grande is seen in the foreground.

Kathy and I are thinking of returning to SPI this coming fall. If so, I intend to keep fishing fever somewhat more at bay, and spend more time with bird photography. There are a few birds, in particular, that we’ve seen but which I failed to photograph. Stay tuned!