My last post advised that Kathy and I were about to head south for Christmas vacation with the family, in Sierra Vista, AZ. As also mentioned, we would stop at the Bosque del Apache NWR, south of Socorro, on the way. We arrived there in late afternoon and located a viewing platform next to a large pond. Birds were already arriving – sandhill cranes and snow geese. We watched and photographed them coming in from their feeding fields to the north, until a little after the sun set behind the San Mateo mountains to the southwest. If you are a nature lover, this spectacle should not be missed. It is an experience of the plenitude of nature as it existed before western “civilization” arrived on the continent. The abundance and beauty of the birds is mind-boggling. Here is the link to my Flickr collection of Bosque photos: http://www.flickr.com/photos/stevenrichardmiller/sets/72157639217317395/ 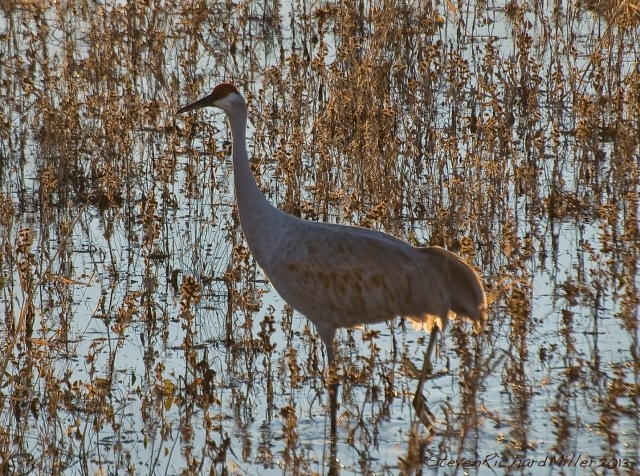 We drove south to Truth or Consequences, to spend the night. We got an inexpensively-priced motel room at the newly renovated Rocket Inn, and, on the advice of the proprietors, went for a soak at one of the numerous natural hot springs bath facilities located right there in town, next to or near the Rio Grande. Did you know that “T or C” was originally named “Hot Springs”? Here’s a quote from their website as to how their name got changed: “The town’s name was changed from “Hot Springs” to “Truth or Consequences” on March 31, 1950, after Ralph Edwards, the host of the popular game show “Truth or Consequences,” called for any town in America to do so – in celebration of the show’s ten year anniversary”.

The next morning we continued south on I-25, and then west at Hatch. We were driving into weather, and I took the following photo on I-10, west of Deming, looking north past the railroad tracks that here parallel the highway.

Just before entering Arizona, we turned south on Hwy. 80, heading for the Chiricahua Mountains, and the Chiricahua National Monument. We drove into the spectacular canyon of Cave Creek, at the little hamlet of Portal. This a famous birding venue, which, like the other “sky island” ranges of SE Arizona, hosts Mexican species of birds that are seen no where else in the 48 states. We continued westward over the range in a snowstorm, to the National Monument that is accessed from the west. We drove the Bonita Canyon Drive, that ends at the high point of Massai Point, elev. 6870′. Here is the link to my Flickr collection of Chiricahua photos: http://www.flickr.com/photos/stevenrichardmiller/sets/72157639255020014/

Wecontinued west and south in the direction of Bisbee, passing through the little town of Elfrida. We later learned that there is a private sandhill crane refuge along Whitewater Creek, which runs down the center of the valley, and passes through Elfrida. We saw a few cranes in the fields in that area.

The US Army’s Fort Huachuca and it’s satellite town of Sierra Vista sit at the foot of the Huachuca Mountains. We were staying on the base, as the guests of  the Griffins. Greg Griffin is a Lt. Colonel, presently stationed there. The next day we visited Ramsey Canyon Nature Preserve, recommended to me by my brother Joel, who had visited there before. It is another birder venue, just a short ways south of Sierra Vista. It is run by the Nature Conservancy, and just behind the nature center we saw one or more Anna’s hummingbirds at the feeders. In December! There is a beautiful walk up the canyon, admist sycamores, maples, alligator junipers, cottonwoods, uncommon species of pine, cacti and more. I encountered and photographed two different woodpeckers on the same tree – an Acorn woodpecker and an Arizona woodpecker. The latter’s range in the US is limited to the sky island mountain ranges of SE Arizona. Back at the nature center we saw a Painted redstart plucking insects from  under the eaves of the building. Here is the link to my Flickr collection of photos from Ramsey Canyon: http://www.flickr.com/photos/stevenrichardmiller/11657530063/in/set-72157639211757236

A birder we met while at Ramsey Canyon mentioned that the Elegant Trogon could be seen in Huachuca Canyon, which is immediately uphill from the base. We drove past the parade ground, and up the canyon to the end of the dirt road. This canyon, like Ramsey Canyon, has a permanent creek, and much the same riparian vegetation as Ramsey Canyon. Indeed, we did see the trogons. We visited the canyon more than once, and I got distant views but no photos worthy of presentation here, while Kathy had a  few minutes with a relaxed male trogon in full view at 30′! But she doesn’t carry a camera. At the northern limit of its range, the Elegant Trogon breeds in Arizona’s southeastern mountain ranges, the “Madrean sky islands.” Colorful and strange tropical birds, trogons perch quietly for long periods. Like owls, they can see in low light and turn their heads through nearly 360 degrees. The Greek “trogon” means gnawer and describes its hefty, serrated bill. Lovely, and rare in the United States, the Elegant Trogon attracts thousands of ecotourists to Arizona each year. 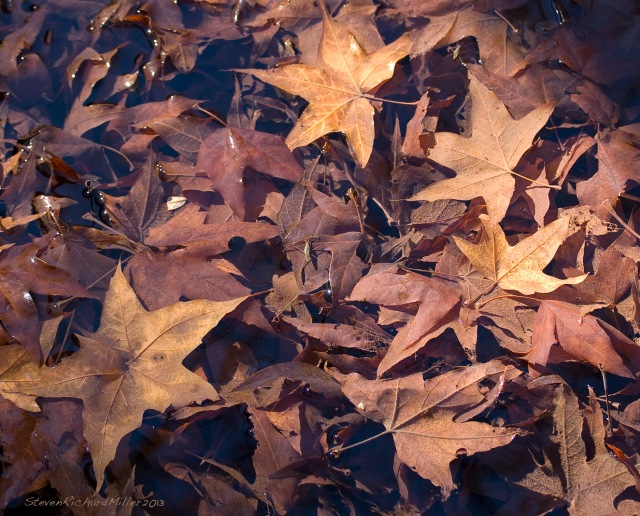 Sycamore leaves and a water strider, in the creek

And here is the link to my Flickr collection of photos from Huachuca Canyon: http://www.flickr.com/photos/stevenrichardmiller/sets/72157639321214356/

Another nearby place of interest that we visited is Kartchner Caverns State Park. Photography is prohibited in the caverns, but here is a link to their website: http://azstateparks.com/parks/kaca/.

We left Fort Huachuca the day after Christmas, returning to a busy holiday season of teaching skiing at Taos Ski Valley. We were delighted with what we found in SE Arizona, and hope to return.