Snow now blankets the ground at La Bolsa. Now, just where is La Bolsa? Allow me to explain. La Bolsa is a sub-unit of Embudo, which is an ill-defined area found along the Rio Grande (NM), with Rinconada at the upstream end and Embudo Station at the downstream end. It centers, I would guess, on the Embudo Post Office. La Bolsa means “stock market” in Spanish, which it certainly is not. But bolsilla means pocket, which is more to the point. Some say La Bolsa means purse. Rincon also means pocket, of a sort. In the SW canyon country, a rincon is a cut-off river meander. Rinconada means pocket kind of place, then. Embudo means funnel, which I believe derives from the narrows of Embudo Creek, below the town of Dixon, where the Tool Shed theater is now located. Here, the creek narrows as it cuts through an upthrust of hard metamorphic rock.

The Camino Real, the Spanish conquistadors’ Royal Road, from Mexico north to these parts, follows the Rio Grande through this lower part of the Rio Grande Gorge. It passes right through our property here in La Bolsa.

Also of interest is the fact that the river follows the Embudo fault here. Not only is the fault mainly responsible for the cutting of the Pilar Cliffs, found just upstream, it is also responsible for creating the sharply tilted hills seen along Hwy 68. These are hills composed mainly of lake sediments, which flat-lying sediments were subsequently covered by a flat-lying lava flow. When the fault thrust these hills up, the portions of the lava field that remained on the summits of these hills were tilted one way or the other, creating tilted mini-mesas. These tilted mini-mesas are easily picked-out. Tilted layers of lava can be seen especially well in the summit of the hill that stands immediately upstream of where Hwy 68 crosses Embudo Creek, when viewed from the south. How about the dirt hill that sits opposite the junction of Hwy 68 and 75, the Dixon turn-off? This hill is shown on the map as Barranco Blanco. It has been much-eroded and lowered, relative to the other hills, after it lost its hard lava cap at some point in the past.

Future posts will go into this topic more deeply. Stay tuned. In the meantime, the snow has caused our cranes and sunflower to wish they were elsewhere. 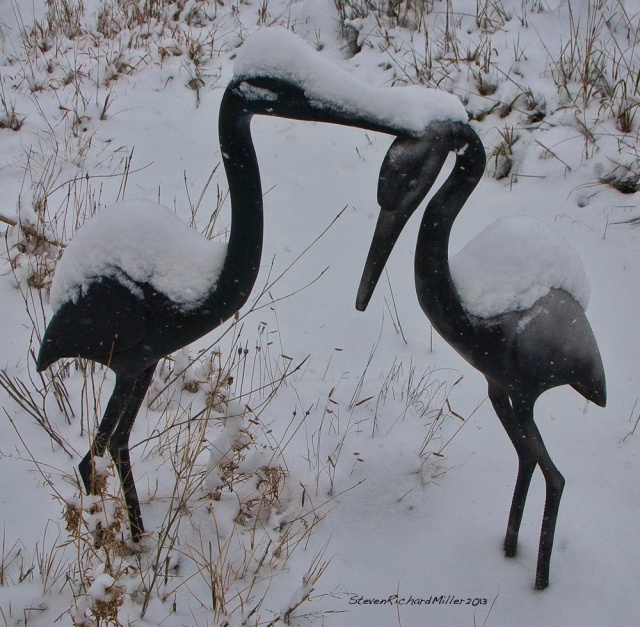 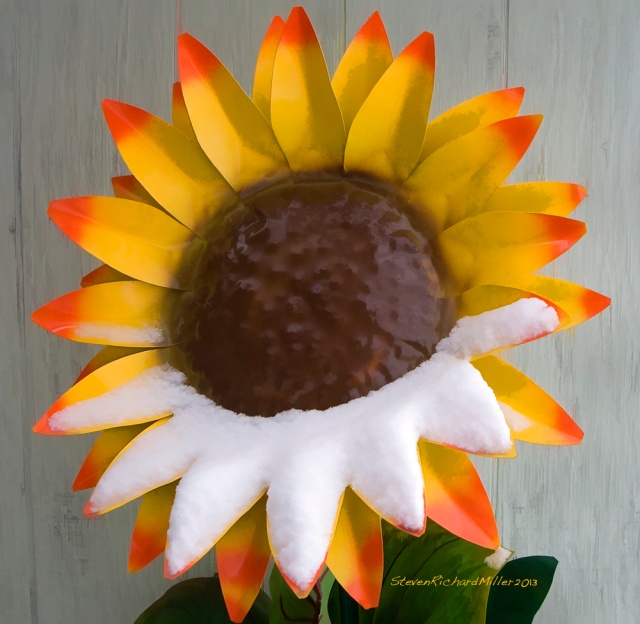