Prologue: In August of 1977, Kathy and I honeymooned in Wyoming. The highlight of the trip was a 10-day backpack trip to Titcomb Basin, in the Wind River range. We had hoped to get spot-packed in, but it was too expensive. So, we carried big packs, and ate as much fish as possible. Here is the Flickr link for that trip: 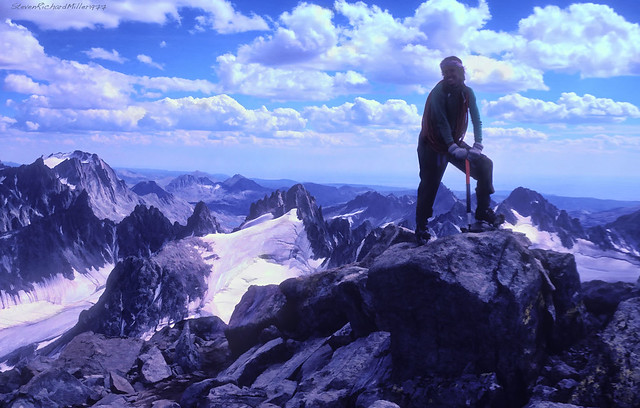 This last winter I met an interesting guy who does llama-packing into the Wind Rivers. He invited Kathy and me to do a trip with him. His deal was simple. We provide and cook the food, and he runs the llama string. We set up an 8-day trip, to start 9/3. We would be accompanied by Lorrie and John Lopez – old Outward Bound friends from Santa Fe. More recently, John and I have become fishing buddies. Our destination was – you guessed it – Titcomb Basin. So … 36 years later, we would return to the scene of the crime. Indeed, I hauled my geriatric ass (to quote Terry, aka “El Llamero Vagabundo”) to Island Lake and back. Needless to say, we saw lots of other people, as this route has become one of the two most popular in the Winds. In 1977, we saw only two other persons (on the summit of Gannett Pk.) in our entire time there!  The 6 llamas behaved well and carried our river-style camp with ease.

5 of our 6 llamas, along with “El Llamero Vagabundo”

The fishing was very good. Island Lake had goldens, cutthroats, rainbows and (probably) cutthroat/golden hybrids. From her description, it appears that Kathy caught a pure-bred golden. I didn’t catch a golden. Nor did Lorrie or John report catching any. Our fishing technique was very straight-forward – cast a terrestrial imitation and wait for a fish to swim by and eat it. Cast again after the wind had drifted your fly to shore. As will be seen in the photos, I used only a Crowe’s Beetle and a Royal Parachute Madam X.

View of Elephant Head, which we climbed in 1977

Kathy and I gazed at the peaks we had climbed in 1977, wondering how we had managed it. “We did THAT?” Being 36 years older will do that to you, I guess. Thanks to El Llamero Vagabundo, who made our return to the Wind Rivers possible.

After returning to civilization and the Log Cabin Motel in Pinedale for a night, we drove up the valley of the Green River to lower Green River Lake, to see Squaretop. Here is the Flickr link to the entire Wind River trip: 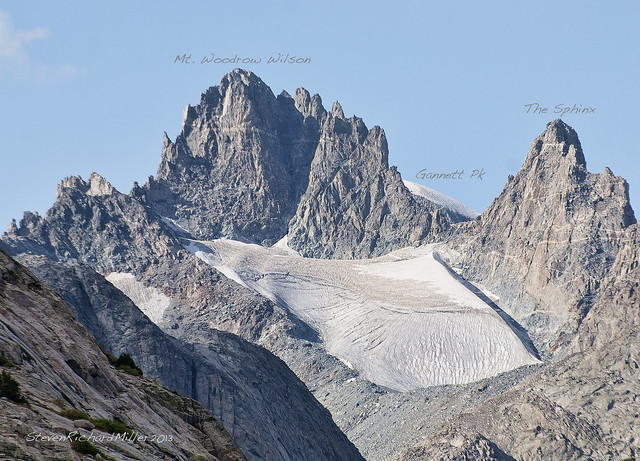 Aside: The Green River has figured large in our outdoor life. We stood directly above it’s source glacier, tarns and creeks when on the summit of Gannett Peak. Now, we were visiting the Green as it exited the Bridger Wilderness. The fishing in this stretch of the Green wasn’t great, due to (as we learned) its history as a conduit for “tie drives”. Huge numbers of trees were felled at the upper end of the valley and floated downstream, to be cut into railroad ties. These drives battered the river banks, causing the river to widen and shallow. It has yet to recover. Downstream of Green River, Wyoming (where Major Powell began his trips of exploration), we have fished the Green River below Flaming Gorge Dam numerous times. The fishing there is about as good as it gets. The Gates of Lodore, in the extreme northwestern corner of Colorado, are found 30 or so miles downstream. It is the put-in for the fabled river trip through Dinosaur National Monument, which we have done repeatedly. Downstream of the Vernal, Utah area, is Desolation/Gray Canyons, which I have floated a few times, and where I began my career as a river guide. Gray Canyon ends just upstream of Green River, Utah, which is the put-in for Labyrinth, Stillwater and Cataract Canyons – which, again, we have floated many times. The Green meets the Colorado River in Canyonlands National Park, and is subsumed therein. But the Green is the greater of the two source rivers, and I prefer to think of the whole as being the Green/Colorado river system. The upper end of the now much-shrunken reservoir called Lake Powell is found not far downstream of the lower end of Cataract Canyon. The reservoir formerly backed a considerable distance up into Cataract Canyon. This reservoir entombs 170 miles of  Glen Canyon. The lower-most (and still intact) 15 miles of Glen Canyon is found below the dam. We have twice motored up this stretch, which once sustained a trophy rainbow trout fishery. It is the sole remaining piece of the exquisite Glen Canyon. Where Glen Canyon ends, at Lees Ferry, the Grand Canyon of the Colorado begins. Besides the Rio Grande, where we have made our living since 1980, no other canyon and river (no other land form) has played a greater role in the spiritual life of myself and wife Kathy than the Grand Canyon of the Colorado River. “The river runs through it”.

Here is the link to my iBook, “The Grand, The Colorado River in the Grand Canyon, a Photo Journey and Visual Guide, 2nd. edition”: https://itunes.apple.com/us/book/the-grand/id672492447?ls=1

We drove north out of the Pinedale area, and camped that night alongside the Snake River, downstream of Jackson. I caught a couple of Snake River cutthroats on a Woolly Bugger that evening, and in the AM we drove downstream into Idaho

Camping alongside the Snake River, Wyoming