Sensational Carving, an Essay on Skiing for Ski Professionals 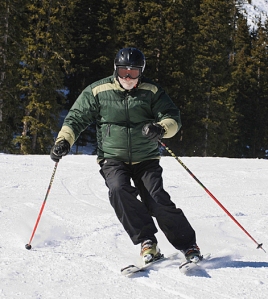 What do we most like about skiing? Isn’t it the sensations that are unavailable in everyday life?

The most basic sensation of skiing is that of smooth and unimpeded movement over the surface. This is, perhaps, a dream-like sensation, because such movement cannot be had otherwise. Bicycling, ice-skating and roller skating allow you to travel smoothly over the surface, but not with such a relative lack of hard contact with the surface as is the case with a typical snow condition such as packed powder.
Skiing powder provides a sensation of floating/flying through a yielding medium, and is prized because it is, again, unavailable elsewhere. I don’t think I’d get an argument from most skiers that powder is the most desired snow condition.
Jumping provides a sensation even more closely akin to flying (or what we imagine flying to feel like). I have a recurrent dream in which I jump off a bump, and then soar downslope, ever so lazily, looking at possible landing sites. When I land, it’s a soft and effortless touchdown. Unlike most, I like that dream. The sensation of jumping off a cliff and skiing away from the landing cannot be had otherwise, as is the sensation of upward flight from a jump with a steep kicker.
How about skidding? Many skiers do nothing but skid, and they have a lot of fun doing it. It’s the most common ski maneuver and therefore the most common ski sensation. I love the sensation of skidding, and the better you get at it, the more enjoyable it becomes. It feels secure, as well, and that is probably the reason why it is so hard to teach accomplished skidders to carve.
Related to skidding is gliding, which I would define as a skid on lightly-weighted skis, such as a turn on a bank accompanied by a strong up-motion. The French like to use the term “glissment”, which translates, more or less, to gliding. They feel that it is important to experience the sensation of glissment in skiing, as opposed to the sensation of being heavy on one’s skis. Another kind of gliding is schussing (straight running) – an especially exciting sensation derived from the speed of motion.

Throughout the decades that preceded the appearance of shaped skis, I tried (in vain) to carve. I just couldn’t do it. I knew it was possible, because racers did it … and then, out of nowhere, snowboarders did it! Snowboards had side-cut before skis. I was so envious of snowboard carvers that I was at the point of switching over, and then the Elan SCX showed up. A team of four Elan reps paid a visit to my home area, to show us what it was all about. It was revolutionary. I could carve!
Nowadays, I find the sensations of carving the equal of all the other sensations mentioned above. What do I feel when I carve? I feel a number of things: one is a joint sensation of connectedness and directedness. When carving, I feel that I cannot be knocked over. I am connected. And I feel that I have a trajectory. I am directed along a curving arc towards a predictable endpoint. This feeling of directedness could be described, also, as a sensation of precision, similar to, for instance, a pool shot direct into the pocket. Another feeling is the literal sensation of carving, as though I am slicing a roast with a super-sharp carving knife. (Duh … I guess that’s why they call it carving.) Or, similarly, the sensation of slicing through a piece of paper or cardboard with a brand-new razor blade. And finally, a carved turn provides rebound. The sensation of the skis springing out from under can’t be beat and is, moreover, the key to linking dynamic turns with rhythm and flow. This latter item is the sine qua non of high-level skiing, isn’t it? And, for my money, it’s the most satisfying set of sensations that skiing can provide.

Steve Miller received his Associate Certification from the Southern Rocky Mountain Ski Association in 1964. After a lapse in his ski teaching career, he received his PSIA Level 3 certification in 1984, and has been teaching skiing continually since then. Presently, he is a full-time ski instructor at Taos Ski Valley, and turned 72 this last February. He has authored many articles that have appeared in these pages. This particular article reflects a turning away from the more technical to the more visceral aspects of skiing.